Aside from legato soloing and crunchy riffs, one of Warren DeMartini’s most identifying trademarks is his now legendary snakeskin guitar, which was prominently featured when Ratt was in heavy video rotation during the early days of MTV. At the time, it prompted many young players (including one of our writers) to attempt applying snakeskin to their own guitars (we certainly hope no snakes were harmed in the attempt). With this year’s introduction of the Charvel Warren DeMartini Dinky Snake, you can put the faux snakeskin away — now it’s possible to own the “real deal!”

Besides its stunning serpentine looks, this is premium Charvel stuff. The guitar plays like a dream and has an instantly recognizable tone, especially when played through classic EL34-based amps. Additionally, the guitar sports custom appointments such as an Original Floyd Rose Tremolo, NOS Charvel brass strap buttons, and Schallers tuners. Charvel’s custom shop really outdid themselves when designing this one.

To say we fell in love with this guitar is to engage in understatement. There was little not to like — great tone and playability went hand-in-hand, though we would have preferred a noiseless single-coil pickup at the neck. And we can’t understate how many people used the guitar as a conversation starter with us the one night we took it out to a live gig. Guys thought the guitar was cool, and (more importantly) women thought we were cool. Now that’s rock n’ roll! Our only true disappoint with the instrument? Having to return the guitar, of course!

Wicked! Everyone who saw our faux-snakeskin wrapped Dinky did at least one double-take. From five feet back the guitar looks to be wrapped in snakeskin, and up close, the finish is something equally as spectacular. Renowned airbrush artist, Dan Lawrence, painted the unique graphic on the body and headstock, and the guitar has a special finish that we would best describe as “textured matte.” The finish has an almost synthetic, grainy feel to it — very unique, and happy it doesn’t soak up fingerprints, nor does it have a shiny reflective coat that would take away from the authenticity of the snakeskin appearance.

The guitar appears at first glance to be very similar to the Charvel San Dimas Style 1, featuring an alder body and a 22-fret, one-piece quartersawn maple neck. The neck features a compound radius (12” to 16”), jumbo frets, and a light oil finish. It measures 42.86 mm at the nut and 57.15 mm at the body.

Unlike the standard San Dimas, though, the DeMartini Dinky adds a few custom upgrades. First, this guitar replaces the licensed Floyd Rose tremolo with an Original Floyd Rose (some guitar players believe tone from the original model is superior to licensed models), the Gotoh tuners have been replaced with Schallers, and the strap pegs are NOS (new old stock) Charvel brass strap buttons.

The biggest difference comes in the tone department. While the San Dimas Style 1 has a pair of Seymour Duncan humbuckers (classic JB and ’59), the DeMartini Dinky has a different pickup configuration: Warren’s custom-designed Seymour Duncan RTM (Rattus Tonus Maximus) humbucker in the bridge, and a single-coil Duncan Quarter Pounder at the neck.

There are three other DeMartini Dinkys in the line, each featuring some killer guitar paint jobs from other guitars in DeMartini’s collection: Crossed Swords, Bomber, and Blood with Skull. Those guitars are similar to the Snake guitar except that they lack a neck pickup and blade selector — only the Duncan RTM humbucker is present.

A three-way blade switch provides for pickup selection, and there is a single Volume knob. The absence of a Tone control is fine with us, as players of “Super Strats” always leave those turned up all the way, and removing the extra pot keeps output levels as hot as possible. It sounds cliché to say a guitar “plays itself” but the DeMartini Dinky does exactly that! The feel of the neck is about as comfortable as you’ll find, and has a few of us wondering how we’re going to go back to playing our other guitars with less sublime necks! The jumbo frets were just right for big bends or subtle vibrato, and access to the higher frets was similar to most Strats — the large neck heel can get in the way for players with smaller hands, though it didn’t bother most of us.

Additionally, we found no raised frets, “choke out,” or sharp edges which we have encountered way too often on certain production model guitars. Intonation was “spot on” with chords playing in tune across all positions.

Our evaluation model had a slight bow in the neck (no doubt due to the fluctuating temperature in our studio). This required a quick truss rod adjustment, and although the truss rod is located in the dreaded heel position of the neck, it features a clever “turret” design that simply requires insertion of an Allen key to make the adjustment – no removal of the neck required!

One of the guitar’s custom appointments, the Original Floyd Rose performed exactly as one would expect, which is to say we couldn’t even fake being out of tune after dive bombing violently into the pits of hell, or raising the pitch in our best Steve Vai and Joe Satriani impersonations.

So how does it sound? Will the tone of this guitar make you a “Wanted Man” or will it have you exclaiming, “Shame Shame Shame?”

When it came time to “Lay it Down” (ok, enough Ratt jokes already!) we went right for the jugular and plugged our guitar into a 1972 Marshall Super Lead with everything on ten. Let’s face it, this guitar is built to rock, subtleties be damned! The result was instant ‘80s rock vibe which made us cycle through every Jake E. Lee, Ratt, and Van Halen riff we knew.

The custom RTM pickup is best described as an Alnico II version of the legendary Seymour Duncan JB. The JB (an Alnico V based pickup) is known for its upper mid-range spike and great crunch. The RTM also has a very pronounced mid-range, but it seems to be shifted towards the low-mid end of the spectrum, providing a percussive punch lacking in the JB. Also, the Alnico II magnet rolls off lows and highs (picture a frown-shaped EQ curve) making it more compressed and squishy sounding than Alnico V pickups, while still maintaining the classic humbucker crunch – great for anyone looking to cop the fabled “Brown Sound.”

We liked the RTM so much that we almost forgot to test the Duncan Quarter Pounder in the neck slot! A favorite of Ritchie Blackmore for years, the Quarter Pounder is best described as a single coil on steroids. As a standalone pickup, it works quite well for vintage clean tones, or under moderate gain for single note soloing. However, being a true single coil pickup, the Quarter Pounder isn’t hum cancelling — it delivers some obvious 60-cycle hum when played under high gain.

We would have preferred the middle position of the toggle switch (which combines the bridge and neck) to be wired for hum cancelling, but this is a signature guitar, and DeMartini gets to have the tones he wants in it. Who are we to nit pick?

And when you are not “getting the shred out” on your DeMartini guitar, you can rest assured that it will be safe and sound in the accompanying hard-shell case, which is also adorned in faux-snakeskin!!

Our guitar came packed with the necessary Allen keys as well as a useful instruction manual (basically an Electric Guitar 101) that covered everything from restringing and adjusting a locking tremolo to adjusting the Tone knob.

You can get your hands on a standard San Dimas Style 1 guitar for less than half the price, and it will feel nearly the same in your hands (which is to say, great). But the DeMartini guitar isn’t about just being another Super Strat. The guitar has a beautiful custom tone, and the snakeskin finish is guaranteed to turn heads at your next concert.

If you have the courage to take the stage wearing this guitar, you are a bona fide rock star in our books — even without actual fame! How can you even begin to measure the value of that? 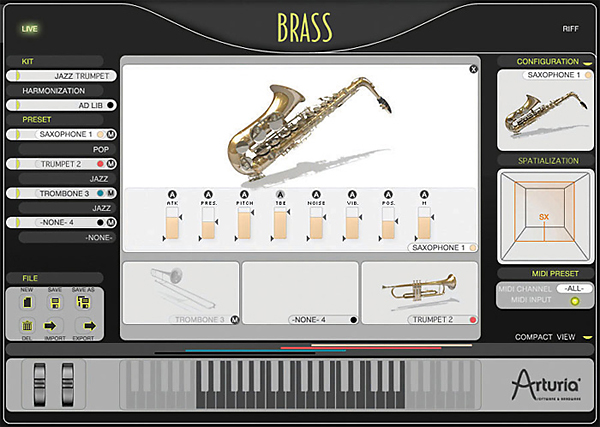 Getting an Endorsement Deal