The Rocktron MIDI Mate is a well-constructed and easy-to-use MIDI foot controller. Its compact footprint and simple layout combined with an easy-to-read display make it a great controller for guitar preamps and a decent performer for controlling your effects processors.

We found that its use of a 2nd function button for changing banks of sounds was inconvenient and awkward, especially for use in a live situation where you’re making changes rapidly, but we liked the Controller mode that enabled us to select from five patches at a time while having direct access to five continuous controllers plus an external expression pedal.

While you can accomplish complex programming with relative ease, the MIDI Mate’s functional operation and layout left us wishing for a few more CC pedals and dedicated bank Up/Down buttons. Still, we loved using it as a simple patch selector/controller for our Mesa/Boogie Triaxis guitar preamp.

If you would prefer to control your rack-mounted preamp from its own dedicated controller (independent of your effects) as we sometime do, the MIDI Mate is a perfect solution, but it is less suited to controlling complex MIDI rigs than some similar products within its price range, or the significantly more advanced (but more costly) Rocktron All Access.

If you’re new to using MIDI foot controllers, we have an in-depth tutorial on the subject that you may wish to read before diving into our foot controller product reviews.

The MIDI Mate is easy to use, and we had no trouble controlling a TC Electronic G-Major and a Lexicon MPX-1 with it.

The foot controller starts out in Program Change mode, and an Access button lets you step through its three operating modes: Bank mode (ten pedals let you directly select effect presets from within a bank, and then bank Up/Down buttons switch between banks), Instant mode (press two buttons to directly select presets without having to change banks), and Controller mode. We had no problem assigning Program Change messages to a single pedal so that both of our effects processors could be set to new presets at the touch of a single button.

The bank Up/Down buttons are actually secondary mode buttons that share pedals #0 and #1. To change banks of patches, you have to first step on a 2nd function button that converts pedals #0 and #1 to Up/Down selectors and then either step on a button #3 through #9 to select a program in that bank, or you have to step on the 2nd function button a second time to exit that mode – necessary if you want to select patch #1 in the new bank.

Programming the MIDI Mate is straightforward, but we had some confusion initially activating the CC pedals. After assigning CC numbers to the pedals and to the expression pedal input, you have to assign the pedals to specific MIDI channels before they are enabled on the foot controller. Once we did this, everything worked fine.

The pedals only function as latching devices, so if you have an effect processor that requires momentary pedals for features such as Tap Tempo, the MIDI Mate may not work for you.

Additionally, we attached a Roland EV-5 Expression pedal and had no difficulties controlling various parameters in our G-Major.

The documentation provided with the MIDI Mate was excellent and shouldn’t scare away novices. It guided us through easy procedures for most of our configuration efforts, the only caveat being that it wasn’t obvious that we needed to assign the CC pedals to specific MIDI channels before they would function. A one-minute call to Rocktron’s knowledgeable technical support resolved this issue.

There are no support documents on the Rocktron Web site for any products at this time – only downloadable copies of the User’s Guides. Other vendors provide various help documents related to using their MIDI foot controllers (and other gear) online, and we think it’s time for Rocktron to step up and add this useful service.

The Rocktron MIDI Mate ($229) typically sells for near $160. Given its simple functionality with secondary mode switches and only five CC controllers, we think it is a little expensive compared to some of its competitors. 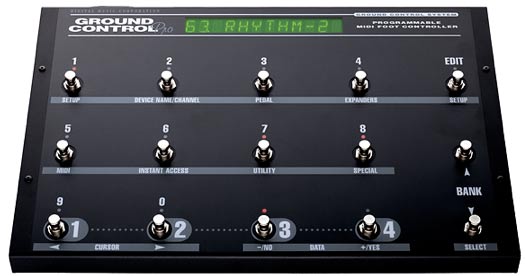