These days, it’s fairly common for records to be made by musicians located in various places other than actually being in the same studio with each other. Engineers and artists are routinely recording tracks and then FTPing them to each other (or using file-sharing services like YouSendIt and Dropbox). While this back-and-forth file sharing certainly works, imagine if those musicians could just get together for an hour or two to jam and work through various musical ideas in real time. Thanks to jamLink from MusicianLink, fantasy has now become reality, and this product will forever change how some musicians make music.

It pains us to think that such an incredibly useful tool sat unused for a year in the MusicPlayers.com studio, but after seeing a remote jam demo at the 2011 NAMM Show with a few typical trade-show glitches, we hadn’t been floored by it and subsequently hadn’t given the product much serious thought. Our loss, indeed.

With a jamLink box attached to your high-speed network as well as the network at your collaborator’s studio, and subsequently connected to headphones, a mixer, or PA system, this very affordable solution enables real-time musical collaboration between players in different locations — without latency (or at least, not enough to matter)! And if that’s not incredible enough for you, up to four musicians in remote locations can jam together.

With uncompressed audio that sounds pretty good, jamLink is astounding in that it really works — it enables you to jam in real time with remote musicians. Whether you’re seeking a solution for one specific musical project or you’d just like to find random musicians to jam with, jamLink has you covered.

The social networking aspects of the MusiciansLink.com website facilitate getting together (virtually) with other musicians to jam. But for bands whose members struggle with the weekly commute to the studio, or for musicians looking to collaborate on recording projects remotely, there is nothing else quite like jamLink. Our lives have been forever changed by this product. The jamLink audio interface is a small, half-rack-sized box that you connect (via an included Ethernet cable) to your high-speed Internet service, such as Verizon FIOS, Optimum Online, etc.

Other connections to the box include a headphone jack, an1/8” stereo output jack, a quarter-inch mono instrument input jack, and power (provided by a typical external power supply with an inline wall-wart).

Control of the jamLink box happens via your Web browser. After you’ve created a free MusicianLink.com account and registered your jamLink’s MAC address (a network device serial number, not a Macintosh computer), logging into the system enables you to launch a window containing the virtual mixer. From within this mixer, you can adjust the relative input and output levels of your mixer and the inputs (and panning) coming from up to three other musicians.

At present, audio is delivered at up to 48k, uncompressed, in mono, with just a single remote connection. As you add multiple remote collaborators, you do introduce latency that requires compensation by reducing the audio quality to a lower resolution.

Latency is as low as 6.7 ms (with just two connections), far beneath any threshold at which you would begin to be disturbed by the latency.

There’s got to be a catch, right? Otherwise, everyone would be using this! The only limiting factor to performance comes from your Internet connectivity, and the jamLink is recommended for use connecting musicians living within a 500 miles radius — an obvious deal breaker for certain musical collaborations. Without going into the kind of techno-babble discussion that network engineers love, here’s our brief synopsis of the issue: various points on the Internet connect to each other via routers, and passing packets of data through one router to another increases the “hop count,” which in the jamLink realm translates to latency. There are always going to be multiple routers in between you and your friend’s computer — especially the further away he/she lives, and if you’re both connected to the Internet from two different Internet service providers, multiple hops are inevitable.

If you work for a record label or production company with two studios separated by thousands of miles but the company has invested in a dedicated (private) wide-area-network, jamLink might work fine as there aren’t multiple hops between site A and site B. Bottom line: 500 miles is the approximate recommended distance, but depending on your Internet connectivity at each end, you might obtain better results, and across greater distances.

It only took us a few minutes to get up and running with jamLink, and the web-based portal and Java-based mixer application worked fine regardless of what computer you have, Mac- or Windows-based. In fact, our tests ran cross-platform, with a Mac at one end and a Windows PC at the other.

Note that there is a minimum upload bandwidth requirement of 1,000 kbps, and MusicianLink provides a free bandwidth test on their website to make sure you’re capable of using the service.

Damon Fibraio, keyboard player for Days Before Tomorrow (the prog rock band featuring our own editor in chief Scott Kahn and senior editor, Derek Davodowich), is 100% blind, and as such, he is reliant upon other people to transport him and his gear to rehearsals in our private studio — easily an hour drive from his home. We set out to use jamLink in such a way that he could participate in band rehearsals even on those nights where he didn’t have any transportation.

All we really need to say about Usability is this: “so easy to set up even a blind person can do it.” The screen reader on Damon’s PC had no trouble reading the information presented in the streamlined interface, and it took less than 45 minutes for us to get things plugged in, figured out, and a link established. But we love to write, so here’s a bit more detail.

The actual setup was as follows: we connected the 1/8” stereo jack (we would prefer quarter-inch in the future) from the jamLink box to a pair of inputs on our PreSonus StudioLive 24.4.2 mixing board, which is used for both live PA purposes as well as the front end to our Pro Tools 9-based recording studio. We took one of the monitors sends from our StudioLive mixing board and connected that to the quarter-inch input on the jamLink box.

In the remote location, our keyboard player Damon had a Yamaha 02R mixing board for his home studio keyboard rig, and he set up in a similar fashion at his end.

Once we established a remote connection with Damon and brought his channels up in the PA system, we were able to rehearse as if he were in the room with us. Because our band utilizes in-ear monitors, the drums and guitars were already miked in our studio, so sending Damon a mix of the band was simple. And because we were using one of our monitors sends going to the jamLink, we were able to give him a custom monitoring mix just as if he were listening to his personal in-ear monitor mix on the evenings he attended rehearsals in person.

While working on songwriting, we often times record the material in Pro Tools. Because the jamLink was running into a pair of channels on our StudioLive console, it was just as easy to record keyboards as if Damon were playing in the room with us. JamLink delivered an ability to work in ways we’d never been able to do before.

Obviously, the biggest variable in performance comes from the speed of your Internet connections, the distance or hop counts, etc. And over a period of a few months, we found some variability in the latency. Some evenings, Damon was playing along with us just fine in real time, but other evenings, there was enough latency such that he was hearing us fine, but his performance was coming back to us a few milliseconds off.

The jamLink provides some controls to combat latency, by reducing the bit rate of the streaming audio, so on evenings where the Internet wasn’t cooperating with us, we were able to reduce the audio quality in order to improve the response.

Tip: In case you’re wondering how to communicate with your remote collaborators, just make sure you have a microphone set up in your mixer. You can either speak into mics running into your PA system (like us) or set up a dedicated talkback mic at your mix desk.

Overall, we were impressed with the audio quality from jamLink. Just being able to play with someone 100 miles away as if he were in the room with us was miraculous enough, and we didn’t feel the need to hold this solution to studio standards for audio. That said, what we heard coming through the PA system sounded like the keyboards we were used to hearing played live in the room with us.

The obvious limitation in some cases — like with our remote keyboard player, is that jamLink is presently a mono-input solution, and our keyboard player has a nice stereo rig. The hardware has a stereo interface on the outputs, so if you have multiple musicians collaborating via jamLink, you can pan their parts across the stereo field. But it would be cool to offer full stereo operation in the future. For live rehearsal purposes, though, or with guitar-centric material, mono should be just fine for the majority of musicians.

On a few occasions, we experienced a random audio glitch or two that hit us painfully through the PA (like a loud crackling sound), but never did we encounter a scenario where we thought the jamLink presented an unworkable solution.

JamLink came with useful documentation that had us up and running in minutes. Additionally, there is a useful FAQ document on the website, as well as a video introduction to the product.

The jamLink service is free, and there are no service contracts required — all you need to do is purchase the hardware. A single jamLink (MSRP $249.99 each) presently sells for $199.95, or you can purchase a pair of devices for $349.95.

If you’re a remote collaborator by trade or just a hermit, get a single unit and look for people to collaborate with via the jamLink social network. If you’re getting tired of commuting to band rehearsals and you have PA system with a spare monitor send, pick up a pair of these and stay home now and then. 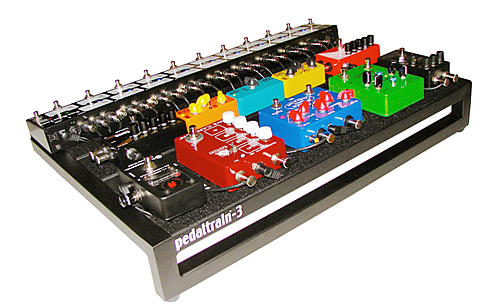