LOS ANGELES, CA, USA: Black-owned Eurorack modular synthesis and electronic musical instrument manufacturer Modbap Modular is proud to debut Trinity — the fourth entry in its expanding Eurorack product lineup as a three-channel DIGITAL DRUM SYNTH ARRAY, as the appropriate wording on the distinctive-looking, triple-colour-highlighted-branded front panel in reference to effectively performing as three powerful drum voices packed into a 20HP module with a tip of the proverbial (electronic hi-) hat to the typical (kick, snare, and hi-hat) core elements of any modern beat-driven composition subtly suggests, albeit with some neat production tricks thrown into the musical mix — at Knobcon Number Ten, a one-of-a-kind synthesizer convention now in its tenth year, held just outside of Chicago, IL, USA, at the Hyatt Regency Schaumburg, September 9-11…

“Trinity has evolved over time to become what it is today.” Modbap Modular founder/owner/designer Corry Banks is perfectly positioned to introduce Trinity to the musical masses, historically highlighting its interesting journey getting there thusly: “I wanted a drum module that would allow me to have a simple-yet-smacking kick, snare, and hi-hat in one module. I also wanted to play outside of that simplicity with malleable percussion synthesis. Trinity had to have a degree of hands-on control, together with a good deal of CV and/or MIDI control. I get into sound design, too, so Trinity had to serve me well in that area, and it does not disappoint. Trinity is all of that, while finding a way to introduce a few interesting and fun quirks as well.” 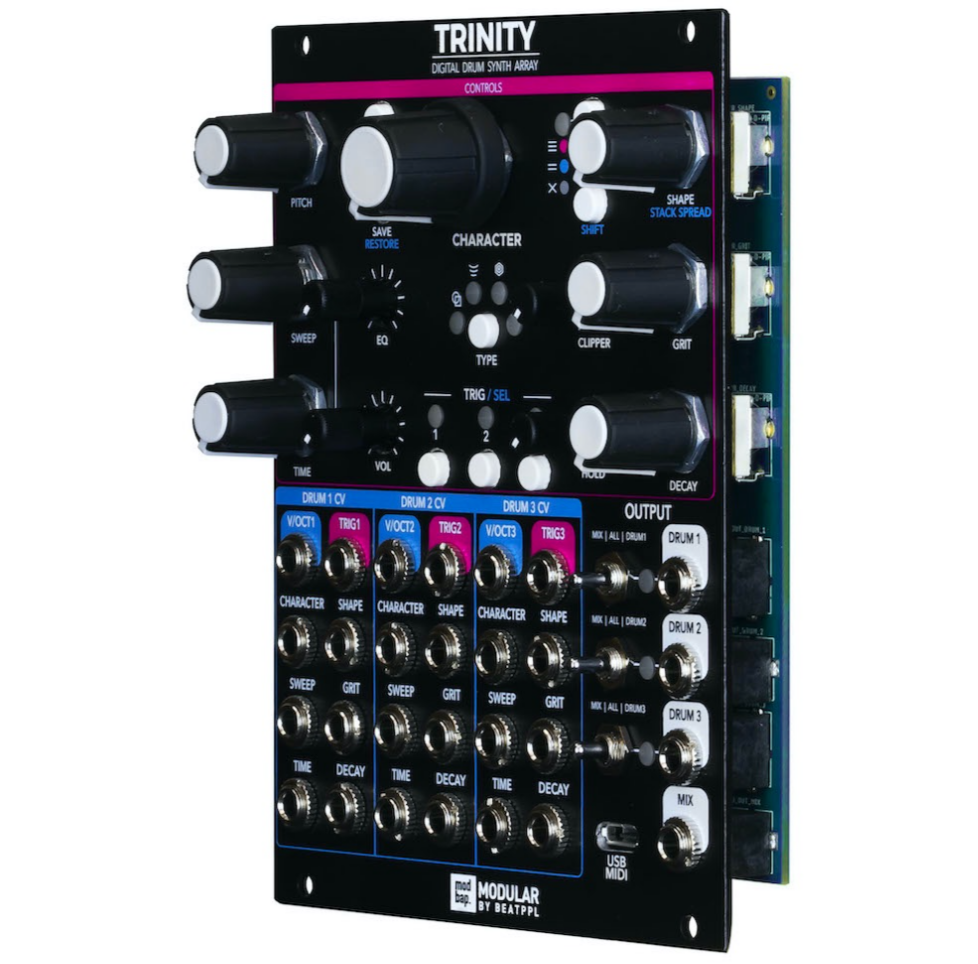 With that being said, Trinity takes the simple idea of tipping the proverbial (electronic hi-) hat to the typical (kick, snare, and hi-hat) core elements of any modern beat-driven composition and flipping that on its head by combining its three channels with an array of drum synth algorithms that use various synthesis types — namely, BLOCK (analogue-inspired drum synth building blocks featuring a sine and triangle core; great for traditional electronic drum creation), HEAP (additive drum synth with 12 partials; great for fun, natural sounds and pitched, percussive sounds), NEON (FM drum synth engine; great for high-quality FM drums, clangorous metallic percussion, and more), and ARCADE (quirky noise generator synth, reminiscent of classic Eighties-era arcade games with zaps, crashes, explosions, and more; great for claps, hi-hats, and even some vinyl noise approximations, as well as all sorts of fun percussion and degraded noises) — to allow for a wide variety of drum design capability that achieves and reaches far beyond the conventional. Clearly living up to its front panel-positioned DIGITAL DRUM SYNTH ARRAY wording, which immediately steers its users into a certain way of thinking, Trinity’s array of digital drum synth algorithms are very malleable, thanks to the seven sizeable knobs and four mini-pots positioned in the upper half of that distinctive-looking, triple-colour-highlighted-branded front panel. Put it this way: each control a specific parameter and characteristic — PITCH, SWEEP, TIME, SHAPE, GRIT, DECAY, EQ, CLIPPER, HOLD, VOL (volume), and, of course, CHARACTER — for each drum voice. The three — DRUM CV1, DRUM CV2, and DRUM CV3 — channels each have their own TRIG (trigger) and V/OCT (one-volt-per-octave) inputs in addition to extensive CV input options, all available for front panel-positioned patching purposes.

Trinity takes its capabilities several steps above and beyond anything comparable in the modular Eurorack world with cyclical (C. MODE) options offering round robin and random playback, as well as two STACK modes. Musically, round robin cycles through the drum algorithm types one after another with each trigger, while random randomises the parameters of a channel’s chosen drum algorithm type with each trigger. Those STACK modes are inspired by the characteristics of chopped breaks where drums tend to overlap and fan out, depending on the content of the chopped source material. Trinity’s take on that allows the second and third drum channels to be triggered by the primary channel’s TRIG and V/OCT inputs; in addition, ‘secondary’ STACK SPREAD functionality allows for fanning out the stacked drums to taste. 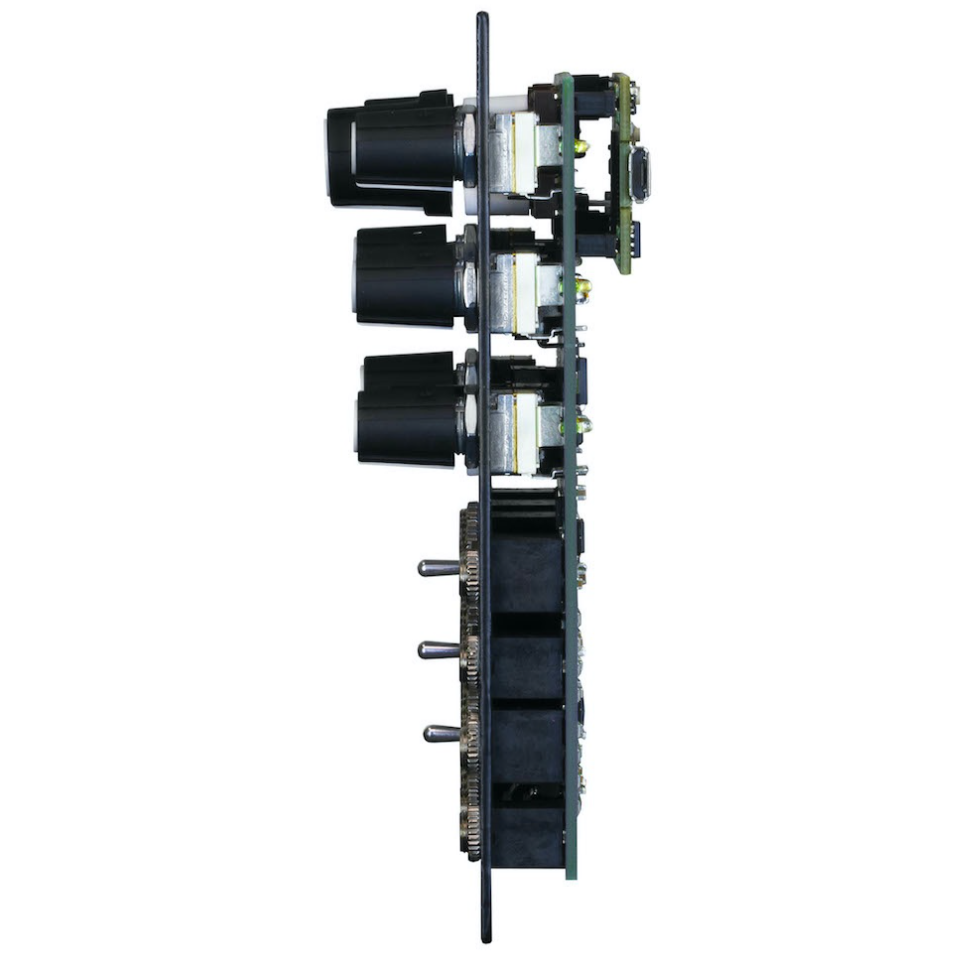 Trinity’s uniquely performable and switchable OUTPUT matrix allows for the routing of each drum channel’s output to the MIX output, the individual — DRUM1, DRUM2, and DRUM3 — output, or ALL. As such, easy performability, mutability, parallel processing, or side chaining are all perfectly possible.

All in all, then, Trinity packs a hefty percussive punch, weighing in at a 20HP width with 11 knobs, three drum channels, three trigger buttons, four drum algorithms based on four different synthesis types, 24 CV inputs, three-output switching with three individual outputs, a mix output, and MIDI-over-USB connection belying its 26mm depth. Concludes Corry Banks: “I think we’ve achieved a good deal more than we even initially set out to do with Trinity.” That’s really saying something — all the more so since the truly talented individual concerned holds an Associate’s Degree in Electronics, a Bachelor’s Degree in Technology Management, and a Master’s Degree in Project Management! After all, Trinity truly is a percussive powerhouse of synthesis — so much more than a simple-yet-smacking kick, snare, and hi- hat in one module, but rather a Eurorack module like no other... one which is bolstered by its inclusion of a bunch of really dope-sounding synth algorithms with which it does not disappoint. 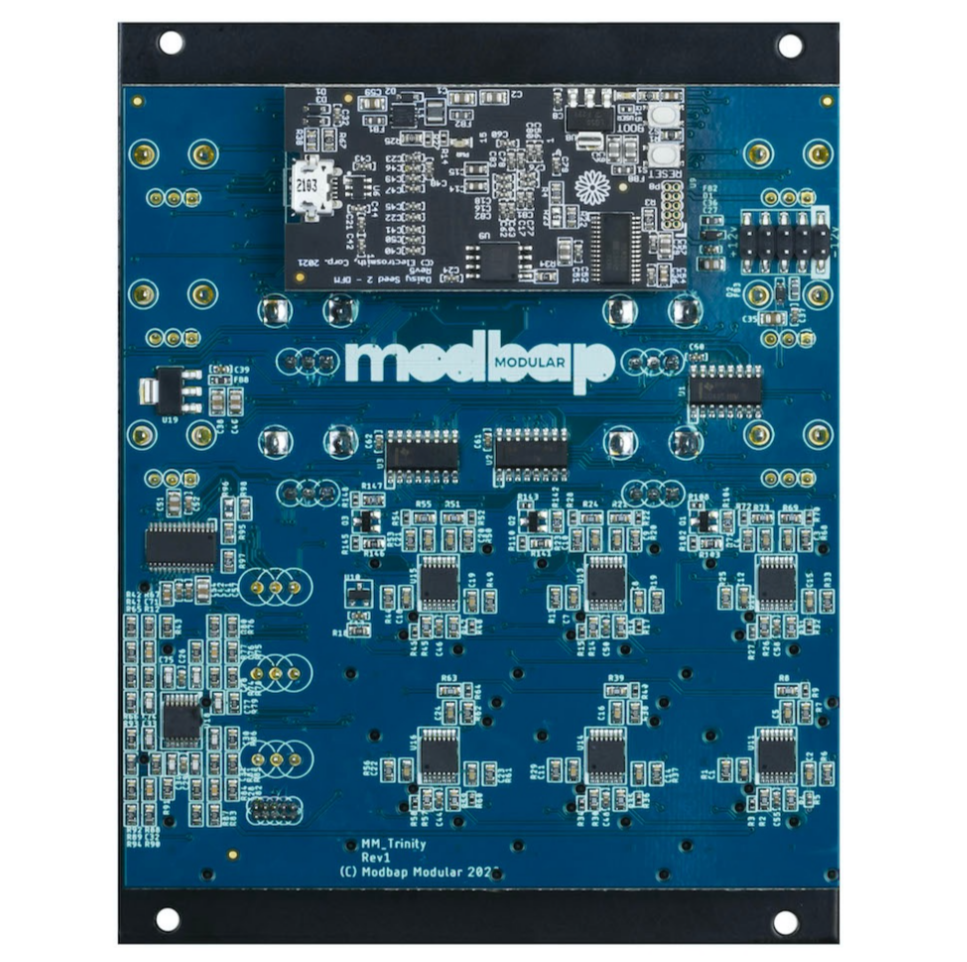 Duly making its debut at Knobcon Number Ten, a one-of-a-kind synthesizer convention now in its tenth year, held just outside of Chicago, IL, USA, at the Hyatt Regency Schaumburg, September 9-11, anyone wishing to see (and hear) Trinity in action in advance of shipping should seriously consider checking it out there — assuming, of course, that they are in the general vicinity or prepared to travel at short notice if not already attending. 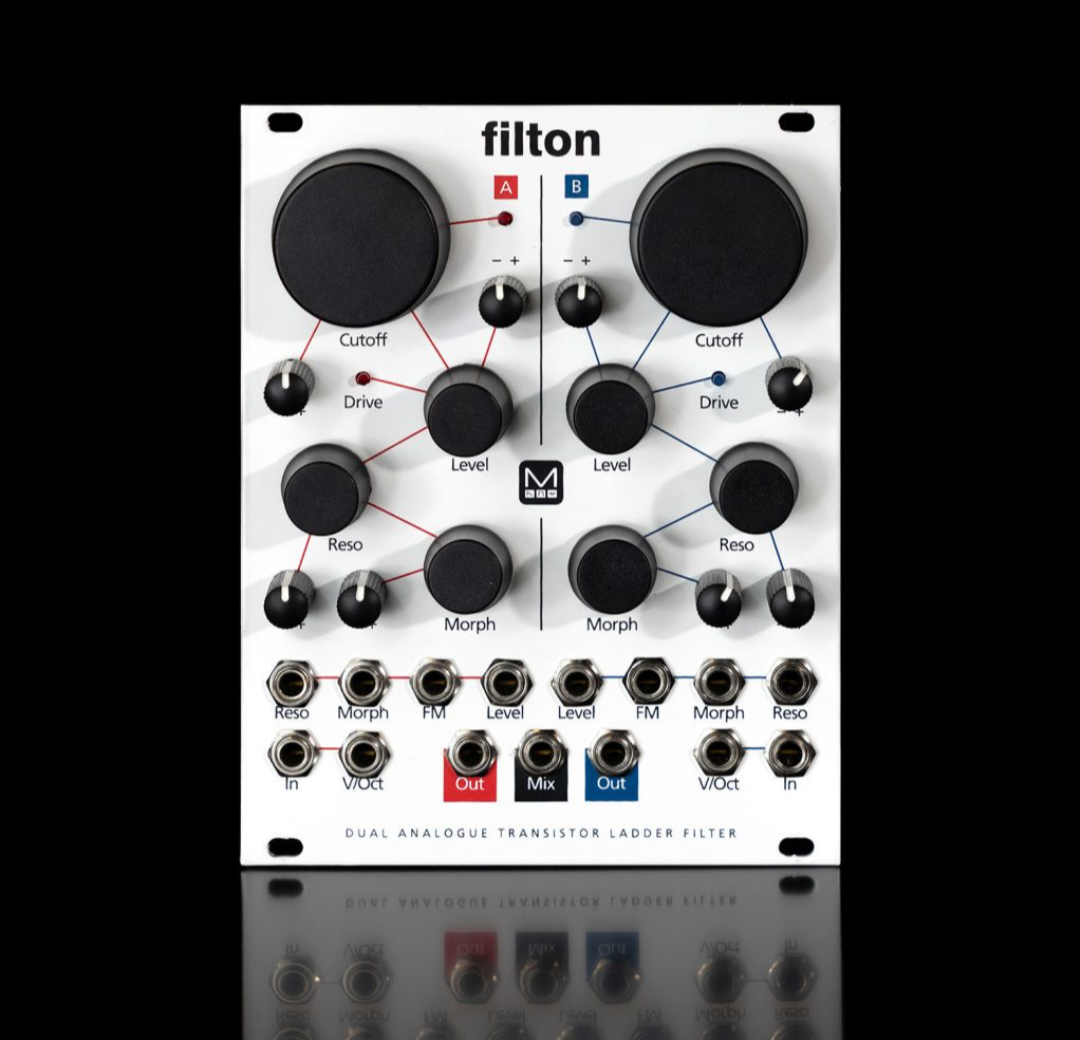 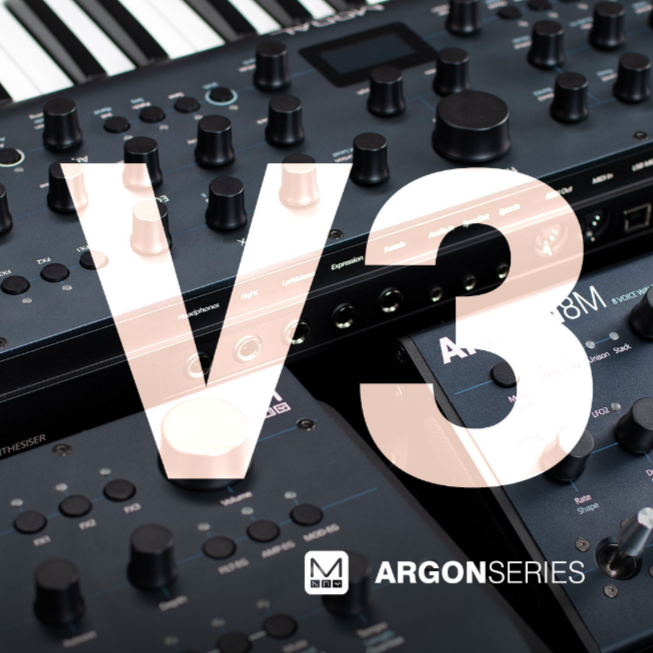