The list of famous guitarists who have played a Fender Deluxe Reverb over the years is too numerous to mention—it is a historic amp. 22 watts may not sound like much on paper, but when it came to decibels and SPLs, the classic amp is one loud beast, not to mention heavy as well.  So what would make a player interested in an all-digital, solid state version of a Fender Deluxe Reverb when you can get modeling amps that have many more different amp choices? Maybe you decided that’s the tone in your head and you want to play a Deluxe Reverb, but you’re not sure if you want a hand-wired tube amp, an all tube but not hand wired, or now a solid-state digital version. Or maybe you have the tube classic but want another amp for gigging that doesn’t break your back and doesn’t have the noise of a tube amp? Maybe you are looking for an amp that will also serve the purpose of enabling direct recording while still delivering classic Fender tone at the same time?

Modeling amps have come a long way since their inception. The modeling amp world typically tries to cram an overwhelming number of different amp models into a small and economical configuration. But Fender surprised the music world a few years ago with a different approach. They proposed, how about we make digital versions of our beloved amps that recreate the sound but with added features and at half the weight to make them easier to lug around? Sometimes you don’t want or need 200 options and all you want is great tone in a reliable and light weight package. And that’s where a product like the Tone Master Deluxe Reverb comes in:  a lighter weight, worry-free design with the classic Fender sound.

This second version of the Tone Master Deluxe Reverb has a few enhancements under the hood as well as aesthetically that will make even the most die-hard Fender tube amp fans think twice. Now if you like a loud, all-tube amp and don’t mind the weight, then you may not be very interested in this amp. But if you're looking for a much lighter version of the Deluxe Reverb without the hassles of tubes, then you may be pleasantly surprised what Fender has for you.

The Tone Master Deluxe Reverb Blonde amp uses impressive digital processing power to achieve faithful modeling of the 22-watt Deluxe tube amp. Key features include a 100-watt digital power amp, single 12” Celestion G12 NEO Creamback speaker, rear-panel output selector for full power and five lower-wattage, attenuated settings, and balanced XLR line output with two built-in impulse response (IR) cabinet simulations (for recording direct or direct to a PA). All of this translates into an amp that is half the weight of an all-tube Deluxe Reverb. In addition, the Blonde version (reviewed) has the virtual bright cap removed on the Vibrato channel which makes it more tamable when using overdrive and distortion. 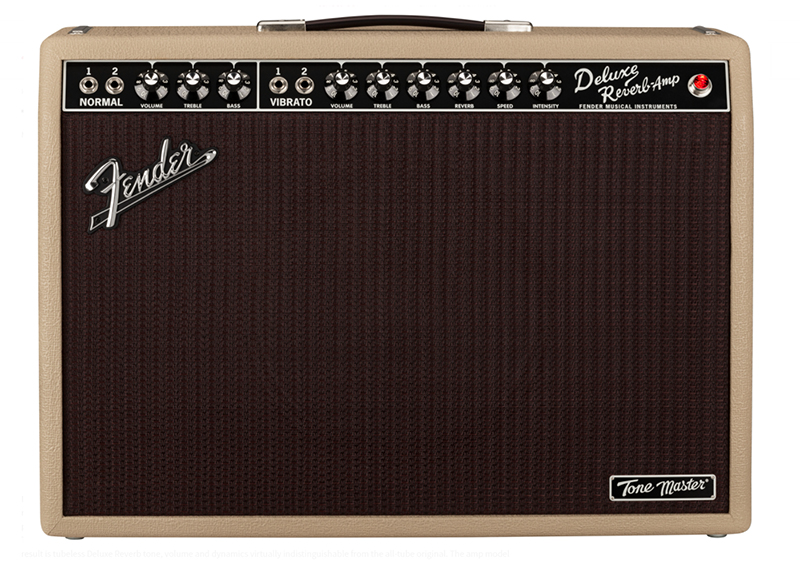 The pine cabinet is covered in a blonde textured vinyl with an oxblood grille cloth and black front panel. The jewel light is red for power on, red/amber for warming up, and amber when in standby. The amp handle on the top is a molded plastic with nickel-plated caps. This version of the Tone Master Deluxe Reverb is equipped with a Celestion 60 Watt 12 inch NEO Creamback speaker rated at 8 OHMs.

The amp has two channels and two hi/low inputs for each channel. The Normal channel is straightforward with a volume control and treble and bass controls that go from 1-10. The Vibrato channel has separate volume, treble, and bass controls with added reverb control along with vibatro speed and intensity controls.

The back of the amp includes a power switch, a mute switch (which can mute the speaker when you are going direct), output attenuator section, a balanced XLR line out section with cabinet simulator, volume and grounding switch, a footswitch jack. The first IR cabinet simulation is based on a Celestion speaker mic’d with a traditional Shure SM57 microphone and the second IR response utilizes a Sennheiser MD421 microphone. There is also the option to use the direct output without IRs (so you can use your own in the recording process). 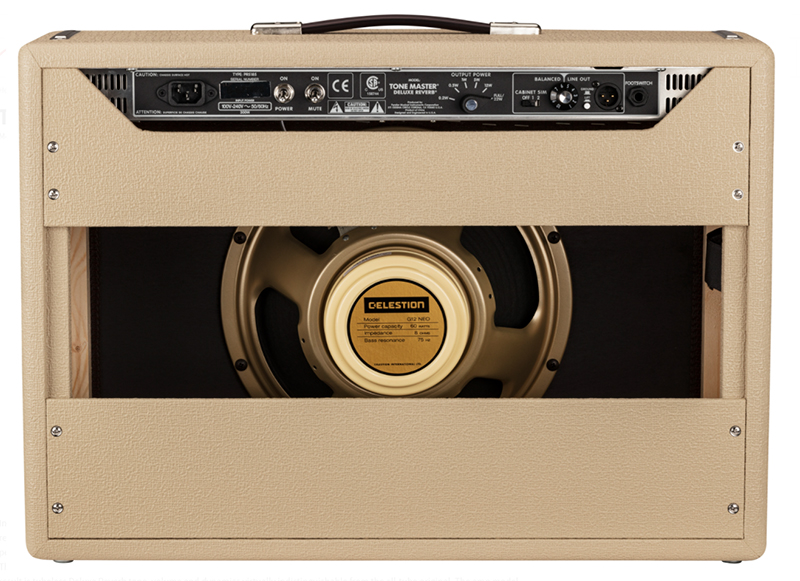 The six-way attenuator located on the back panel of the amp provides the flexibility of running at full 22 watt “perceived” power (because the digital amp is really rated at 100 watts) or dropping down all the way to 0.2 Watts. In between, there are 12 watts, 5 watts, and 1 watt settings. To achieve “bedroom level” you’ll want to drop down to 0.2 or 0.5 Watts.

The amp includes a cover and two-button footswitch for vibrato and reverb. Surprising for an amp that offers silent recording and attenuated volume output, there is no headphone jack for silent practice.

First and foremost, this looks and feels like a classic Fender amp and not some weird space odyssey.  There are no special buttons or digital screens to fish through on the front or top of the amp.

First choose the overall sound you want from the amp then choose the desired power level/attenuation to run it at and you have an amp that works anywhere from a large stage to your bedroom or silently for direct recording. The two inputs on each channel gave slightly different gain options.

For the direct output via an XLR mic cable, we liked that we could mute the speaker, which is great both for recording as well as stage gigs where you rely on in-ear monitoring.

Functionally, using this amp is really no different than dialing in any other Fender Deluxe Reverb amp, which is to say, it’s as straightforward as other classic Fender designs.

The most important question on everyone’s mind is, does this actually sound like an all-tube Fender Deluxe Reverb? Well, we can say decidedly that yes, it does. During one of our neighborhood jams, we were jamming on a tune when in walked another guitarist with—you guessed it—an all-tube Fender Deluxe Reverb! This gave us the chance to test them side by side. Now, that amp had a different speaker that was also broken in but we were able to make a pretty good comparison nonetheless.

As Fender states, it's “virtually indistinguishable” and we would agree with that remark, especially when playing with the full band. There were some small sonic differences but it was hard to say how much of that had to do with speaker differences or the amp circuitry. Regardless, it was damn close, with (importantly) touch and response that were very similar, and the amp responded well to changes in our volume and tone controls on the guitar—which is not always the case with modeling amps. We do have to admit there was something slightly more organic sounding/feeling when playing through the real tube amp, but if we didn’t have both amps side by side, we don’t know if we would have really noticed a difference.

How was it with pedals and different guitars? We ran the gamut of our Strats and Teles with single coils, our humbucker equipped Gibson Les Paul, a P90 Gibson Midtown, and a P90 Epiphone Les Paul Special, and all sounded great through this amp and through direct recording into our DAW.  With the amp on clean settings, we tested a number of pedals to hear how various gain pedals sounded. As you can imagine a tube screamer was well matched to this amp, giving a nice mid-range overdrive. But we were particularly surprised with our Friedman BE-OD that sounded really good with high gain settings, delivering nice chunky distortion that didn't fuzz out. Throwing in an Electro-Harmonix Big Muff, the amp also sounded great with fuzz tones.

Then of course we ran our phaser, Univibe, delay, wah and each of them performed as expected with no muddiness. The verdict is clear: This amp takes pedals great! And although the amp sounds perfectly Fender-ish just plugging straight into it, we really liked it with our newest pedal acquisition, a Hudson Electronics Broadcast-AP pedal which is a great “always on” pedal whether you just need a little clean boost on the front end or some fuzz or overdrive.

The reverb in our opinion sounded best at levels in the 2-3 range, and not cranked up. The vibrato sounded fantastic when dialed into its sweet spot. As Kenny Greenberg describes in his demo videos, it sounds best “not too slow and not too fast.” With the intensity control it was easy to make sure it didn’t get lost in the mix during our live jam. Both reverb and vibrato can be turned off on the vibrato channel with the footswitch. But if you don’t need reverb or vibrato you have the stripped down channel 1, but regardless which side of the amp you plug into, the overall tone from each channel is the same.

Have you been relying on models of Fender Deluxe amps in your DAW for tracking? Our final test set out to determine if this amp would serve us better for tracking in the digital domain. And here again, we were pleasantly surprised. In this amp’s case, it sounded almost just like the amp. With cabinet simulation bypassed you get the brightest tone and sometimes a fuzzy tone depending on the amp settings and guitar. The SM57 emulated output mode gives a warmer sound while the Sennheiser option is the darkest. Tweaking the treble and bass we were able to get a great amp sound into our DAW, which really adds to the versatility of this amp. You're almost certainly going to want to use one of those two IR cabinet responses, but if you have your own IRs provided via products like Two Notes’ Wall of Sound or hardware like an Axe-FX, you can obtain even better sounding Fender tones.

Of note, the attenuator works only for the external Celestion speaker and not when going direct. As a result, you can’t use it to lower the master output and then overdrive the gain stages to vary your tone as you can with various tube amps. The attenuator is strictly for volume reduction—not tone alteration.

Fender has a variety of tasty demos so you can hear for yourself how authentic this digital Fender amp sounds. Check out Kyle Deandre from Fender run through both the Deluxe Reverb and Twin Reverb here:

Also, Fender produced a fantastic series called “Plugged In” with Kenny Greenberg.  Episode 1 is about dialing in your amp with the Tone Master Blonde amps. Episode 2 is about recording with these amps and episode 3 is about finishing your track. Head on over to YouTube to see these great videos:

The Tone Master Deluxe Reverb comes with a very basic two-page manual, but that’s all you need with this amp. The Fender website provides information on how to install firmware updates should the amp receive future enhancements.

The Fender Tone Master Deluxe Reverb Blonde Amp costs $949. Given the quality of the tones from the front of the amp as well as options to record direct or go direct to a mixing board with no stage noise, we think this is a fair price. A standard ‘65 Deluxe Reverb tube amp reissue will run you $1,199 while a hand-wired ‘64 Custom Deluxe Reverb will run you $2,499. Neither of those feature an attenuator or direct output/recording—and they are heavy!!! 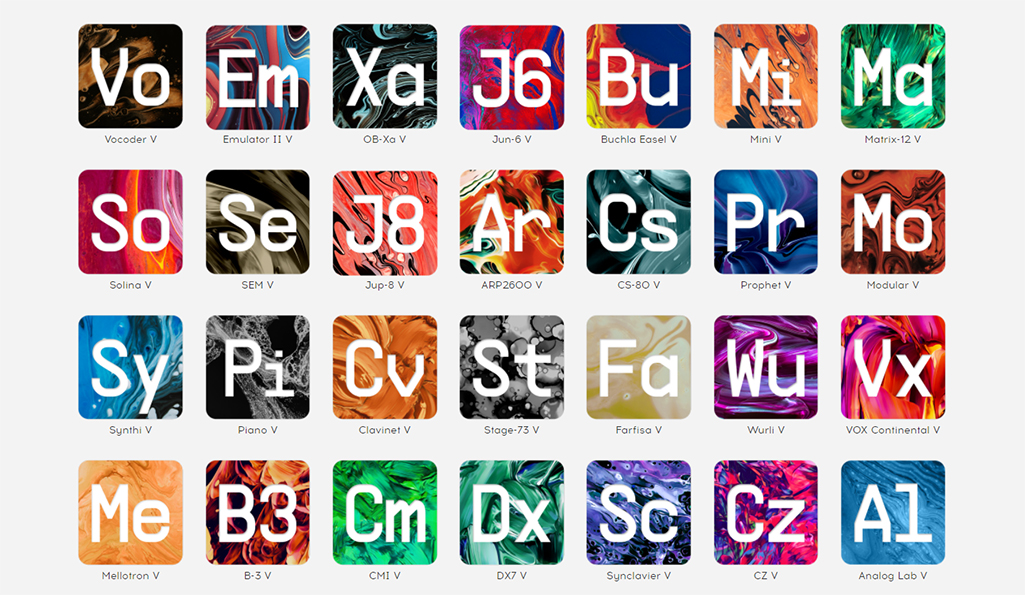 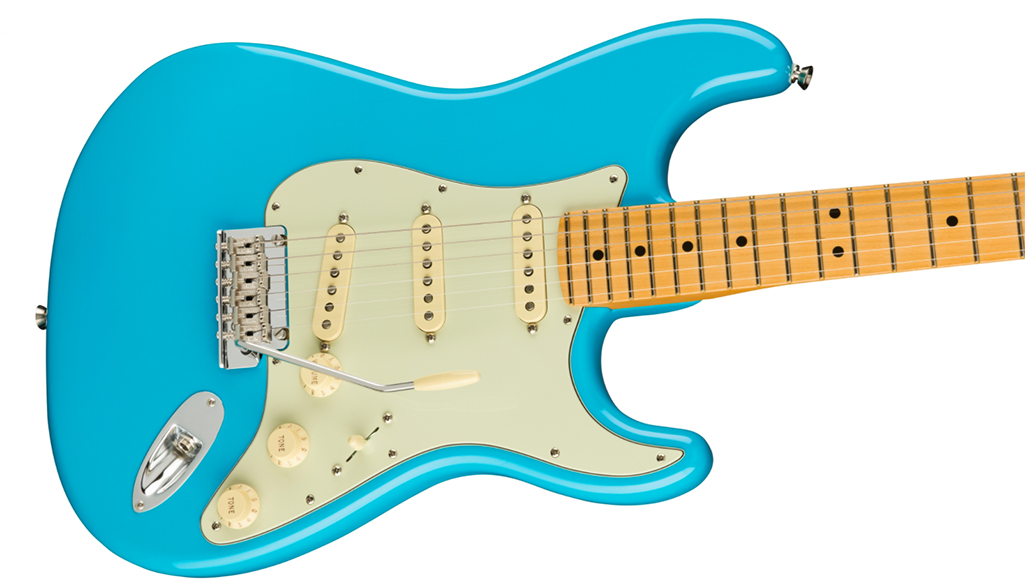