MusicPlayers.com had a chance to catch up with Mike Portnoy shortly after the band’s sound check for a March 11 performance in San Francisco, California.

MPc: Did the band get the name Dream Theater from a theater in Monterey, CA by the same name?

Mike: Yes. I used to visit my Dad in the summer and go there to see movies like "Rocky Horror Picture", "Clockwork Orange" and "Rock and Roll High School". That was back around 1980-81.

MPc: Has Dream Theater thought about trying to get their music into a movie soundtrack because the 2nd CD from Six Degrees seems like it was made for a movie?

Mike: Yeah, we've always been interested in that, but we've never had an offer. I think there is a big part of us that loves that ambient, improvisational stuff. We tapped into that a little bit with the Liquid Tension Experiment. LTE was full throttle technical music but the other half of that project was improve and space jams and stuff like that. Bits of Octavarium have that as well.

MPc: Do you consider yourself the leader of Dream Theater?

MPc: You write the set lists too?

Mike: Yeah, everything from the intro to the intermission to when the lights go on, when the videos go on… that comes from being a fan of other bands. I remember when I'd go see Rush or Metallica or whatever, I can remember my disappointment in terms of them playing the same sets over and over again. I like to make sure that in our music, that the fans won't hear the same sets when we play multiple gigs in the same city. I try to give the fans what I would want.

MPc: Do you keep track of what sets you've played at different cities?

Mike: Its great for the fans, but its torture at times. On my days off I'll sit in my hotel room writing the next three set lists and I'll have to look back and see what songs we played last time we were in that city. Whereas last night we were in L.A. and the night before Anaheim, which are an hour apart, close enough for people to drive to both shows, each of those shows were different... its a headache but its worth it to the fans.

MPc: With ever-changing set lists, how does the rest of the band and crew deal with it?

Mike: When we start the tour I list out all the songs that we might play during the tour and its everybody's job to stay on top of what's coming up. It’s everybody's responsibility to stay on top of the music and it’s a job. We have to utilize sound checks to rehearse new songs that we add to the sets. Like today, I had to tell those guys what’s coming and everybody has to be on top of what’s coming up on the upcoming shows.

Its a matter of having six hours of music at our finger tips and we utilize the sound checks to get that going. Same with our lighting director and video programmer, all that stuff has to be programmed. Jordan's keyboards have to be programmed. It’s a big job, everybody is on their toes at all times.

MPc: You’ve been doing three-hour shows without support acts for a while now. Any plans to change that?

Mike: I think this will be the last "evening with" tour we do for awhile. It’s a great format for the fans but it’s a lot and I think that on the next world tour we'll go back to the old way of carrying an opening act. We've done this format to death, We've done three world tours in this format.

MPc: How much sleep do you get when you do these back-to-back shows?

Mike: You get out of the show around midnight or one o'clock and go crawl into your bunk and by the time you get to bed it’s around two or three o'clock. When you wake up, if you've got no responsibilities you can sleep ‘till around one or two in the afternoon, but today I went to see my Dad and when I was in L.A. I had my family with me. You gotta’ pace yourself. I got up early today but tomorrow I have the day off in Salt Lake.

I prefer living in the tour bus. Before this stretch when we were doing Central America, South America and places like that and Asia… When you're staying in hotels from show to show... I hate that with a passion, that kills me (staying in hotels). Because you could have an hour flight from Monterrey Mexico to Mexico City, but that one hour flight is a five hour process of checking out of the hotel, getting on a bus, going to the airport, going through security and that whole thing takes five hours. And god forbid if you miss your connection. I would much rather be on the bus, get in my bunk, watch TV and then wake up in the next city.

MPc: Your kids join you on stage sometimes. How did that come about?

Mike: They love being on tour with me, I mean they just love it. They think that it’s normal. When they go to school, they think that everybody’s father is a rock star and they go off to work in the summer. They love it. They literally know the routine. They walk around with their laminates [badges].

MPc: How is it being a "Dad" while you’re on tour?

Mike: Do I worry about being a Dad? Nah, I'm not a great Dad (laughing). I mean, I let them do whatever the hell they want... we have fun. They've been doing it since they were born really. They were born into this. The other guys aren't the same; the other guys don't bring their kids around. I love having my kids around. I think you have to... there are so many marriages and families that don't work in the rock world because they stay separated, you know? There are so many marriages that break up and families that break up because, you know, the thought of going on tour for a year? I love my family (pause) but I love touring, doing what I do. The fact that I can incorporate the two together, the best of both worlds, I think that’s what makes it strong. My wife was a musician when I met her and she knew the whole routine and the whole world. She loved it.

MPc: Tell us about the concept of ending and starting your studio releases with the same Sound. Who came up with that idea?

Mike: When we were making Six Degrees it was an idea I had because there was a Van Halen album, Women and Children First, which ended with them starting a riff and then fading out and I was always thinking, “wow, when the next album comes out, sure enough its going to start with that ending riff”, but they never did it, they never took advantage of that. So I thought it was a cool idea to link together albums, and we started that with Six Degrees.

MPc: Talk about some of the concepts behind the new Octavarium CD.

Mike: Each song is written in ascending chromatic key. When the process started, I had an idea that I brought to the guys that this is our eighth studio album and I noted that we've put out five live albums in between. If you look at an octave (on a keyboard) you have eight notes leading from A to A, and the five black notes, the incidentals in between. So I looked at our album structure kind of the same way. I had this idea, why don't we, you know, this is our eighth studio album, an octave, we have five other live albums so here we are with thirteen steps, you know, just like an octave. I presented this idea; let’s write out the entire album based on the concept of a musical octave.

So we started writing the songs and we specifically delegated songs for a different key. We started with “Sacrifice Sons”, which was in E, then we started “Never Enough” which was in D, then we started building up “These Walls” in A and we started delegating different songs to different keys, and then we put these little sound effects in the album to go in between, so when you go from a F to a G, which is “The Root Of All Evil” to “The Answer Lies Within”, there is a little sound effect that connects those two songs which is in the key of F#.

Basically it was this grand concept that I brought to the band. Musically it’s an octave, production-wise it’s an octave in terms of those little sound effects and the segues, and lyrically, a lot of the lyrics like the title “The Root Of All Evil”, it’s the root of the octave. Octavarium is the octave of the octave. A lot of the lyrics are about intervals, which is part of the interval section of Octavarium. Even the artwork from Hugh Syme: the key signatures.

MPc: What was is like finally working with Hugh Syme, who has done so many Rush album covers?

Mike: He was great. He's done so many classic covers over the years. He's somebody that we've always wanted to work with. This seemed like a perfect album to begin a relationship with him.

MPc: How do you like using a ButtKicker since Dream Theater switched over to using in-ear monitors?

Mike: Yeah I use it, but the other night I threw my stool. I was really... lost my temper... threw my stool and I ended up breaking the thumper so we have to get a new one.

MPc: Speaking of thumping, what's up with the boxing robe you always wear after your sets?

Mike: I'm a boxing fanatic, but I must admit that I've fallen out of touch with it the last five to seven years. I used to love the sport passionately. My old drum tech Jose got it made for me with "Iron Mike Portnoy" on it. 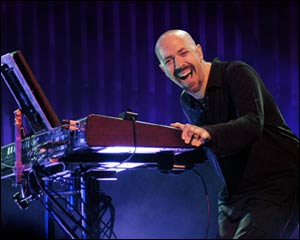 From the Studio to the Stage: Creative ...