GRAEFELFING, GERMANY: Having made musical waves during a show-stopping showcase of prototypes closer to home at SUPERBOOTH18 in Berlin, Germany, esteemed electronic musical device designer Doepfer is proud to globally announce availability of its A-111-4 Quad VCO, A-105-4 Quad Poly SSI VCF, A-132-8 Octal Poly VCA, A-141-4 Quad Poly VCADSR, and A-190-5 Polyphonic USB/Midi to CV/Gate Interface — a quirky quintet of polyphonic modules that sees the trailblazing company diving deeper into the now-industry-standard Eurorack small-format modular system standard that it initiated and popularised with its ever-expanding A-100 ANALOG MODULAR SYSTEM — as of March 1…

Who better to throw light on the thinking behind this quirky quintet than company CEO Dieter Doepfer himself. “Modular synthesizers are almost exclusively monophonic structures since true polyphonic patches require a lot of modules — at least four VCOs, four VCFs, four VCAs, and eight ADSRs for a ‘classic’ four-voice patch,” he begins. “But even then it’s difficult to control filter resonance or modulation depth of all the filters, for example, or the attack and decay time of all the envelope generators simultaneously. So now it's possible to integrate these functions into the modular synth world with our polyphonic modules, though the idea is not just to recreate a standard polyphonic synth within the modular system but rather realise new polyphonic structures that go far beyond a standard polyphonic synth and also far beyond the typical monophonic structures of a modular system since they still offer access to all parameters via CV or gate.” 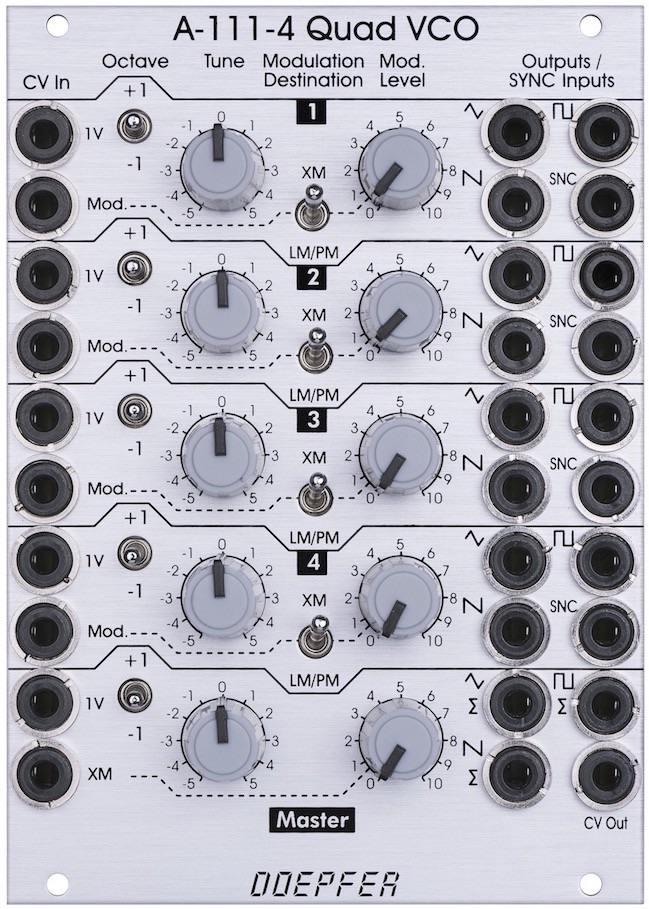 Perfectly named, the A-132-8 Octal Poly VCA module is an octal VCA (Voltage Controlled Amplifier), primarily primed for polyphonic applications. As such, it includes four pairs of VCAs — each pair including two daisy-chained VCAs, with one VCA having a linear control scale and the other a linear or exponential control scale, selectable via internal jumpers. Two VCAs are provided for each voice since one VCA is usually required for the loudness envelope and another for velocity (or other functions like individual voltage-controlled loudness of each voice, amplitude modulation, and so on). All VCAs are DC coupled and can be used in specialised applications and also for processing control voltages. The module features two Default Gain controls — GL and GX — that enable opening of the first four VCAs (L) and/or second four VCAs (X), with GL and GX generating two internal (0 - +10V) control voltages which are connected to the switching contacts of the 1L - 4L sockets (controlling GL) and 1X - 4X sockets (controlling GX). If no patch cable is inserted into the socket in question then the internal default (GL or GX) control voltage is used to control the corresponding VCA. This is necessary when the VCA in question is not in use — when no external control voltage is available, for instance, otherwise the VCA would close and there would be no output signal even if the other VCA in the chain is open. On the other hand, as soon as a patch cable is inserted into one of the CV Inputs then the corresponding internal default control voltage — CL or CX knob — is no longer used to control the VCA in question; rather an external control voltage patched to the CV Inputs now controls the level of the VCA in question. The GL and GX controls are also useful for testing polyphonic patches — tuning VCOs, for example.

Again, as implied by name, the A-141-4 Quad Poly VCADSR module is a quad voltage-controlled envelope generator — again, primarily primed for polyphonic applications. As such, it features four ADSR-type voltage-controlled envelope generators with exponential curve shapes (charge/discharge curves of a capacitor). Common manual controls and CVA, CVD, CVS, and CVR inputs with corresponding polarizers are available for the attack (A), decay (D), sustain (S), and release (R) parameters. All four envelope generators have a gate input (G1 - G4), a control LED, and an envelope output (Out1 - Out4). Applications include polyphonic patches, such as four envelope generators with the same envelope parameters to control four VCFs, VCAs, or other modules.

Last, but by no means least, by providing four voices with a 1V/octave-standard CV Note (pitch control voltage) to control VCOs and a Gate output (to control envelope generators), alongside two additional (CV2 and CV3) control voltages, the appropriately-named A-190-5 Polyphonic USB/Midi to CV/Gate Interface module does what it says on the tin. Those two additional control voltage outputs can be controlled by MIDI velocity, volume, modulation, pitch bend, aftertouch, or freely-assignable MIDI controllers. Multiple — four-voice monophonic (to control four monophonic voices by four successive MIDI channels); four-voice polyphonic (to control four monophonic voices by one MIDI channel) with several (rotating/non-rotating) sub-modes; two-voice polyphonic (to control two monophonic voices by one MIDI channel); and unison — modes are selected by switches with the result shown in the LCD. In play mode, for example, the LEDs of the first four switches display the gate states, while certain parameters of each mode can be edited. 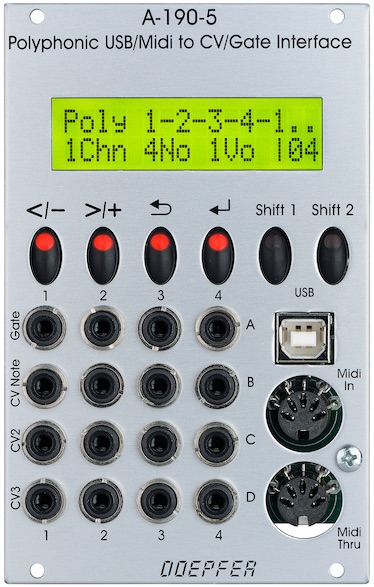 Ending on a high note, Dieter Doepfer deduces, “Modular synthesizers will still be predominantly used for monophonic sounds, as I’m well aware, but at least one polyphonic sound appears in many pieces of music and now it’s possible to integrate this into the modular synth world with our polyphonic modules.”

Outside of Germany, the A-111-4 Quad VCO, A-105-4 Quad Poly SSI VCF, A-132-8 Octal Poly VCA, A-141-4 Quad Poly VCADSR, and A-190-5 Polyphonic USB/Midi to CV/Gate Interface modules can only be ordered from Doepfer dealers in the territories listed here: https://docs.doepfer.eu/en/ (Note that residents in countries without representation can, however, order from Doepfer directly.)

Doepfer Musikelektronik CEO Dieter Doepfer began building electronic musical devices in 1979 with a voltage-controlled phaser module for the Formant modular synthesizer, a Moog modular system-style DIY kit documented as a series of articles in Elektor magazine; moving onwards and upwards, he then began developing devices under his own name, including the classic MAQ16/3 MIDI ANALOG SEQUENCER (in close collaboration with German techno-pop pioneers Kraftwerk), and subsequently spearheaded an analogue renaissance with the MS-404 MIDI ANALOG SYNTHESIZER in 1995: “It was such a big success, it opened the door to the A-100.We designed a lot of stuff for Kraftwerk, and they wanted everything in silver. So, when we started with the modular system, since we had such a strong relationship at that time with Kraftwerk, and everything was silver, we made it silver!” Kraftwerk’s Kling Klang studio that toured throughout 1998 laden with distinctive silver-grey Doepfer devices like the super-sized SCHALTWERK MIDI TRIGGER SEQUENCER and REGELWERK MIDI FADER CONTROLLER had a lot to answer for! Today, Doepfer’s diverse range of products — also available in black! — encompass USB/MIDI interfaces, master keyboards, sequencers, synthesizers, and more; musically, the Graefelfing-based German company counts such synth luminaries as Hollywood hotshot Hans Zimmer and stadium superstars Depeche Mode amongst its global user base. Better still, the A-100 ANALOG MODULAR SYSTEM remains the most compact, affordable, and flexible such system ever produced with over 125 of those still-silver-grey modules in the range... more are (always) on the cards, including more polyphonic modules. Meanwhile, the so-called Eurorack small-format modular system popularised by Doepfer has mushroomed to industry-standard status with hundreds of third-party manufacturers — both bigger and smaller — making compatible modules. 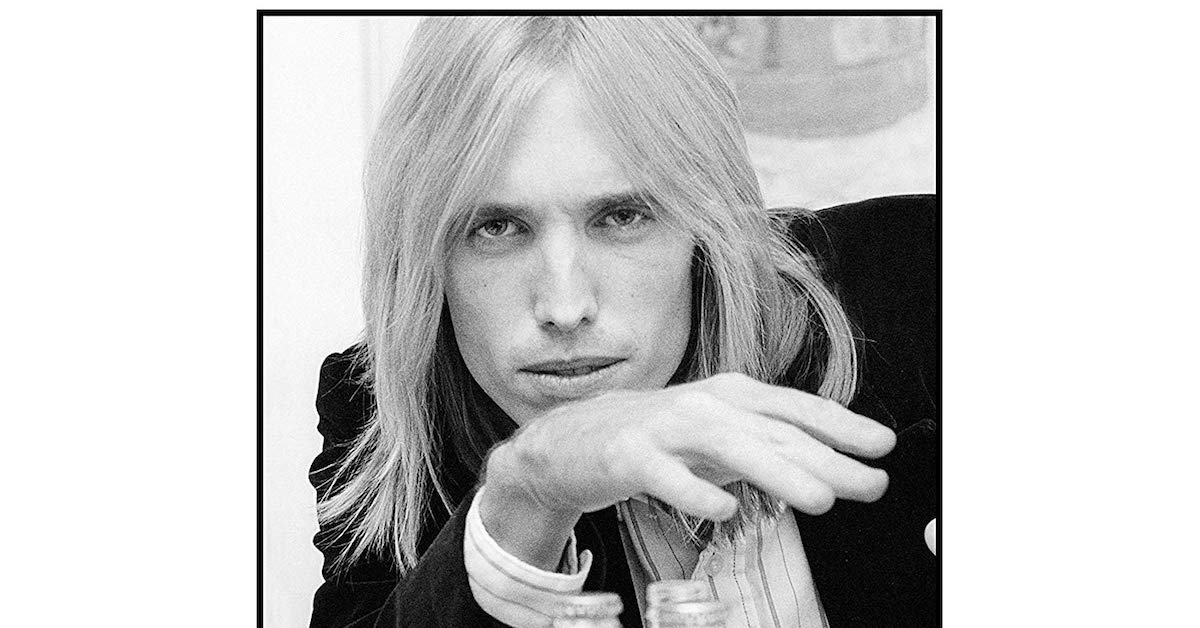 TOM PETTY AND THE HEARTBREAKERS’ THE BEST ...