A quick glance at the tantalising 12 VOICE POLYPHONIC BINAURAL ANALOG-HYBRID SYNTHESIZER WITH SUPER-WAVE TECHNOLOGY wording boldly blazoned across an eye-catching, classic design cue-capturing front panel — presenting a simple user interface and chunky controls combination clearly intended to be intuitive, expressive, and fun to play — plainly puts it out there for all to read, reinforcing that the SUPER 6 is a new take on the traditional analog synthesizer. State-of-the-art FPGA digital hardware oscillators are coupled with analog filters and amplifiers, while its unique super-wavetable core can be shaped and manipulated with the binaural analog signal path and flexible modulation. Perfectly paired with a fastidious focus on build quality and mechanical design duly benefitting from the ‘Midas touch’ of the one and only Axel Hartmann, responsible for shaping the look and feel of many modern musical instrument classics from the likes of Arturia, Moog, and, of course, Waldorf (where he started out as an in-house designer), the SUPER 6 both sounds and feels fantastic! 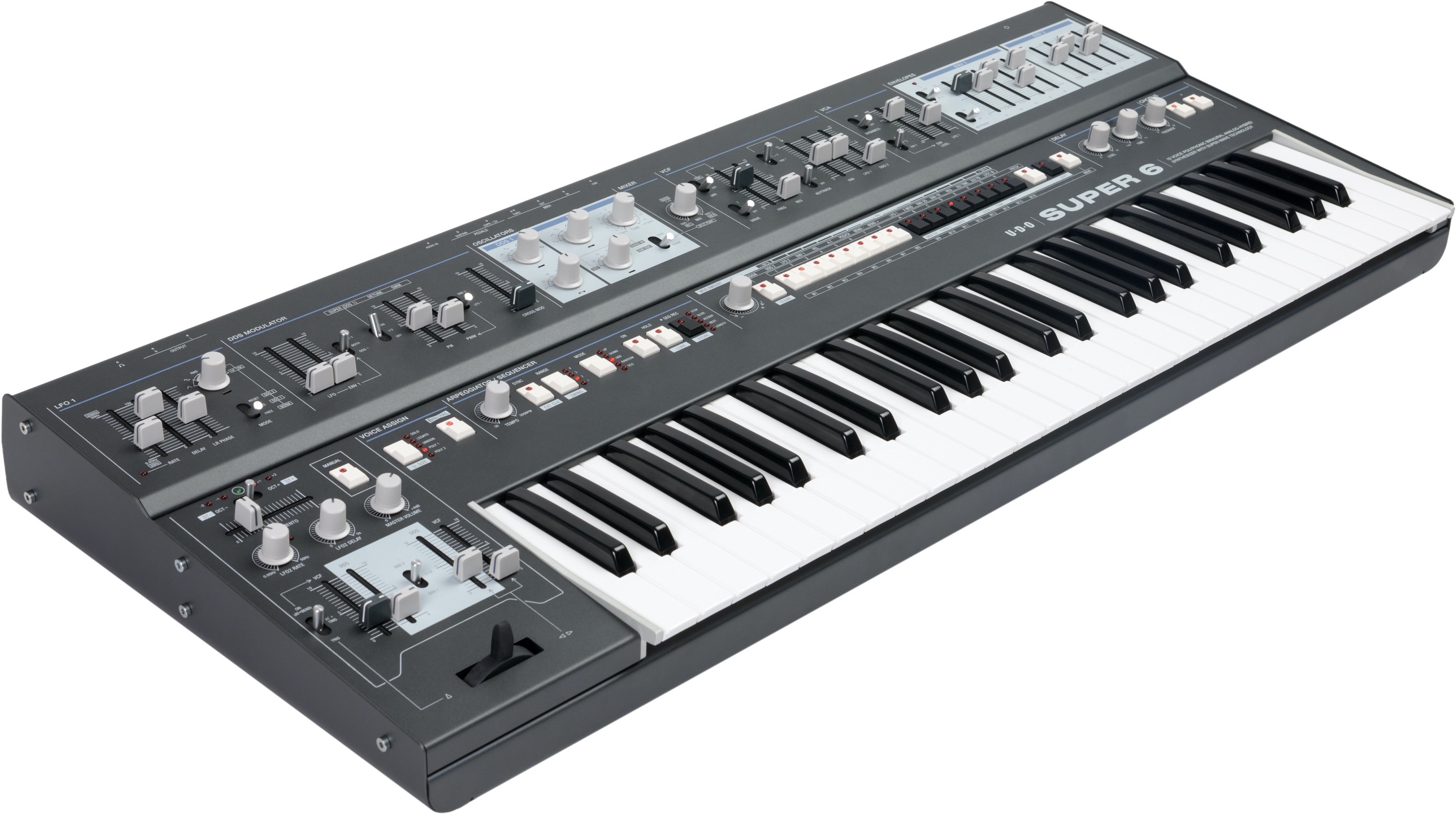 As implied by that tantalising wording, when in BINAURAL mode the SUPER 6 features a true stereo path in which its 12 voices are twinned to form six ‘Super’ voices — hence the appropriate appellation of the instrument itself. Its L (left) and R (right) OUTPUT channels — and also the listener’s ears, effectively — are assigned a complete synthesizer voice. So, starting with the stereo OSCILLATORS, parameters of both channels of each Super voice can be controlled independently, in turn allowing users to create stunning stereo images. Indeed, the effect on the sound ranges from subtle to extreme stereo movement and an enhanced sense of spatial positioning relative to conventional monaural signal chains panned at their output. Of course, BINAURAL mode can be disabled for 12-voice polyphony.

DDS (Direct Digital Synthesis) signal generation is employed by both oscillator cores. Though the SUPER 6’s OSCILLATORS are both capable of producing classic analog waveforms like sine, triangle, sawtooth, and square, DDS1 — the first oscillator — also features a selection of 16 waveforms that users can choose from. Furthermore, these 16 selectable waveforms are replaceable, allowing for a potentially unlimited sonic palette!

See and hear Jamiroquai keyboardist Matt Johnson — who has created two banks of presets — putting the SUPER 6 through its impressive musical paces here:

An analog voice architecture is applied elsewhere, with the SUPER 6’s main VCF (Voltage-Controlled Filter) being an analog 4-pole, 24 dB per octave, resonant low- pass affair using a classic — SSI2144 — polysynth filter design from Sound Semiconductor, a veteran team of musicians and enthusiasts with considerable experience in high-performance audio IC (integrated circuit) design. It is preceded in the signal chain by an analog voltage-controlled HPF (High-Pass Filter) that can either be OFF, FIX (fixed), or also TRK (track) the low-pass filter cut-off FREQ (frequency) for band-pass operation. An analog VCA (Voltage-Controlled Amplifier) section can further be used to shape the sound by adjusting and modulating the amplitude or loudness over time in time-honoured tradition.

The SUPER 6’s ENVELOPES can be routed to multiple destinations, including the DSS MODULATOR, the VCF, and the VCA. Each envelope features four ADSR (Attack, Decay, Sustain, and Release) stages, while ENV 1 also features a so-called H (Hold) stage, allowing users to delay when the attack stage starts after they have pressed a key, and LOOP mode. Mapping modulation routings using the modulation matrix provides users with an immediate approach, allowing them to route a modulation source to any modulatable parameter on the front panel.

The SUPER 6 furthermore features a flexible ARPEGGIATOR/SEQUENCER section with UP, DOWN, U&D (up and down), RANDOM, and SEQ (sequencer) MODE selection. Select SEQ and the SUPER 6 allows for the recording of up to 64 steps with programmable STEP, SLIDE, ACCENT, REST, and sequence LENGTH settings. Ultimately, users can STORE and LOAD up to 64 sequences in total. 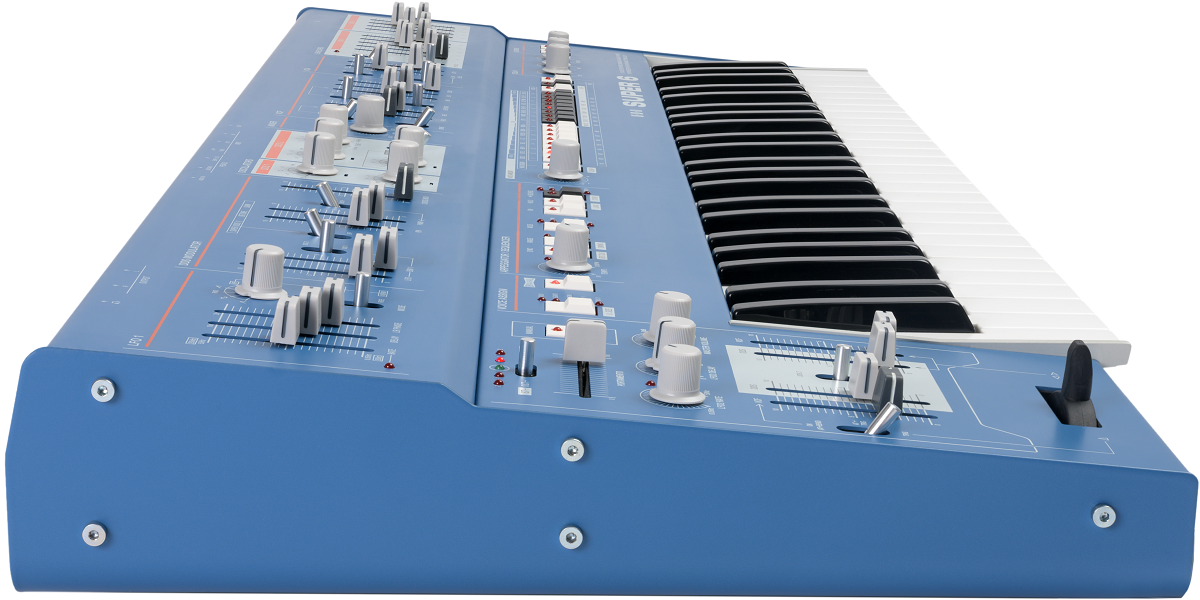 Two 24-bit effects are also available for adding the finishing touches to SUPER 6 sounds — namely, a stereo DELAY that can be modulated and synced to the ARPEGGIATOR/SEQUENCER or to an external clock, and a classic-style dual-mode stereo CHORUS, routed in series with the CHORUS coming first and the DELAY being last in the audio signal path.

Purposely designed without a screen, all of the SUPER 6’s primary controls and 128 (rewritable) patches are accessible directly from that eye-catching front panel. Prominently positioned, the VOICE ASSIGN function determines how the SUPER 6’s voices are used when a note is played, permitting users to choose between SOLO, LEGATO, UNISON, POLY 1, and POLY 2. It is incredibly intuitive and fun to play as a true performance instrument, thanks to a comprehensive performance control section — with assignable bender control, second LFO (Low Frequency Oscillator), PORTAMENTO, OCT- and OCT+ octave selector, transpose, and master fine tune — in addition to a responsive 49-key Fatar keyboard that is velocity sensitive and also responds to aftertouch. Additionally, the SUPER 6 can respond to incoming MIDI (Musical Instrument Digital Interface) messages sent by an MPE (MIDI Polyphonic Expression) controller via an individual MIDI channel per note.

Needless to say, SUPER 6 connectivity is similarly straightforward: AUDIO IN allows users to process an external audio signal through the synthesizer’s signal path and threshold-based envelope and LFO triggering; the main stereo OUTPUT for binaural synthesizer operation becomes mono if only one input is connected; connect the SUPER 6 to a computer via USB (Universal Serial Bus) using the included cable for bidirectional MIDI communication, patch and sequence management, firmware updates, and importing new waveforms; while the MIDI IN, OUT, and THRU ports, plus (sustain) PEDALS inputs and headphone output, are all self explanatory.

Enthusiast and technologist George Hearn, helming the team at UDO Audio responsible for bringing the SUPER 6 to life, is ideally positioned to enthusiastically sing its praises thus: “The result of years of hard work and many iterations of development, my mission with the SUPER 6 has been to harmonise what I love about archetypal electronic instrument design with modern, novel synthesis technologies that excel at generating spatially dynamic results. The architecture leverages the vibrancy of a true-stereo analog signal path, driving it with extremely high sample rate, spectrally versatile digital audio, and presents you with straightforward, expressive controls of superior mechanical build quality. I would love to see this instrument with the wear and tear of many years of use. Experiment, play, learn, and, hopefully, love it like we do!”

Pricing and Availability:
The SUPER 6 is available — in both black or blue colour configurations — at an RRP (Recommended Retail Price) of £2,295.00 GBP (including VAT) via Hand in Hand Distribution (https://www.handinhand.uk.net) in the UK and Alex4 Distribution (https://www.alex4.de) in Europe. Elsewhere, UDO Audio can currently be contacted directly for the USA: hello@udo-audio.com 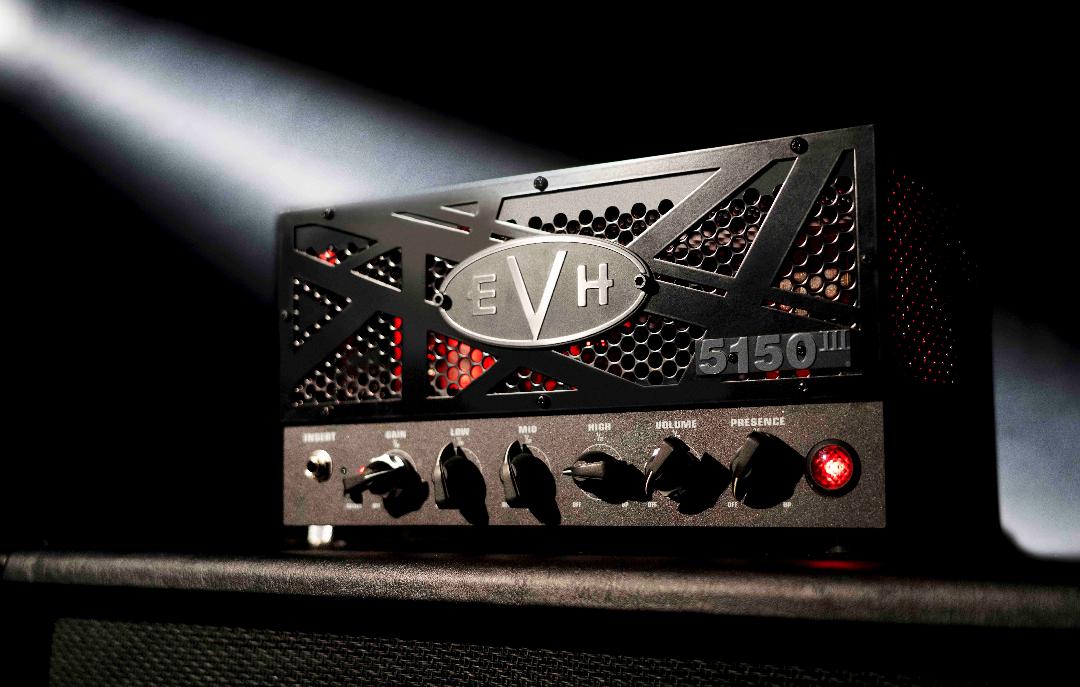 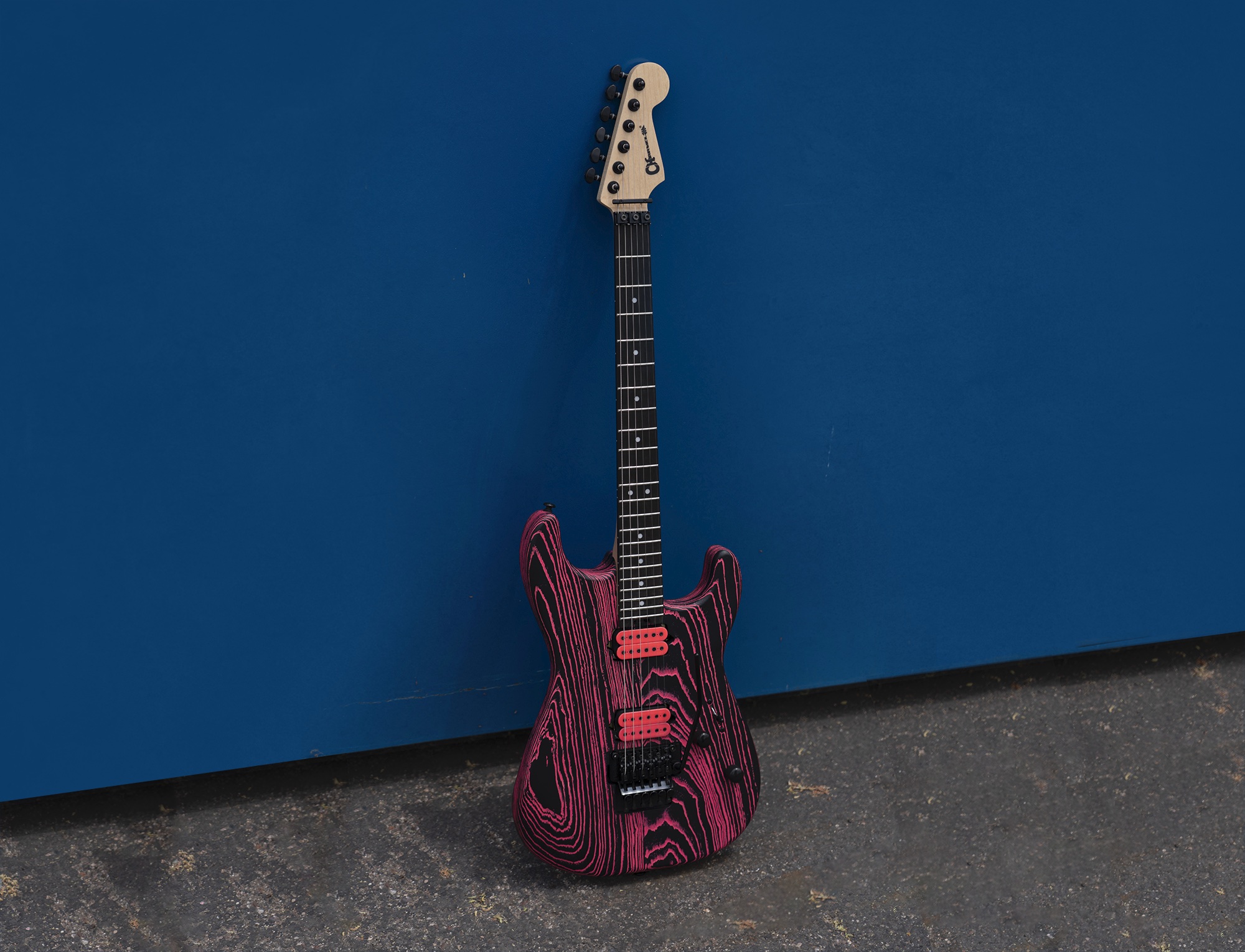