We recently reviewed Korg’s Wavestate hardware synthesizer (read that in-depth review here). Fully updating and expanding upon the classic 1990s Wavestation synth, the hardware Wavestate is capable of delivering unique and often fantastic sounds. However, most of our readers know that we really dislike abbreviated, 37-key keyboards on polyphonic synths, so the Wavestate synthesizer was just not a useful form factor for our studios or keyboard rigs.

We were thrilled, subsequently, when Korg surprised us with the release of the Wavestate Native, a software plug-in version of this incredible sounding hardware synth. Armed with the controller of our choice, an 88-key Arturia Keylab 88 mk2, we couldn’t wait to dig back into this fabulous instrument.

The Wavestate Native features essentially the same sonic architecture as the hardware, so we won’t go into all of the details (they are covered in the hardware review). You still have 64 stereo voices, gigabytes of sample library space, “Wave Sequencing 2.0” which separates the timing, sequencing of samples, and the melody, so that each can be manipulated independently. Additionally, other characteristics that can be manipulated include shapes, gate times, and step sequencer values. Each of these forms a “Lane,” and each Lane can have a different number of steps along with its own start, end, and loop points. Wavestate really takes wave sequencing to another level.

One interesting fact is that the software and hardware versions are sonically interchangeable, so a sound created on one platform is able to be imported into the other. This is accomplished via additional software: the Wavestate Sound Editor and Librarian. This software allows for not only transferring sounds between platforms, but also allows you to edit and organize your presets. And, like the hardware, you can import your own samples for even greater sonic flexibility.

In our original article, we mentioned the presets “Video Games” and “2600 in the Matrix.”  While we no longer have the hardware version in our possession, we couldn’t A/B the two sound sources directly, however the sound sets seemed to be very close, if not identical. 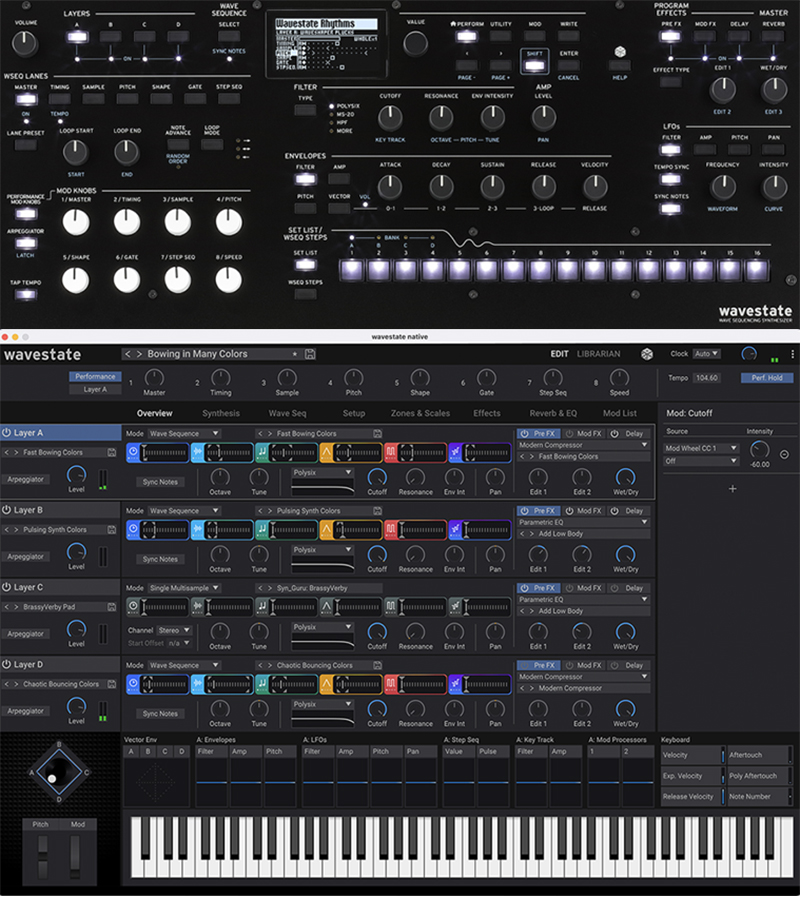 Korg took advantage of added computer screen real estate to expand the user interface in Wavestate Native. You can see the hardware synth's controls above, followed by the Wavestate Native software.

For us, however, the biggest difference wasn’t the sound (though at times we recall the hardware sounding slightly thicker than the software version), but rather the workflow. On the hardware, you lack a full-sized keyboard but have many hands-on controls to adjust sound, plus the all important joystick modulator. Arguably, this is one of the cornerstones of wave synthesis: to adjust the balance across wave sequences in real time with wonderful results. While the software gives you the ability to use any size keyboard of your choice, your tactile control is now governed by your controller of choice. The GUI of the Wavestate Native has a top row of eight knobs which can be MIDI “learned” (assignable by right clicking, which worked great with the eight knobs on our Keylab), but it isn’t the same as having EVERYTHING there on the top panel at once. Sure, you can visually see everything better on the computer, and there’s massive flexibility, too, but you will need a mouse to get to everything. Is this a deal breaker? For players in need of the joystick, maybe (unless they get an appropriate controller). For most of the rest, though, it’s no different than any other hardware-vs-software choice.

Some players may say, “Get the hardware, then pay an extra $50 for the software version” as the cost is only $50 if you own the hardware first, and then you can control the Wavestate software using the hardware as a controller (once you map your favorite controls in the software to hardware controls). There’s no direct 1:1 mapping of controls as the software interface is slightly different from the hardware. But, the voice architecture is the same, and you can easily copy sounds that you develop between the hardware and the plug-in.

One small advantage of the software that we want to point out is the ability to play something using the plug-in and automatically capture audio and MIDI directly into your DAW. To do this with hardware, you would need to pass audio from the output of the hardware through some other audio interface to record it into your computer.

Wavestate Native is available in VST3, AAX, and standalone formats on both macOS and Windows, as well as AU on macOS. On its own, it costs $199.00 from Korg directly. However, if you own a hardware Wavestate, you can purchase the software as a “crossgrade” for just $50. For unique sounds with seemingly endless possibilities, you can’t go wrong with either the hardware or software versions of the Wavestate synth. But how you like to work with your synths may be the real determining factor between which version of the Wavestate is better for you. In the meantime, we have our eyes on a Korg nanoPAD2 to see how well its X-Y pad works to control the Wavstate’s virtual joystick, because just like other classics in Korg’s Legacy synth collection, the company does a fantastic job porting their hardware to the virtual world.