MXL has been making microphones for over 20 years now and recently has been gaining notoriety for their high-quality sound, solid construction, and affordable pricing. We love the previously reviewed, Revelation Solo, tube microphone (and use it quite regularly now), so when MXL CEO, Leonard Marshall, spoke with us about other mics in the family during the 2015 Winter NAMM show, we expressed interest in seeing how the solid-state side of things stacked up for the studio.

Enter the CR89, a delightful studio condenser microphone. From vocals to instruments, this workhorse of a mic can see a lot of use as one of your workhorse tools. It delivers excellent sound, rugged construction, and pricing that won’t break the bank when you decide that you’d really like to have a pair of them for additional use on drum kits or recording other sources in stereo. We’re certainly planning on adding this one to our mic locker.

The MXL CR89 is a large diaphragm (32 mm capsule) condenser mic, “big and meaty” according to one reviewer here (1.85 pounds and measuring approximately 2.5 inches around by 7.25 inches tall). Its black color with metallic accents makes it a sharp looking addition to any studio.

Sporting a cardioid pattern with a 20Hz—20kHz frequency response, it also has a signal/noise ratio of 80dB, a maximum SPL of 138dB and 124dB dynamic range. The mic requires 48V phantom power for operation.

The mic does not have an input pad nor a high-pass filter—omissions that presumably enable this otherwise high-quality microphone to have such an affordable price. But on the positive side, it’s completely plug-and-play. Besides, you’re probably going to plug it into a nice preamp that offers these controls.

The mic comes bundled with an aluminum briefcase, shock mount, and microfiber cleaning cloth. For all the nice details of design, packaging, and cleaning cloth, we were surprised that the mic doesn’t include a slipcover to place over the mic while attached to the mic stand.

Well… it’s a mic. Not that hard to use or set up! Well… that is, once you figure out how to cradle the mic in the shock mount. It’s pretty standard stuff for studio folks, but for those of you who are new to studio mics, first attach the top elastic band to the shock mount, then place the mic on top and stretch to connect the four contact points. You may need a friend to assist with the bottom band, which connects in the same manner.

Since this is a cardioid mic, sound is best picked up from sources placed in front of the mic, with reduced sensitivity to the sides and even less in the back. The sturdy, included shock mount worked well. We definitely suggest attaching it to a sturdy, studio mic stand, though, as the weight of the mic can easily tip over a light-weight stage stand.

Our one note of caution with this mic: because there are no switches for filters or polar patterns on the housing, and the capsule is exposed on all sides, the only way to ascertain the front of the microphone is by looking for the CR89 logo design (see photo at the start of this review). MXL® appears on the opposite side of the mic, which is, in fact, the rear. Our first instrument tests were extremely lackluster until it occurred to us that perhaps we were capturing sound from the rear of the mic capsule. Sure enough, resolving this easy-to-make gaffe instantly resolved the issue and restored our faith in MXL.

We really liked the sound of the MXL CR89. Our first use of the CR89 was to try it out on some male r&b/pop vocals through a Focusrite Octopre preamp, and we were immediately impressed. There was a nice presence and warmth to the vocals without any appreciable colorization. There was an intimacy to the vocals that we also found very appealing, and great clarity without any plosives compromising the vocals. MXL states there is minimal proximity effect with this microphone, and we also found this to be true when we had our singer “work” the mic.

Next, we put the MXL CR89 to use recording acoustic guitar. For testing purposes, we tracked a Taylor 614ce acoustic guitar through the MXL CR89 into an ADL 600 preamp. We positioned the CR89 just a few feet in front of the guitar, aimed just off center from the sound hole, listened for a good general position, and began recording.

Overall, the CR89 exhibited a very neutral response, reproducing our Taylor acoustic guitar’s rich lower registers and clear top end faithfully. It was sensitive enough to capture the complete dynamic range of our performance, and it never got “boomy” when loud strums were interspersed with more delicate picking.

Just for kicks, we tried the mic on an old, acoustic-electric Ovation guitar through the Focusrite preamp. The results were interesting, as the CR89 essentially worked too well. Our Ovation is, frankly, not a high-end model, and the MXL captured it in all of its glorious imperfections! Buzzy strings, not a great high end, plastic... Ah, yes. All the finest qualities of that guitar immortalized in Pro Tools. We’ll stick with the Taylor.

Given the high SPL rating of the mic, we even tried recording a Fender Stratocaster through a Marshall tube amp from a few feet back. While condensers aren’t our typical go-to mics for rock guitar, we were nonetheless impressed with the results, capturing surprisingly warm tones with plenty of presence. In fact, we like the sound so much we just might have to use this mic as part of our electric guitar “secret sauce” when it’s time to track something with a classic rock vibe.

Finally, we put the mic to task tracking some tambourine. The CR89 did a great job faithfully preserving the sparkle of our rhythm device and also capturing sound down to the quietest rattles as the tambourine tone decayed. 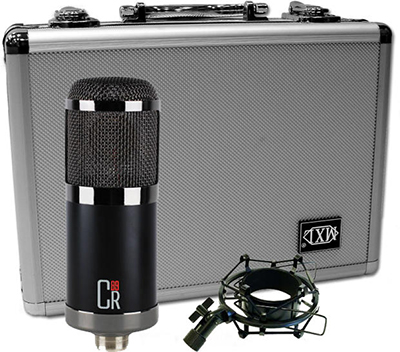 Well... it’s a mic! There’s not much to really explain. Nevertheless, it does come with a paper pamphlet that contains tech specs and a few suggestions related to phantom power and use of good cables. It would be nice if instructions were provided for mounting the mic in the shock mount, not to mention some tips for effective use in common studio situations.

The MXL CR89 (MSRP $469.95) sells for approximately $350. This is a very good price for a pro quality, studio condenser mic that includes a shock mount and hard case. It easily competes with mics costing two to three times its price.