WESTLAKE VILLAGE, CA, USA: Literally following in the footsteps of its first foray into the Eurorack small-format modular market with its Magneto Four Head dTape Echo & Looper module, shipping soon after a successful showcase at The 2018 NAMM Show in Anaheim, CA, powerful processing effects developer Strymon is proud to announce its Volante Magnetic Echo Machine followup — focusing its innovative design on radically enhancing the sonic expressiveness of pedalboards as a stereo multi-head delay that also offers a looper and vintage spring reverb, with powerful sound-sculpting controls for limitless sonic possibilities — as of January 14…

As implied by the Magnetic Echo Machine legend boldly blazoned across an attractive, rugged, road-ready, yet functional front facia that should feel familiar to owners of Strymon’s similar-sized effect pedals such as the award-winning BigSky (multidimensional reverb) or TimeLine (multidimensional delay) — or, for that matter, its inspirational Magneto Four Head dTape Echo & Looper module with which it shares some controls and design DNA, Volante features magnetic drum, tape, and (reel-to-reel) studio echo as a stereo multi-head delay that also offers a looper and vintage reverb. Reality dictated that Strymon relentlessly studied and faithfully recreated every last magnetic delay system attribute to capture the nuance and complexity of classic tape and drum echo machines — from sought-after natural saturation and soft clipping of magnetic media when driven hard to hands-on, real-time controls for MECHANICS, WEAR, SPACING, and LOW CUT, Volante instantly adds tons of vibe to any user’s sound. 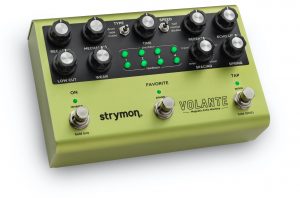 Situated at the center of  Volante’s control surface are four delay playback heads with individual playback and feedback controls — each head’s playback level can be set for full volume, half volume, or off, and each head can be switched in or out of the feedback circuit. Creatively, users can even switch heads into the feedback circuit that are not activated for playback, putting the creation of complex rhythmic patterns, as well as reverb-like atmospheric textures, at anyone’s fingertips.

Fortunately for fearless users, Volante not only delivers the warm, luscious delay signals that magnetic tape machines are known for, it is also capable of a high degree of saturation — simply turn up the REC LEVEL knob to increase the gain of Volante’s analog class-A JFET input preamp circuit, sending a hot signal with analog warmth to the record head for facilitating any amount of saturation.

Some classic tape echo machines included small integrated spring reverb tanks tuned to limited bandwidth. Strymon skilfully captured this vintage vibe for Volante by creating a spring reverb with a gorgeous, gentle character that stands up to scrutiny on its own while also enhancing delayed signals.

Some vintage multi-head tape echo machines’ heads were not evenly spaced, which created interesting sonic interactions when multiple heads were set to repeat. Volante far from disappoints on that score; spacing is continuously variable for the entire travel of the SPACING knob, morphing between the available even, triplet, golden, and silver settings — the latter two ratios respectively realising dense, non-overlapping echoes and non-overlapping echoes biased toward the quarter note.

Needless to say, Volante also allows users to set the pan of each head individually for spacious, multi-head stereo delays. By default, all heads are panned center, with Volante still creating a pleasing psychoacoustic stereo image. 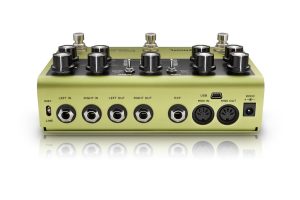 Imaging notwithstanding, Volante really sings when pushed to extremes! All the richly evolving, super-spacey sonic textures imaginable are available by turning up its REPEATS knob. Intuitive and responsive hands-on control for sculpting the feedback is also at hand.

Handily, Volante’s SPEED switch selects the speed of the recording media, allowing users to run any of its three magnetic echo machines at half, normal, or double speed; fidelity is higher at higher speeds, while lower speeds result in warmer repeats and more pronounced effects from mechanical and media irregularities introduced when turning up the MECHANICS knob.

By being designed from the ground up to radically enhance the sonic expressiveness of pedalboards, performance is clearly central to Volante’s raison d’être. Delayed psychedelic feedback sounds can be unleashed on command when working in Echo mode by pressing and holding the ON footswitch to activateInfinite Repeats; regardless of the current REPEATS setting, Volante will crank up echo regenerations for quick-building delay feedback — foot off of the switch results in Volante returning to the previous setting.

Speaking of performance, Volante can create dynamic loops that degrade and evolve. Change direction at the touch of a (reverse) footswitch. Press pause for a mechanical tape stop effect. Change the speed of the loop and simultaneously change the pitch in octave increments. Find an inspiring sound in Echomode, and all echoes remain intact when engaging SOS (Sound On Sound). Once the loop has reached a perfect state of mutation, engage Infinite Repeats to stop further degradation, creating an infinite loop while disengaging the loop record head. While in Sound On Sound mode, pressing the ON footswitch results in the entire loop playing in reverse; users can continue recording new audio to layer with the reversed audio.

Armed with full MIDI control of every parameter, plus 300 preset locations, Volante is designed to be the center of sonic expressiveness for MIDI pedalboards. Put it this way: Volante transmits and receives MIDI over 5-pin DIN, USB, and even its EXP (expression) jack. Connecting an expression pedal opens up a whole new level of instantaneous, constant control; set as many knobs as desired for the heel and toe positions of the connected expression pedal and all settings simultaneously morph through the expression pedal’s full range. Remaining, briefly, outside of Volante itself, connecting Strymon’s simultaneously-announcedMultiSwitch Plus accessory to Volante’s EXP jack adds additional footswitchable control; select between three presets, remote control of the SPEED switch, remote transport control, or further foot control while in Sound On Sound mode. 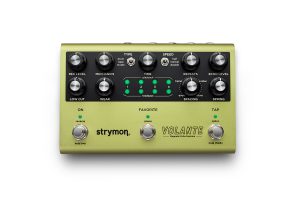 Continuing connectivity advancement, a dedicated INST (instrument)/LINE input level switch ensures that Volante can comfortably work with a variety of input sources — switch to INS when using a guitar level input, LINE when using Volante in the effects loop of a guitar amp or driving it with a hot output from a synth or mixer insert. Indeed, the LINE input is also perfect for using Volante as a send effect or insert effect in the studio.

Seriously flexible, then, the pedalboard sonic expressiveness-enhancing Volante really rewards experimentation, yielding rich, hypnotic, and often unpredictable results — albeit always highly musical. Making room for one (or more) in a pedalboard or studio setup surely sounds like a perfect plan!

Strymon is already accepting pre-orders for Volante via the Strymon Store (https://store.strymon.net/volante/) to American Samoa, Canada, Puerto Rico, United States, and United States Minor Outlying Islands for $399.00 USD (plus tax and shipping) or through its growing global network of authorized dealers (https://www.strymon.net/dealers/).

Damage Control was founded in 2004 with the release of its line of tube-driven effects pedals, which earned critical acclaim and became firm favourites among guitarists across the globe. Product development under the Strymon name began in 2009, and the rest, as they say, is history... building products with no compromises; pushing the limits of what is possible with music gear; using exceptionally great components and ridiculously powerful processors; making gear that sounds better than anything; making its customers happy; inspiring them to create amazing music. 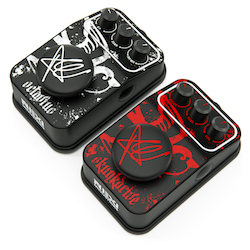