Whoever said that metal bands fronted by women don’t rock have clearly been living under a rock. It’s a shame too, since from down there, they won’t be able to hear Tales of Fire and Ice, the latest album from heavy metal band, Crystal Viper. Then again, from how hard this record shreds, they might not have a choice.​

Representing Poland’s metal scene since their start in 2003, Crystal Viper has had several personnel changes. The lineup present on their latest album is composed of guitarists Andy Wave and newcomer Eric Juris, bassist Blaze J. Grygiel, drummer Tomasz "Golem" Dańczak (who has since departed the band), and of course lead vocalist, rhythm guitarist, and composer, Marta Gabriel.

The musicianship on Tales of Fire and Ice is a superb combination of speed and melodic metal, and all of its components are executed and blended flawlessly. Gabriel delivers piercing vocals with impressive flexibility and works perfectly along with the thundering rhythms from drummer Golem, a well-paced bass groove from Grygiel, and of course a dual guitar assault from Wave and Juris. The organ, synth and piano work also add to the album’s chilling vibe (more on that below). Some of the more exceptional tracks that capture the incredible skill of these musicians include the rip-roaring “Crystal Sphere,” the slower yet triumphant “Neverending Fire,” and the anthemic “Tomorrow Never Comes (Dytalov Pass),” which is perhaps your humble reviewer’s favorite track off the album. Crystal Viper also deliver a fantastic rendition of Dokken’s “Dream Warriors” as a bonus track.

While the musicianship on Tales of Fire and Ice is fantastic, the highlight of this stellar album has to be its vibe. The dark, chilling, somewhat edgy, and eerily mythical atmosphere the album gives off really merits adding it to your music library or driving soundtrack. It warrants multiple listens and is completely satisfying. The track layout is also worth noting: from the chilling introduction at the start and mid-album interlude, practically every song that follows gets you hyped for the next one. We also can’t overlook the record’s solid production quality either. Each song is crystal clear (no pun intended) and mixed exceptionally well, allowing the pre-mentioned atmosphere to be felt at full force. Almost nothing stops this album from hitting you!

Overall, Tales of Fire and Ice is another fresh release that will certainly keep the melodic speed and heavy metal genre thriving, particularly in the European music scene. In case we haven’t mentioned it before in our reviews of phenomenal overseas acts, Crystal Viper is one of many groups that we REALLY wish was bigger here in the U.S. Digression aside, Tales of Fire and Ice is an exceptional metal album, and its chilling vibe and powerful musicianship is sure to keep the listener's heads banging and fists raised. The Crystal Viper strikes again! 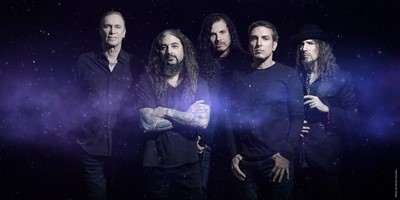 SONS OF APOLLO LAUNCH VIDEO FOR ...