The WT400 was Eden’s number one selling amp for years and there is a good reason for that. Its “big bang” small-box construction and clear-cut controls made it very user-friendly. There is nothing more appealing than a product that requires minimal tweaking to get a good solid tone.

While Eden released the WT550 as a direct replacement, the WT400S is the same amp with slightly less power, but still plenty of juice to cover club gigs and smaller. This amp will appeal to the working professional who needs a versatile amp suited to varying styles, but who doesn’t need massive power and wants portability, reliability, and great, solid, bass tone.

The clean interface of the WT400S is simple enough for even a novice to operate. Eden definitely has their collective finger on the pulse of great bass tone and have continued the great tradition of the WT400 with all subsequent models they have released.

This amp is a re-issue of the old standby WT400, constructed of all original parts, and only twenty-five were actually manufactured. Each one comes with a certificate of authenticity hand-signed by David Eden. It has a tube pre-amp which is driven by an Eden 7025, but can be replaced with a 12ax7 if need be (with no adverse effects). The WT400s is rated 400 watts at four ohms, and 235 watts at eight ohms. It comes with detachable rack ears, and the front panel layout is identical to the Eden WT550 that replaced this amp.

The gain control is a push-pull knob with a -12db pad, extremely handy for basses with high output pre-amps. Used in conjunction with the Level Set Indicator light, you can set your gain to an optimal level before setting the amp’s master level. The “Magic Knob” on this head is the Enhance control which effectively boosts very low bass, upper middle, and high frequencies while cutting lower mid frequencies. Set to its minimum level it is essentially flat.

When pulled out (another push-pull knob), the Enhance knob also functions as the compressor bypass. A compressor indicator light indicates when compression is, in fact, taking place.

The tone control section features a Bass knob, semi-parametric tone control, Frequency control, Boost/Cut controls, Treble control, and an EQ clip indicator. The Bass and Treble knobs are shelving type set at 30 HZ and 2 KHZ respectively. Semi-parametric EQ allows the user to cut or boost the frequencies set with the frequency control by plus or minus 15 dB. Boost Cut controls are flat at the center position. The EQ Clip light indicates clipping of the tone control circuit – something to be avoided to prevent speaker damage.

Output Limit indicators are another useful feature showing you when the power amplifier section limiters are kicking in thus protecting your speaker system from damage. This LED indicates that the maximum output of the amp has been reached.

Rounding out the front panel features is the Headphone output which is handy for quiet late night practice.

Rear panel features include Amp Out, which is really a speaker output, Effects Send/Return (the loop is implemented after the compressor and Enhance knob, but prior to the tone control section). Recording or DI Out is post-EQ/pre-master and works in conjunction with the DI Level control. AUX In Right/Left are designed to accept any input including a studio cue signal for your own headphone mix in the studio if desired. Be aware that these inputs are post tone controls, pre-master.

The Tuner Out has dual use as a post-tube, pre-gain and pre-EQ send, as well as its typical use as a send to your tuning device.

Like all Eden amplifiers, this amp is equipped with a thermostatically controlled fan that kicks on after the amp reaches 130 degrees Fahrenheit. It also features a thermal protection circuit that will shut the amp off at 200 degrees, but it will still allow the DI to function – a very useful feature in the event of an emergency.

We found the WT400s to be very plug-and-play, with very little fluff to confuse the issue (which is good). All controls delivered and functioned as expected. This head delivers plenty of volume for most moderate volume situations as long as it’s run at four ohms. However, be aware that your moderate and our moderate may be distinctly different. A loud rock band with Marshall stacks will of course need something more powerful from the bass amplification end of things, but the WT400s was not designed for that application. It barely weighs in at only sixteen pounds and (without its rack ears) is compact enough to stick in a duffel bag or the Eden carry bag which will easily fit on the front seat of your car.

Of note was the thermostatically controlled fan that kicked on when the amp started to get hot after about fifteen minutes of operation at fairly high volume, but shut off soon after the amp cooled. We loved this great feature.

We started our evaluation by using the Highway One bass into the WT400s paired with the 4 Ohm D410XLT 4 Ohm Cab (we wanted to start with a simple passive bass and “old standby” P-bass). Leaving the Gain knob pushed in (due to the passive pickups in use), we set the gain by turning it up until the Level Set Indicator light came on and then backing it down slightly until it only came on with our hardest hits. We then brought up the master level to 9:00 to listen to how our gain setting sounded through the master output.

The tone the WT400s produced with these settings was mostly flat but had a heavy emphasis on low mid frequencies (which we didn’t care for). However, when we engaged Eden’s “Magic Knob” Enhance control at 50%, the difference in sound was astounding! A very clear tone emerged that was useful for any style of music or technique. This was with all settings flat on the EQ controls.

The EQ section was just icing on the cake from that point on, and all EQ gain knobs were very sensitive to the slightest boost. We love it when you can hear an adjustment to the dials make a difference between 1:00 and 3:00.

The sound results were the same for each bass that was plugged into the WT400s. Active instruments definitely need to have the -12db pad engaged to avoid clipping the preamp section, but it works like a charm producing the same great tone that the passive bass did.

After testing the WT400s with four-ohm cabinets, we then moved over to an eight-ohm cabinet which, because of the amp’s power rating, produced much less volume. Every bass amp has what we call “A Home,” and this amp lives at four ohms. For a quiet situation, the eight ohms configuration should work, but four ohms is the preferred pairing for this amp and will cover most club gigs.

With finger-style playing, it was very easy to dial in a usable bass tone for any style of music. Pick playing yielded a more aggressive tone suited to simple rock playing and great pick muted grooves. Overall, we felt the WT400s lacked the grind needed for heavy rock playing but more than made up for it with the Enhance knob’s ability to cut low mids and bring clarity to our tone, something that is sorely lacking in many similar amps.

The Operations Manual was well thought out and provided great insight into the controls as well as some hands-on suggestions that will be very helpful to the novice user.

The WT400s ($1,469 MSRP) has a typical street price of $1,028. This is a very fair price to pay for a piece of bass history and your last chance to get this great amplifier since the reissue was such a limited production run. 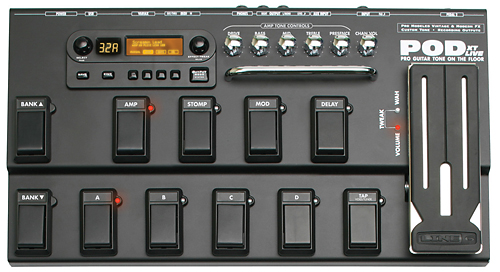 Michael Amico has played and taught bass professionally for twenty-five years, and is currently writing his first instructional book. He can be reached at mike@basscentral.com.