Is Use of Your Wireless Gear now Illegal?

The house lights go down and your band takes the stage. It's exciting stuff — you're playing to a capacity crowd, opening up for a touring headliner at the largest concert hall in your home city. The drummer and bassist lay down a wicked groove and the crowd starts to respond immediately. You flip your amp out of standby and get ready to hit that first power chord. But out of your guitar amp comes a high pitched voice squealing, "Oh my god, Britney. That singer is so cute!" Meanwhile, you've got no tone whatsoever. "Oh my god. My wireless system has been hijacked by the audience!"

While dramatic, thankfully this isn’t what would actually happen. However, interference from new wireless devices will cause wireless signal “dropouts,” which are brief (and usually silent) gaps in signal. You might hear some noise or hiss, but you won’t hear what the interfering product is transmitting — which is probably going to be data rather than voice.

Fortunately, recent legislation by the FCC prevents this type of interference-related disaster from happening. However, if you're one of the thousands of gigging musicians in the United States using a wireless system — either for your vocals or your instruments, new changes to the law may have actually made it illegal to use your wireless equipment!

As of June 12, 2010 any wireless microphone equipment that uses frequencies between 698 MHz and 806 MHz is prohibited in the United States.

To the astonishment of the entertainment and sports industries, the US government (the FCC in particular) took sides with lobbyists for big businesses like Verizon and Google, forcing everyone from indie bands to Broadway theaters to houses of worship to pro sports teams to replace much of their existing wireless equipment so that the frequencies this gear used to use could be made available for new services that have nothing to do with the current use of this airspace.

If this was the FCC's attempt at stimulating the economy through forced retail sales, it's a miserable attempt since for many of us, wireless systems are merely a luxury and not a requirement. Many young bands with limited budgets may have to scrap their existing wireless gear and go back to using cables. The horror!

So just what wireless systems are affected by the new laws? All equipment operating in the 700 MHz frequency space!

The 700 MHz range consists of any frequency between 698 and 806 MHz. Before the USA's 2009 switch to digital television, certain frequencies in this range were used for analog television channels, and others were available for use by wireless systems like your music gear. Prior to January 2010, all wireless systems – including those in the 700 MHz band – required the user to obtain a license. Did you even realize that you were supposed to obtain a license in order to operate your wireless system? Most musicians are blissfully unaware, and the FCC is currently re-evaluating the licensing rules.

Now, with those frequencies no longer in use by television broadcasters, the FCC has allocated that airspace to public safety use and for companies looking to expand their wireless communication possibilities (that’s the corporate greed part). New laws restrict wireless microphones and similar devices from being used in this frequency space so that consumer electronics products not even on the market yet can have free and clear access to this airspace.

Your wireless gear — mics, instrument systems, and in-ear monitors, are essentially tiny radio broadcasting stations. There are government regulations on how strong the radio signal can be, hence most wireless products we use only work properly within a range of 100 to 1000 feet. Of course, every performer in your band or performance group broadcasts on their own frequency within the allocated space (unless you’re specifically sharing a channel, such as for listening to the same monitor mix).

On June 12, 2009, the United States completed its transition to digital television. This switch made channels 2-51 the “core” television channels and left frequencies 698-806 MHz (or “the 700 MHz range”) vacant. The FCC planned that this 108 MHz range would be used for public safety services such as police, ambulance, and fire radio, as well as consumer use.

Why use this frequency space? The 700 MHz range is particularly appealing to developers of mobile devices because it penetrates walls easily — great for rescue personnel. Unfortunately for performers, though, most of the spectrum in the 700 MHz band was auctioned off to private companies such as Google, AT&T, and Verizon (to the tune of billions of dollars) back in March of 2008 for their future use. Hoorah! That’s government working for the people, right?

The entertainment industry, sadly, can no longer use the 700 MHz band for wireless devices because of the risk of interfering with emergency responders’ communications, or other new wireless services. In January of 2010 the FCC issued a notice that as of June 12, 2010, any wireless microphone equipment that uses frequencies between 698 MHz and 806 MHz is prohibited in the United States.

This gave artists only five months to invest in new equipment. “The short time frame for the 700 MHz transition presents a logistical and financial challenge to musicians who may need to replace equipment to comply with new FCC regulations,” says Chris Lyons, the Manager of Educational and Technical Communications from Shure.

This legislation has the potential to cost the entertainment industry millions of dollars. Any organization that uses wireless microphones, wireless in-ear monitors, wireless audio and video links, and any other similar equipment in the 700 MHz range must purchase new equipment before the deadline, which will hit by the time you read this feature.

Groups affected include not only live performers using wireless gear but also broadcasters, sports teams (those familiar Motorola headsets you see on the sidelines at NFL games, for example), and even prayer leaders in places of worship. Some Broadway theatres may not even be able to afford the thousands of dollars worth of required upgrades. Theater groups aren’t very profitable business ventures in the first place.

What are White Spaces?
The remaining 2/3 of the spectrum, from 470-698 MHz, still contains television channels, but not on every frequency. Between the stations are “white spaces,” where wireless microphones and similar equipment can lawfully operate, with a priority second only to television itself. Plenty of gear, such as the very popular Shure SLX and ULX series, use this white space.

Lobbyists are threatening the entertainment business’s ownership of this space, too. The FCC made the decision (under influence of major lobbying companies such as Verizon) to allow unlicensed devices to use the white spaces in this range for a new generation of mobile devices (possibly laptops, PDAs, portable game devices, cell phones, etc.). This has huge potential to interfere with wireless music systems.

If hundreds of fans at a concert or theater performance are carrying new wireless electronic devices — what Google executive Richard Whitt calls “Wi-fi on steroids” operating on the same frequency as your wireless guitar system, good luck finding a free frequency space for your wireless systems.

Is my gear even usable anymore? What should I buy?
Unfortunately, despite efforts from an industry coalition led by Shure and other companies lobbying against the 700 MHz Order, the legislation have been passed.

Find out if your wireless microphone system operates within the restricted bands here: http://www.fcc.gov/cgb/wirelessmicrophones/manufacturers.html

If your wireless microphone/instrument/monitoring system operates in the 698 MHz to 806 MHz range, you are now prohibited by law from using this equipment in the United States. Your only option is to invest in new equipment that operates in a different frequency space.

Digital wireless products such as the Line 6 Relay systems operate in the 2.4 GHz band and are unaffected by the new legislation, and new in-ear monitoring systems like the Shure PSM 900 (and many of their other systems) use frequencies below the 700 MHz space.

If you’re purchasing new wireless gear, be sure to thoroughly research what frequency space the equipment operates in. If it works in the white space area — 470-698 MHz, you’re in the clear for now. But be aware that in the future, you might need to upgrade to products using a different range as more consumer products compete for those frequencies.

To help defray the cost of new wireless gear, many manufacturers of wireless systems for musicians are offering trade-in rebates towards the purchase of new, compliant wireless systems, but those deals won’t exist forever. At least now when you’re justifying the gear purchase to a “significant other,” you can say “I have no choice. The government is forcing me to do this.” Hmmm, that certainly sounds like a tax-deductible expense to us!

Special thanks to Mike Lohman and Chris Lyons at Shure for their assistance in preparing this feature. 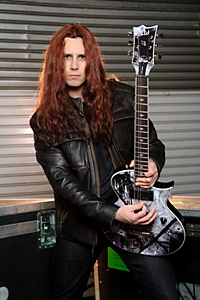