It is no secret that our staff is comprised heavily of self-professed 6L6-based, modern high gain lovers. It's not that we don't love the British crunch of the classic EL-34 tube designs, but quite frankly modern EL-34 based amps have left us a bit wanting. However, after putting the Diamond Heretic 100 through its paces, it not only changed how we think about EL-34 amps, but it may just make converts out of a few of us!

Countless vintage Marshalls have been gutted and modified trying to achieve the tone the Heretic achieves right out of the box — think hot-rodded Marshall tone with a Bogner-like response for starters. And lest we think it's a one-trick high gain pony, it also boasts a superb clean channel and a unique and effective effects loop.

With its feature-rich design, superb craftsmanship, cool looks, and tone to die for, this Heretic is not Anathema. It is, in fact, a high priest of the Church of Righteous Guitar Tone!

No, this is not your father's garden variety EL-34 based amplifier! The Heretic is a feature rich and well thought out design. Sporting four EL-34 Winged C's (arguably the best current production EL-34) and six 12ax7s there is plenty of power on tap.

The Heretic is essentially a two channel amp (Channel 1 Clean/Channel 2 Crunch) with plenty of flexibility within those channels to dial in EQ or Gain to taste. Channel 2 features Diamond's signature dual volume/gain design which not only allows the player to dial in two separate gain structures but two separate (or matched) volumes as well, via two independent volume controls. The amp ships with a simple but well built and practical two-button footswitch that allows access to all the amps channels (channel 1/2 or Channel 2 A/B). This effectively gives you three channels to play with (think clean, crunch, lead).

The amp's effects loop bucks the trend of having to engage a button or footswitch to activate it. Simply plug a cable into the effects loop Send input and the tube-buffered loop engages. When the loop is active the master volume knob on the front panel (labeled "E. Return Knob") becomes the amp's overall master, and when the loop is disengaged each channel's dedicated volume knob sets levels independently.

Moving to the rear of the amp, you will find a "Deep" function dial as well as a selector switch for 4, 8, 16 ohm speaker output. And at this point we should mention what a swell looker this amp is! Decked out in its Decada-style tolex, metal knobs, red LEDs and corner irons all around, not only is it a pretty face, but it's built to last as well.

Musicians familiar with modern channel switching amps will be right at home with the Heretic's layout. For players raised and weaned on "old school" single channel, non-master volume amps, there may be a slight learning curve. Fortunately, the Heretic's front and rear panels are intuitively laid out and do not require a degree in high science to figure out.

Basically, you have here a two channel amp: Channel one is your clean channel and channel two is your crunch and high gain channel. Both channels share the same EQ (presence, bass mid, treble), the only difference being Channel 2, which contains the addition of two separate volume and gain controls. This addition is no minor detail – the ability to set two separate volumes or gain structures within a single channel opens up a plethora of flexibility. For example, we like lots of gain for chugging power chords but prefer a brighter, lower gain setting for more complex chords. In this instance we simply set the Gain A to around 8:00 on the dial and Gain B to 3:00 and there you have it! Similarly, we hate relying on our soundman to goose our solo volume and this is where the dual volumes are invaluable – simply set your lead tone to a higher volume and no more getting lost in the mix mid solo! All of this is accessible via the supplied, simple to use footswitch (alternatively you can choose to select these via mini toggles on the front panel if you're just standing at your amp).

As we mentioned earlier the Heretic's effects loop does not rely on the typical structure found on so many amps that require switching it On and Off. The player simply plugs a cable in and it's On, unplug it and it's hard bypassed. When activated, each channel's individual volume control becomes that channel's effect send level control. As the owner's manual states, these would be the knobs to reach for if you begin clipping your effects. When the loop is engaged, the channel's individual volume controls are replaced by the effects return (E. Return) knob on the front channel, which now becomes the entire amp's master volume. In this context, we were able to balance out the individual channels to a comfortable level while cranking the E. Return knob to really get those EL-34's cooking. We liked this feature so much we preferred to leave it engaged all the time. Don't have any effect pedals to place in the loop? No problem, we simply inserted a short patch cable in the loop as a "jumper." Problem solved.

The rear panel is fairly pedestrian except for the inclusion of the Depth knob for contouring low end resonance. At first we were disappointed this was not accessible via the footswitch but ultimately discovered this to be a "set and leave" knob, so no big deal (more on this later).

And now for the moment we all waited for! For our sound evaluation we chose a Gary Kramer Cathedral Deluxe (super-Strat style guitar loaded with Duncan JB/Jazz pickups) and a Les Paul 1959 Historic with stock '57 Classic humbuckers. In the speaker/cabinet department, we chose to evaluate the Heretic through a MojoTone 4x12 custom-made cabinet loaded with Celestion Heritage G12H30s as well as the matching Diamond 4x12 loaded with Celestion Vintage 30 speakers.

The self-professed high-gain fanatics we are wanted to reach immediately for Channel B! However, we resisted the temptation and instead explored the clean tones of Channel A.

We dialed in a nice clean tone by placing all the tone controls around 7:00 with the exception being the bass control which we found sounded best around 3:00 to avoid the tone getting too "woofy" (we should also mention that our Mojo cab's G12H30's generate lots of bass). While it was a decent clean tone it was initially a little too soft and muted for our liking: great for simple chording but not snappy enough for percussive chord work. This began to change dramatically as we increased the gain control from our initial setting of 3:00 – the sparkle and snap we were looking for was indeed there, and the sound was absolutely huge when the volume was turned up loud. Single notes had a distinctive "sting" to them and chords had a lovely shimmer as well. Even with the gain up around 7:00 on the dial, the sound remained clean enough to be considered "clean" and only a hint of breakup was noticeable when really bearing down on the strings. We should also mention that in this context the addition of an overdrive pedal in front of the amp worked exceptionally well, driving the amp to a different place and providing an alternative to the molten gain we were soon to discover lurking in channel B!

Moving over to Channel B and switching to our Gary Kramer and Diamond 4x12 cabinet, as soon as we flipped the standby switch we felt like something really special was about to happen, and indeed we were right.

With nearly the same EQ settings as Channel A (all on 7:00 except bass on 4:00) and gain on 4:00 (yes that took some restraint!) we instantly conjured up a near ultimate "Marshall crunch" – think AC/DC, early Van Halen and even Lick It Up-era Kiss. What impressed us most was the amps "girth" – nothing thin about this tone whatsoever. Reaching around to the back of the amp we turned the Depth knob up about midway and things only got better! Even though the tone was significantly "gained up" (even in this low setting) chords rang out clear with all notes discernible and lots of chewy harmonic swirl as chords and notes decay.

Before exploring further tones in Channel B we actually ran through a few songs with a full band using our glorious crunch tone. It was in this setting that we really got to hear what the Diamond cabinet could do. The sound was absolutely massive, sat perfectly in the mix and the bass never flubbed out. Simply put – it made our guitars sound like they were three miles wide.

The Diamond cab really impressed us in this full band setting. 4x12 cabinets are notorious for being directional but we experienced none of that phenomenon – the sound dispersed well with good imaging, regardless of the listening angle, and the sound had a great "thump" to the low end like a good half stack rig should!

Channel B's crunch tone was so sublime the good folks at Diamond could have called it a day right there and we still would have raved about this amp! What's great about this amp is the amount of useable gain on tap. Turning the dial up from our starting point of 4:00 revealed a significantly "gained up" tone that was loaded with harmonic swirl and sparkle. Even with the setting up around 7:00 or 8:00 the tone never got messy and you could still hear the "crack" of the pick on the strings. This setting is high gain heaven, perfect for palm muting or chugged chords. Slayer, Metallica, Megadeth? In the bag!!!

One thing that remained constant across both channels during our tone evaluation was the necessity to really crank the mids. Don't be afraid, mids are your friend! Keeping them too low on this amp robs it of its glorious crunch and sparkle—sometimes dramatically so. We found the sweet spot for all channels to be around 7 on the dial.

What was it about the tone that won over our 6L6 loyalists? It was the delivery of classic and modern British crunch without the jagged, sometimes abrasive edge that is a hallmark of EL-34 amps. This amp knows how to deliver all the goodness of El-34 tone while leaving the bad elements behind. Kudos for superior EL-34 amp design. It was also very good at providing detailed note separation, even through the high-gain settings.

The Heretic has a well written and informative sixteen-page owner's manual downloadable from the Diamond Amplification website. It includes everything you need to know about operating the amplifier as well as some useful sample settings to help you start "dialing in" the amp.

The Diamond Heretic (MSRP $3,499) sells for approximately $2,699 street. While this is a little higher than some of the flagship models offered by "the usual suspects," it is in line with boutique amp pricing and based on its features, superb craftsmanship and sonic abilities we consider it good pricing. 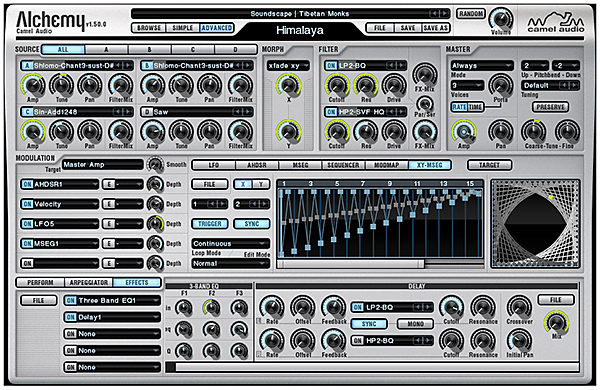