In today’s world of modeling amps, it’s refreshing when a new company comes out with a pro-level all tube recording preamp. Digital technology has its merits, but in the end, nothing beats the warm magic that tubes deliver… and the Emerson Williams darkblue dishes up plenty of real tube tone.

Darkblue’s ultramodern looks only hint at the array of classic and modern sounds it is capable of producing. If you’re seeking a great sounding, professional, tube preamp for your pro studio, project studio, or guitar rig, darkblue may be just the product you are looking for. Whether you play blues, rock, country, or jazz, darkblue has tones you can use to make you music come alive, and you can record those tones without ever miking a single speaker.

The Emerson Williams darkblue is a single channel, two rack space, all tube guitar pre-amplifier with the following specs:

Out of the box, darkblue is an impressive, if not futuristic looking unit. Four clear plexiglass windows highlight the front panel – these allow you to see the inner workings of the preamp. Inside, you can see the very well laid out and constructed PC board as well as the five preamp tubes standing at the ready, anxiously awaiting your command to deliver warm, silky tones.

With a flip of the front-panel mounted standby switch, the darkblue jumps to life with a vibrant display of color. Each window emanates a mesmerizing blue glow, highlighting each of sections control functions, which have been etched into the clear plastic. Brightness is adjusted by a knob located on the rear panel. We found this feature useful in order to match the different ambient light levels you may find when moving the unit between studio, stage, or outdoors. Additionally, each of the front panels knobs has a notch that is backlit by the blue LED’s, allowing you to easily see what position a knob is set to.

Our only complaint about the otherwise-excellent interface is that all of the front panel toggle switches default to Off while in the Up position. We found this counter-intuitive, as the Down position is typically associated with Off. Granted, this is our entirely American point of view – most European musicians will be just fine with the switch operation.

Once you’re ready to play, dialing in a sound is pretty straightforward. The front panel controls are arranged logically and are broken up into four distinct sections. From left to right they are the Input Stage, Tone, Drive, and Master Output.

The Input Stage features a standard quarter-inch jack to plug your axe into. Instead of using dedicated hi or low-gain input jacks, a gain control is provided which makes balancing input signal levels among different guitars or pickup types a breeze. 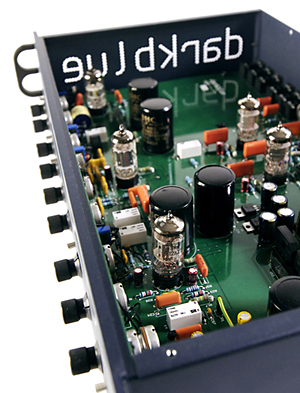 The Tone section is highlighted by a four-band active EQ. In a break from the traditional use of a three-band passive EQ common in guitar amplifiers, darkblue’s tone circuitry uses a new design in which the signal is split into four pieces. According to the manufacturer, each portion is fed through a bandpass filter to drop out unwanted frequencies and then remixed to create a clearer, more defined sound. In addition to the standard bass and treble controls, you can also custom tailor the low/mid and high/mid levels to suit your tastes. The mid range setting can also be shifted with the flip of a Light/Dark switch. The tone section also includes a toggle to completely remove this section from the circuit, but in our opinion, the best sounds always occurred when the tone circuit was engaged.

Like the Tone section, the Drive section can be added or deleted from the signal path. The Drive control allows you to dial up tones that range from squeaky clean to fairly dirty. However, if you’re looking for a very high-gain, rectifier type sound, this might not be the preamp for you. More on this in the Sound section, of course!

Turning our attention to the rear panel, the preamp includes a bypassable, stereo, parallel effects loop. A mix control enabled us to vary the ratio of wet to dry signal from 5% to 95%.

For studio use (the primary use of darkblue, we’d imagine), a pair of XLR balanced D.I. outputs are included. These outputs feature speaker simulation circuitry to achieve the best possible transfer of tube tone to your recordings.

Our test unit came with the optional, cordless, remote footswitch to engage or disengage the effects loop, tone, and drive circuits. With the never-ending cluster of cords that seems to pervade our studio (or stage setup), any time we can eliminate a wire is generally a good thing. We initially noticed a slight bump/glitch in the audio when activating any of the three circuits via the footswitch, but as soon as we moved it a little bit further away from the amp, the noise went away. Let that be a lesson to us all – footswitches work better on the floor than on our desktops!

Since darkblue is primarily intended for studio use, we decided to test it out in our ProTools LE-based studio using a wide variety of instruments that would cover a range of styles. The instruments used included a custom Strat-type guitar featuring two Seymor Duncan vintage single coils in the neck and middle, and a JB Junior in the bridge. We also used a late-‘80s Ibanez RG-series guitar with dual humbuckers, and to please the jazz folks out there, a 1979 Ibanez George Benson.

For reference, we used the darkblue’s XLR frequency-compensated outputs direct into a Digidesign Mbox2. All of the sonic descriptions that follow were based on actual recordings made using darkblue. In an effort to avoid artificially coloring the sound, we made sure not to use any additional EQ or plug-ins, with the exception of a small amount of stereo digital reverb.

For comparison, we tried recording with the uncompensated outs and feel that they are best left for use in a live setup in which darkblue drives a tube power amp or stand-alone guitar amp.

Inspired by the dark and mysterious styling of darkblue, we couldn’t help but reach for our jazz guitar first. Using only the Input stage and the EQ section, it was a snap to dial up a tone that would make Wes Montgomery proud. With the Drive stage removed from the circuit, it was impossible to distort the signal. Instead, pure tube warmth abounded. The higher we set the input gain, the thicker the sound became, without any loss in definition or clarity.

Chords sounded full and complex, whereas single-note lines were round, full, and warm. To further enhance your sonic possibilities, the Input section also has a dynamics control and an Edge switch. To our ears and fingers, the dynamic control seems to affect the overall tone and feel of the instrument. Low settings had a more spongy feel with a reduced pick attack, whereas higher settings give a brighter sound with more bite. The Edge control acts like a bright switch. For jazz, the Off position was just the ticket.

If you’re feeling funky, darkblue has got you covered as well. Leaving the drive stage Off and the Edge switch in the On position, we reached for our two solid bodies and pulled out our best James Brown riffs. Zeroing in on squeaky-clean funk tones was a breeze. Looking for an ‘80s type of skank Strat sound? No problem. Just a few tweaks of the low/mid and high/mid knobs and we were hangin’ with the best of Michael Jackson’s rhythm section. If your pick attack is a little too strong, turning the dynamic control down a bit will take some of the edges off of that savage right hand.

Enough of all this clean stuff – let's get to the dirt! We pulled out the Strat to see where this amp’s roots lie. Engaging the drive channel puts the “blue” in darkblue’s name. The blues is one of this preamp’s strong suits. With the Drive set about half way and the Edge switch On, you can pull off anything from Hendrixy double stops to red-hot Stevie Ray licks with just a twist of your guitar’s volume knob. The amp really responds well to how hard or soft you hit the strings. It reacts in a similar fashion to a traditional amp thanks to the all-tube signal path.

Cranking the Drive up further takes you from shades of blue straight through classic rock. Throughout the range of gain settings, the notes remained well defined, even during over-the-speed-limit playing ala Paul Gilbert or Joe Satriani. However, if you’re looking for a hard rock, metal, or Metallica-type tone, there are probably better choices out there.

While you can dial up an array of high-quality medium to high gain lead tones, we felt that the sonic character of the high gain rhythm tones wasn’t the direction that this preamp was intended for. In addition, as the gain was increased to the higher end of the range, the preamp ran a bit on the noisy side, particularly noticeable with our single-coil pickups. [Editor’s Note: According to Emerson Williams, since shipping our review unit, they have changed a few values internally that result in slightly more gain at the high end.]

As is the case with most tube amps, you really need to spend some time fiddling with the knobs to truly explore all the possibilities this preamp has to offer. We found it capable of covering a pretty wide array of styles due mostly to the very interactive nature of the various control sections. The fact that it can print a sound to “tape” that is a pretty realistic approximation of a miked speaker cabinet makes it all the more valuable a tool to have in your studio's arsenal.

It should be noted that the addition of reverb really helped to liven up the sounds. Without it, the sounds were a bit on the sterile side and not quite as convincing, but the likelihood of recording a tube guitar amp without a single effect, reverb, or delay on the signal, especially in studio use, is highly unlikely.

Although the preamp we received did not include any documentation, this was just an oversight with shipping us a test unit. A full manual was available for download in PDF format from the company’s website. Ordinarily, the amp ships with this electronic documentation on a CD-ROM.

The manual itself was well written. All of the features and specifications were discussed, although not in as great detail as some of the supporting articles on the Emerson Williams website. Although the documentation doesn’t offer any specific sample amp settings, it does a good job of pointing you in the right direction on how to start creating tones. It lets you conjure up your own sounds without the coloration of their influence.

While on the expensive side, we feel that its pricing is in line with other boutique gear, and it would be a welcome addition to any professional recording studio. However, for personal/non-studio use, we don’t feel that the wireless footswitch is worth the additional cost. 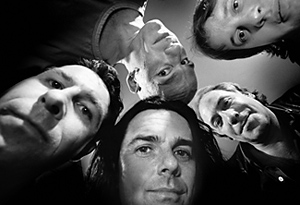 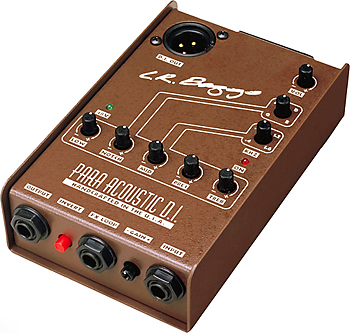 Howie Stern is a professional musician and guitar instructor residing in Mammoth Lakes, California. No, he's not a radio personality. Contact him at howie@musicplayers.com.