It’s not often stands get any detailed attention come review time. But Ultimate Support has been making stands for decades. We still have (and use) our original 1980s Apex stands. Ultimate Support disappeared from the radar for a bit, but have returned to the market and continue to make excellent products. It has been interesting to see the evolution not only of the keyboard stand itself, but how the various attachments reflect the technology of the day. Back in the ‘80s, it was considered amazing just to have a microphone attachment on your keyboard stand. Today, there are attachments for laptops and tablets, too!

While these three products can be used together, we will look at each one individually first. Overall, Ultimate gets high marks for filling a need in a flexible way.

First, let’s talk about the Apex keyboard stand. The original version from the 1980s was a triangular column with a handle in the middle that, frankly, broke off quite easily (the stand itself was rock solid). The two pairs of tiers that were stored in the top hollow section were the same size (with optional, longer arms for the lower tier), and the mic attachment originally connected directly to the clamp screw that held the keyboard tiers (leading to the plastic breaking down over time) before migrating to the side of the column. Fortunately, Ultimate has continued to improve and refine the design, increasing both strength and durability.

The current stand sports a central column that has rounded edges, a stronger handle that will not easily break off, and the mic (and now iPad or laptop) attachments go on top of the stand—not off to the side. The included tiers are two different sizes by default, 13 inches and 18 inches (likely to reflect a heavier weighted-keys synth on bottom and a lightweight synth action keyboard on top). The stand can hold a total of 125 pounds per tier, and the tiers are height adjustable. There is also a cord management system (plastic clips) in the center of the stand to help keep things organized. Sadly, one of these broke off in transport to our studio, but they are easily and cheaply replaceable.

The Apex 48 Plus also includes a mic attachment/boom arm and a protective tote bag, big enough to hold the stand and its various optional attachments.

Perhaps the only ding against an otherwise well-designed and time-tested product remains the base and feet of the stand. Anyone who uses a sustain pedal may find the feet of the stand get in the way. One trick we have used over the years is applying a little bit of Velcro to our pedals (Bottom) and on top of the Apex stand’s legs to hold our pedals in place. But forget about sticking a foot controller underneath. You’ll need a stand with a different type of base for that.

Now, let’s talk about the HyperPad: the iPad five-in-one stand. As seen in the photos at the start of this review, you are given several options: landscape stand, portrait stand, mic stand clamp, desktop clamp, and a mic stand (a gooseneck arm enables you to mount the iPad directly to the 5/8 inch thread on a mic stand). The HyperPad is compatible with iPad 2 through 4th generation. There’s also a HyperPad Mini for the smaller tablet.

The HyperStation QR is an interesting addition to Ultimate Support’s accessory line. It supports laptops, small mixers, drum pad controllers, etc., and has an adjustable second tier. Perhaps the coolest part is that the support arms and center post can be released easily without dismounting your laptop, etc., and be moved directly from the Apex keyboard stand to a mic stand! That configuration would look like this:

Given how modern keyboard rigs incorporate laptops, this makes things very easy to transport and convenient to use. Bravo to Ultimate Support for modernizing their design. 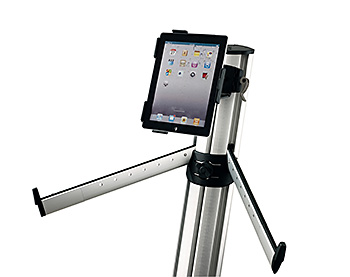 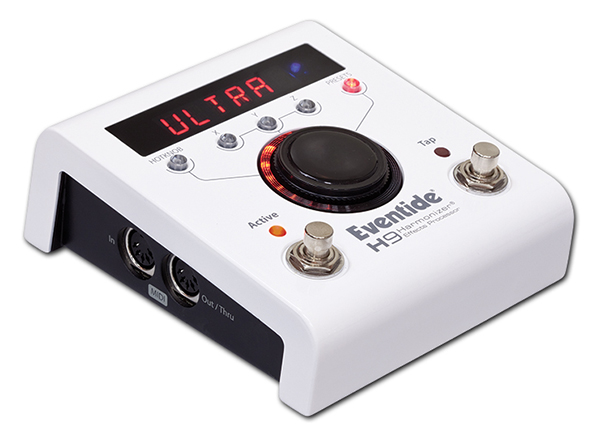