Since the Ibanez Jem inception back in the 1980s, it has long been regarded as one of the finest super-strat shred guitars, initially designed for guitar virtuoso Steve Vai and subsequently embraced by thousands of other players. In 2011, Ibanez introduced the Premium line of guitars, which features the best craftsmanship from their Indonesian factory. Inevitably, it was just a matter of time before we saw a Premium series Jem, which would certainly beg the question, just how close does this get to the Japanese-made Jem guitars? We don’t want to give everything away up front, but since getting our hands on this guitar, it has been nearly impossible to put the instrument down… much to the dismay of our Japan-built Jem, which gets lonelier by the day.

It’s hard not to be impressed by the design of this latest Jem—she’s hot! The new Blue Floral Pattern (BFP) design is considerably darker and less gaudy than the original, fading to very dark blue/black at the edges. The American basswood body is cut to the familiar Jem shape, and the characteristic lion’s claw tremolo cavity and monkey grip put us at liberty to swing our test guitar around with reckless abandon (if you haven't caught the Passion and Warfare references yet, you need to brush up on your Vai listening).

The Jem77P has an American basswood body and features an Ibanez Edge II Zero tremolo and blue DiMarzio pickups in an HSH configuration: Gravity Storm humbuckers and an Evolution single-coil, all passive pickups with Alnico magnets. Not initially apparent, but upon closer inspection, we discovered what appeared to be “extra” polish or some other substance both in the lion’s claw cutout and the center single coil cavity. The smears would have been measured in millimeters and were minute, but they existed. Even with the smear and a few tiny scuffs on the neck where the fret dressing/finishing was performed, we felt the finish was still well done overall and very aesthetically pleasing. From two feet away, you’d never notice a thing. For years, Ibanez has been making the Jem guitar line with five-piece maple and walnut necks (original late ‘80s-early ‘90s models had one-piece maple). The Jem77P featured a five-piece Wizard design with KTS titanium rods and (nickel) jumbo frets. The thin, wide, 400mm radius neck profile was 43mm wide at the nut and 58mm wide at the 24th fret. Thickness was a mere 18mm at the first fret and 20mm at the twelfth fret.

The Ibanez Jem 77 features a maple fingerboard with a stunningly gorgeous, and matching, blue tree of life inlay. The inlay contrasted perfectly against the maple, making it an excellent choice for this instrument.

Rounding out the neck was a matching floral pattern headstock with a locking nut, Ibanez tuning machines, and familiar Ibanez Premium logo. The finishing touch on the headstock was the JEM script that made us instantly think, “Yea, we’re playing a JEM!”

Aesthetically, we did notice the walnut on the Jem 77P was considerably thicker than on the Jem 7VWH. This led to a slightly less lustrous design when compared to our higher-end Jem. We also noticed the seemingly simpler pieces of maple used on the Jem 77P compared with the richer look of the 7VWH's maple neck.

The Jem77P includes a black, hard shell case. We were happy to note the case’s traditional hinges, as two of our Ibanez Prestige cases are each missing pins that hold them together (we log a lot of miles on Jem guitars). Included in the case was an Ibanez multi-tool (we love these) for essential guitar maintenance.

After tuning the guitar, subtracting a little relief from the neck, and dropping the trem height a hair, we found the Jem77P held pitch fairly well and played as a Jem should: effortlessly. The setup as the guitar shipped was fine—we just preferred the action very low. We found ourselves tweaking the fine tuners on the Edge Zero II, but only occasionally.

The neck played virtually identical to our Jem 7VWH, slick and even throughout its length. Eyes closed, we would have guessed we were playing a Jem. The neck profile on Jems are that characteristic of the product line, thin and tailored for ease and speed. The fret edges were filed away well and smoothed out to near perfection. Ibanez's fret treatment, in general, makes their guitars a pleasure to play, and our test instrument was no exception. The five-way selector switch proved to be slightly problematic—in an ‘80s Strat way. Although it functioned just fine, the pickup selector plastic tip fell off our test guitar within the first ten minutes of playing (we were seated at the time). The switch tip is a loose fit, and the selector switch itself has a little more play in it than the hardware on our Jem 7VWH.

The Edge II Zero tremolo was perfectly suitable for this Jem. This tremolo featured long-needed design improvements over the early Lo Pro Edge design such as a screw-in tremolo bar (as opposed to the nylon washer system of the original), and the string lock screws were easily accessible directly behind the saddles (as opposed to the long ones on the original Edge, which necessitated stretching the springs in order to access them to perform a string change). The last additional design enhancement was a flip-away truss rod cover, eliminating the need to remove three screws to access the truss rod as on our other Jems. Such a small change yielded a no-brainer result that it made us wonder why it took several decades of guitar refinement to arrive at this. (Our white Jem lives with no truss rod cover to allow easy tweaking of the neck.)

The biggest cause for concern to some players, though, was that strings on the test guitar had a slight (approximately 1.5mm) offset from center over the fretboard, and this offset was visible to the naked eye. The low E string had a little more fretboard from the edge than the high E. We found that this had no impact on playability or tuning stability whatsoever, and that the strings under our fingers felt as they should. But, we did notice this manufacturing deficiency that wasn’t present on our Japanese-made Jem.

We picked up our Jem 77P in the evening hours and wouldn't have slept without plugging it in! So, we plugged it into our computer and fired up Native Instruments Guitar Rig 5, which was routed to a set of inexpensive M-Audio monitor speakers. We were pleasantly surprised with the sound and presence of this Jem. After about a half hour of our best shredding, we put the guitar away. Our first impression was this guitar delivered the goods and then some.

The next day, inspired by our worst test case scenario, we fired up a Marshall Silver Jubilee 2555 100-Watt head and a 1960 4x12 cab, along with a healthy dose of effects. Playing the guitar, we instantly noted this guitar was aggressive sounding. We loved the DiMarzio Gravity Storm pickups! We loved them so much, we instantly went online to see if they were available in white for our Jem 7VWH. The Jem 77P sounded significantly better than our Jem 7VWH, making us both understandably excited and upset at the same time (the Jem 7VWH costs nearly triple the price of the Premium instrument). The Gravity Storm pickups were very well balanced between the neck and the bridge. The single-coil DiMarzio Evolution was well matched and contrasted with the humbuckers nicely.

The guitar definitely had character. Harmonics and dynamics jumped off the fretboard effortlessly. Cleaner passages were pristine while high gain palm muting was rich and aggressive. We really wished we could have said the same about our Jem 7VWH. And cleaner, funky rhythm parts played on the Evolution single coil pickup rivaled the sound of our best Strat-style guitars. Clean, arpeggiated lines begged for healthy doses of chorus and reverb. They were pristine sounding and highly articulate.

Our final sound test of this instrument was with a full band rehearsal. The band consisted of nine members, including four backup singers and a keyboard player. Being it was a Cher tribute band, we needed a range of instruments to cover her thirty years-spanning catalog. But with the Jem 77P, we didn’t. We played this guitar for all of the electric parts, and it never sounded out of place. The Jem neck profile is a pleasure to have underhand, and this rehearsal went on for five hours. A fatter neck would have definitely caused some fatigue.

Our clean, funky lines through our favorite compressor pedal yielded an excellent snap, and cut through the mix perfectly. Our heavier rhythms played through the Jubilee head were quite prominent and a pleasure to listen to. The output from the guitar was always dynamic and articulate. Our number one, high-end, twice-the-cost, single cut guitar sat unused all night... and really, we’ve barely touched any of our other guitars since this review cycle began and finished. So despite the minor imperfections only really noticed by way of direct comparison to our pricier Jem, this is the Jem we love, and we’ll definitely be purchasing it.

The Ibanez Jem 77P ships with a familiar, every-guitar-they-make, multi-language instruction/adjustment manual, which covers many tremolo systems and electronics. The information that was applicable to our guitar was useful in setting things up to our particular taste.

The Ibanez Ibanez Jem 77P (MSRP $2,133.32) sells for approximately $1,600. If not for the fretboard/string alignment issue, we would have considered this a great price for the guitar. But as such, it’s not a cheap guitar. However, considering a Japanese-made Jem is twice the price, there is plenty of money left over if you feel like addressing the fit and finish issues mentioned in this review. You'll still be ahead of the game by roughly $1,000 and have a hot Jem color scheme on a guitar that sounds better than the pricier version.

The single most harrowing issue of this instrument was certainly the string alignment. We would like to be perfectly clear: this issue was only aesthetic for us. It did not affect the playability or sound of the instrument in any way, shape or form, and while we intend to purchase this guitar, we have no intention of correcting this detail. At a casual glance, you’d never even notice this issue. Despite the minor annoyance, the Jem 77P is as good, or maybe even better, than its pricier product line siblings. 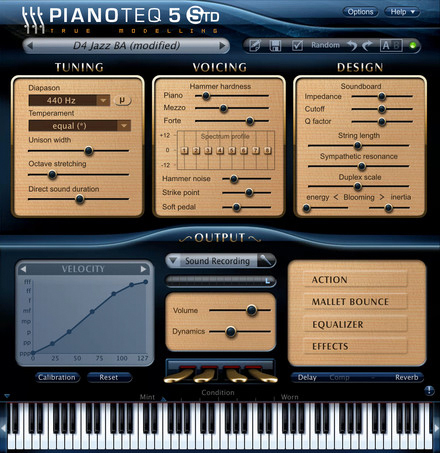