If you’re a keyboard player like us, you’ve probably been relying on a column stand for years. But as reliable as the popular Apex stands are, you’ve probably run across a few challenges with them that can be quite frustrating: it’s hard to place pedals under them—especially foot controllers, and when you’ve got a pair of keyboards stacked, it’s very difficult to read the display or access the controls on whichever keyboard sits on the lower tier.

Those issues don’t exist with the very sleek looking and solidly constructed, K&M Spider Pro. To speak in automotive metaphors, if the Apex stand is your reliable Honda, then the K&M Spider is a BMW, a higher performing, sports tuned stand that accomplishes the same basic driving objective, only better in most ways.

The half-moon curvature of the column gives the Spider Pro a sleek, modern look. It’s available in black or silver, and the first key difference you notice is that the base has four legs. Unlike the Apex’s three feet that flip-flop their way out of the bottom of its column, the Spider’s feet stay attached and simply rotate from an up to a down position during setup. The beauty of this design, of course, is that the base of the stand isn’t resting on the ground, leaving a huge, open area for all of your pedals and foot switches, possibly including your faithful Moog Taurus or Roland MIDI pedals.

The next major difference in design comes to the arms that hold your keyboards. Capable of supporting up to 77 pounds per tier (we’re afraid to see that keyboard), each set of arms is telescoping, meaning that a simple, spring-loaded mechanism lets you extend or contract the length of the arms. This isn’t just about accommodating a larger keyboard, but in the case of the lower tier, it enables you to move that keyboard out from underneath the keyboard above for easier access to controls. However, you won’t actually need to do that. The top tier is angled—not horizontal, as it is with an Apex stand. The angled tier automatically positions the top keyboard in such a way that we gained unparalleled access to the controls on our main controller keyboard workstation on the lower tier, without needing extra clearance height between the tiers. This simple design difference is one of the huge advantages of this stand.

Just like when comparing fine European sports sedans to their Asian or American competitors, beauty is in the details, and it’s here that you see great industrial design at work in the Spider Pro. First, the arms themselves don’t detach and get stuffed into the top of the column. They flip up and click into place in a pair of tracks/rails in which they slide up/down for height adjustment. A simple rotating knob locks the height adjustment into place, and if there were anything for us to grumble about, the only fault we have with the stand is just a tradeoff in design: in order to flip the arms up into the column’s tracks, you have to change the height of the tiers, sliding them down the shaft in order to have room for the arms to fold (each pair slides together). So… take a marker or some tape and mark the column once you’ve found your ideal height for each tier to make setup a piece of cake the next time you set up your rig. The mount itself also contributes to the beauty of the design. Where the Apex stands have a big block of plastic that sits flush with the column stand itself for the actual mount attachment, the Spider Pro’s arms extend from rails in the column, leaving an open gap in between each arm and your keyboard. This facilitates the best possible cable management, as we could route all of our cables across the back of our synths and then drop them straight down the middle column, where a set of cable management clips further organize the wiring. From the audience perspective, nobody will see a mess of cables dangling off the back of your keyboards with the Spider Pro. K&M sell a variety of optional attachments for the modern keyboard rig. The standard mic thread on top of the column allowed simple installation of the telescoping microphone stand, and a laptop computer holder can be attached, in-line with the mic stand. This small tier could alternately be used to hold one of those mini/micro keyboard controllers. K&M also has an adjustable iPad/tablet holder that slides into the rail system, bringing the tablet closer to your hands and face, and without taking up room on the very top for your mic and/or laptop. There’s also a sheet music stand attachment, but odds are that if you’re using such a cool stand in the first place and you can read sheet music, you’ve got the score running on your iPad. An optional, non-padded, gig bag is available to carry the stand if you’re planning to take the rig out of your studio. The Spider Pro is tall enough to accommodate six-foot tall musicians wearing platform boots, but it worked just as well for us when seated. There’s a shorter Baby Spider Pro available for players who only need a single tier and not as much height.

The K&M Spider Pro (MSRP $439.99) sells for approximately $350. It’s pricier than an Apex, but everyone who has checked it out in our studio has come away impressed by everything about it from looks to functionality. If you’ve longed for a column stand but couldn’t get past the limitations of the classic variety, K&M's Spider Pro is a great alternative. 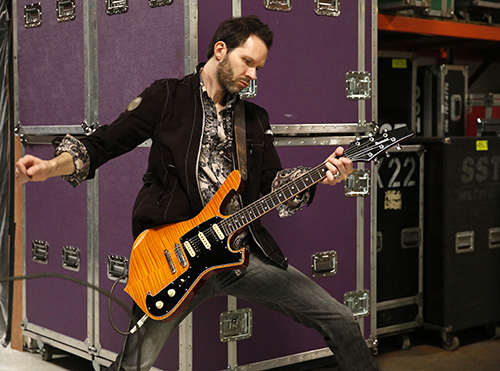 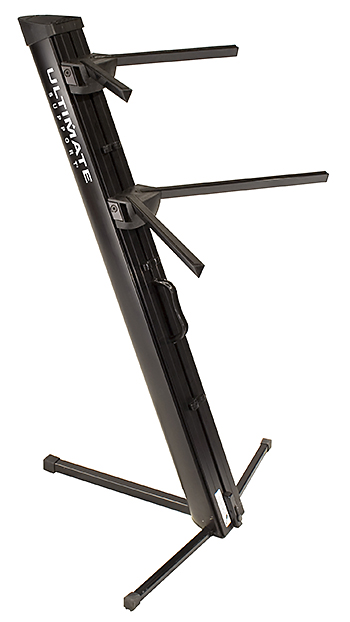