The Same, Yet Not Really.

Most professional singers in rock and pop learned long ago that while you can always “get by” with a Shure SM58 (the industry standard/reference mic for live performance), there are hundreds of other mics that may offer specific sonic advantages for different vocalists… and Shure has a wide range of mics to address different voices and different performance situations.

We previously took an in-depth look at the differences between SM57, Beta 57a, and the related -58 microphones, but this time we turned our attention to a microphone choice that is a great alternative for many singers: the Shure Beta 87.

Designed to deliver studio-quality sound in live performances, the Beta 87 makes a fantastic choice for singers who crave pristine clarity and sparkling high end in their vocals. But the question that will undoubtedly drive you batty is determining which Beta 87 is right for you: the Beta 87A or the Beta 87C. Each sports a different polar pattern, and depending on your typical live situation, the resulting difference can be quite pronounced.

The Shure Beta 87C is a condenser microphone with a cardioid polar pattern, while the Beta 87A features a supercardioid pattern. The difference:

Cardioid: Primarily picks up sound within a 130-degree angle in front of the microphone, has reduced sensitivity to sounds coming from outside that range, and rejects almost all audio directly behind the mic.

Super-Cardioid: Picks up sound within a 115-degree angle in front of the mic, and has almost no sensitivity to sounds beyond 120-degrees off-axis on either side. However, it does, in fact, pick up a narrow range of audio hitting it from directly behind the mic.

Both mics feature a frequency response of 50Hz—20,000Hz, an internal low-frequency roll-off to reduce boominess, an advanced shock-mount system to reduce handling noise, and a built-in pop filter to reduce sibilance and breath noises. The dynamic range is 117 dB apiece, and the signal-to-noise ratio is 70.5db in the Beta 87a and 72 dB in the Beta 87c.

As they are condenser microphones (as opposed to your typical live dynamic mic), each requires phantom power from the mixing board or other preamp devices for power.

The modern, sculpted design of these mics make them a thing of beauty, and given the subjective nature of all things musical, many singers will be drawn to the mics for their looks before even hearing a single breath.

Choosing the right version of this mic comes down to some intriguing word-play from the folks at Shure: they introduced the Beta 87C model to improve the sound for vocalists who rely on in-ear monitoring (IEM). To that end, we have to agree: there is a significant difference in the resulting sound that makes the Beta 87C mic choice preferable for typical IEM users.

Because the 87C’s cardioid design picks up a wider field of audio than the original 87A’s supercardioid pattern, we found more ambiance present in the IEM mix, and this subtlety was always preferred by our vocalists when choosing between the mics. With the 87A, the vocals were so isolated that additional reverb or delay was necessary to make our vocalists happy with the mix.

However, the output from this mic was noticeably lower than the 87A, and we had to raise the gain on our mixing board when using the 87C to arrive at almost-equivalent levels. In general, for our vocalists who sang on the softer side, we found that the additional gain before feedback from the Beta 87A resulted in a better overall vocal “experience.”

When singing live and relying upon floor monitors instead of IEMs, both our vocalists and the other musicians listening to them preferred the sound of the Beta 87A. Monitor placement should be angled and to the sides of the mic stand, since the 87A can pick up some sound directly behind it (resulting in feedback when pushed to high gain levels).

Both mics did an excellent job of isolating the vocalist, and they are each best suited to solo vocal performances as opposed to a group of singers providing backing vocals. Handling noise was minimal, and at least as good as typical SM58 use.

In the end, the only real challenge will be for the singer who routinely switches between gigs with IEMs and gigs with floor monitoring. For those performers, our advice is to suck it up and purchase one of each. Otherwise, buy the one for the performance scenario you expect to have more of over the year or so. You can always pick up the other one down the road… and with a restated, emphatic, “Yes,” you will hear a real difference between these mics when you plug in your IEMs.

The Shure Beta 87A and 87C microphones sound fantastic, but like us, you can go crazy trying to pick the right one, because if your monitor needs constantly change, you’re going to want to keep both versions of this mic in your gig bag.

Stepping up from a classic SM58 will provide the sonic equivalent of making the switch from standard definition television to high definition: it’s as if a great cloud is lifted and a new clarity is revealed that you hadn’t heard before. Our initial response was that we were using a studio condenser mic, except that it was fully usable in a live rock band situation, something we would never attempt with our collection of studio mics. 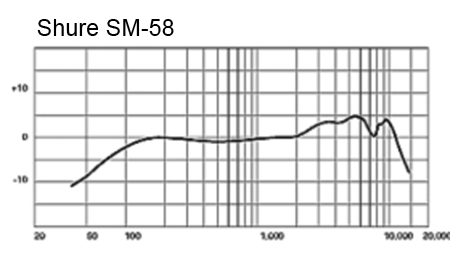 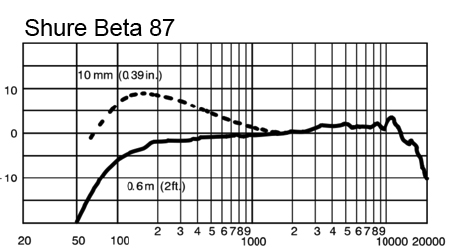 Reviewing frequency response charts easily reveal why you might get this feeling of gained clarity: the Beta 87 mics have greater frequency response at the high end (20 kHz vs. 15kHz), and in addition to less low end (50Hz vs. the SM58’s 40Hz), there is a huge difference sonically across the midrange. Where an SM58 has a relatively flat profile throughout the mids, the gradual reduction in low-end presence in the Beta 87 runs through these mics mids in more of a gradual slope than a flat response. A bump in the frequencies above 10 kHz also contributes to the top-end “air” that isn’t found on any of the other Shure live vocal mics.

We had a few different types of vocalists sing through the mics, and found that the sound of this mic was best with singers who are overly boomy in the low range such as men in the baritone and bass range who could use a little thinning out of their lower registers, and the mic was fantastic with a female voice in the mezzo-soprano range, as there was no unnecessary boominess in the bass, and great air on top. Female jazz divas and rock singers with sultry or “smokey” voices are tailor-made for this mic.

Male and female vocalists alike in the soprano range should be particularly wary of this microphone, as it’s not the right choice for you. There’s just not enough low-end presence to give those voices depth, and there’s so much high end that you can end up sounding too thin and bright.

All Shure mics come with straightforward user guides that cover both the mic specs as well as suggestions for optimal microphone placement and use. The Beta 87 mics even included a template to hang over your mic to ensure proper placement of floor monitors in order to reduce the chance of unwanted feedback!

The fun doesn’t stop there, however, because one trip to Shure’s website will provide you with more help documents on mic usage and recording tips than you could ever hope for.

The Shure Beta 87A and Beta 87C (MSRP $311) each sell for approximately $250. This is a very good price to get studio-like vocal sound out of a live performance microphone. The only problem is, of course, choosing the right one, so either audition them before you buy, or if you gig regularly with both monitoring scenarios, purchase both.

If you can only afford one, though, and you find yourself playing in a variety of monitoring situations, we’d err on the side of caution and go with the Beta 87A.