From the very first note and downbeat of the second Revolution Saints record, Light In The Dark, we loved everything about it! Alessandro Del Vecchio (Hardline/JORN) produced these songs masterfully. A solid AOR effort, the production is top notch and allows the songs to shine through in a way seldom heard today. It’s hard to believe this band effort was recorded individually in multiple studios across the globe, given that the songs sound as tight as a band who have been playing together for decades.

Doug Aldrich (Whitesnake/Dio/Dead Daisies) is no stranger to dazzling his audience with top rate playing and sound, but this album might be our favorite work of his to date. The guitars are appropriately forward in the mix and just brutally, perfectly executed. We typically experience guitarists who either play for the song or shred their eyeballs out. Aldrich has the experience to strike a fine balance between the two, and from beginning to end, he melts faces while retaining the songs hooks and harmonic structures. These are the marks of an excellent guitar player. He dazzles without ever getting boring.

Deen Castronovo (Journey) delivers passionate, powerful vocals on the recordings just as if he were singing on a new Journey record. As a matter of fact, nothing against Arnel Pineda, but we think Castronovo is the stronger vocalist. Singing drummers rarely work out, but damn, this is good. Really good. The Steve Perry/ Journey influences cannot be ignored, and that style of AOR is reborn here with a breath of fresh air.

As if this wasn’t already enough, Jack Blades (Night Ranger/Damn Yankees)—who typically needs no introduction, provides excellent vocal harmony support and keeps the low end locked in with the straightforward-yet-thunderous grooves of the record.

More records should be made to such a degree of excellence. Maybe there’d be more interest in the craft of being in a band, touring and making great music if this was the case. Bands both big league and small be on notice: Revolution Saints set the AOR benchmark high, and it will not be an easy one to top.

Line 6 Updates the AMPLIFi Experience with ... 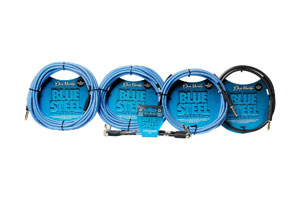