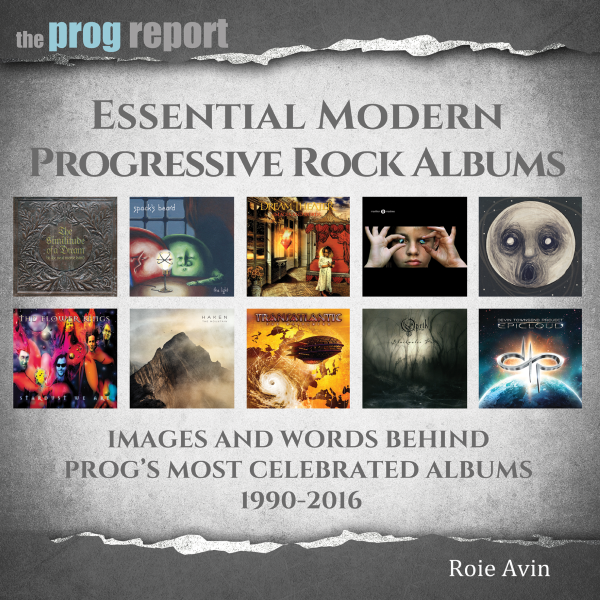 Earlier this summer, a new book dedicated to the resurgence of one of music's most enduring and underrated genres was announced from The Prog Report. Essential Modern Progressive Rock Albums: Images and Words Behind Prog’s Most Celebrated Albums 1990-2016, authored by Prog Report editor Roie Avin, is the first book to shine a light exclusively on the important albums of the modern progressive rock era. This new book showcases more than 50 albums from the last quarter century of prog, with each chapter dedicated to one album.

Featuring full color images of the artists live, original press photos and brilliant album cover art, this 280+ page, soft cover coffee table book will be one every prog fan will want to display proudly as a badge of their fandom.

The book, out in late November, is now available for preorder only at: http://progreport.com/essential-modern-prog-rock-albums/

Preorders come with a download of a chapter from the book on Transatlantic’s The Whirlwind.

Highlighted in the book are prolific and pioneering artists such as Dream Theater, Porcupine Tree, Opeth, Spock’s Beard, Marillion, The Flower Kings, Enchant, Fates Warning, Queensryche, and Big Big Train, along with more recent bands like Haken, Karnivool, Riverside, Between the Buried and Me, and The Dear Hunter, among the more than 30 bands included. Drawing on original interviews with band members such as Mike Portnoy, Neal Morse, Steven Wilson, John Petrucci, Mikael Åkerfeldt, Roine Stolt, Pete Trewavas, Ross Jennings, and dozens more, the book offers an in-depth look at the stories behind the albums that shaped the next wave of progressive rock. This book focuses solely on bands that carried the mantle of the genre's initial '70s explosion, artists that expanded the genre further, incorporating new sounds and elements to reach new audiences worldwide.

“The last 25+ years have been an incredibly fruitful period for progressive music, as this books indicates. The albums chosen here represent some of the most exciting music created in the modern progressive period, and it's only right that they claim their moment in the spotlight.” - Jerry Ewing, Prog Magazine

“There certainly was a period when the majority of bands of the New Prog generation, whilst more than competent, sounded just a bit too derivative of the their first generation idols. But Roie Avin's book goes some way to establish the credentials of the more recent Neo-Prog bands as having a far more individual and original voice whether it be the virtuosity of Dream Theater, the creativity and appeal of Big Big Train, or the highly impressive path carved out by Steven Wilson firstly with Porcupine Tree and latterly, in his own right.” - Anthony Phillips, Genesis founding member and guitarist

“This looks to be an amazing book and a MUST HAVE for Prog fans!” - Mike Portnoy

Teaser video that was released in July: https://www.youtube.com/watch?v=CuamlgOsIOI