Way back in 2013, we reviewed the original iRig Keys, and that portable, mini-37-key MIDI controller proved to be very useful in our travels between the East and West coasts (which this reviewer often does). The next generation of IK Multimedia's universal MIDI controller has upped the ante, not only by offering more, full-sized keys (25 or 49 keys as opposed to the original's smaller-sized 25- and 37-key options), but the controller now provides more knobs, sliders, and a built-in audio interface. There is a great deal to like in this compact package if it meets your particular mobile controller requirements.

The iRig Keys I/O version we reviewed was the 49-key version, and we were impressed by its compactness—despite having 49 full-sized keys. The plastic keys did not feel flimsy to the touch, which is a complaint we have with some of the other compact controller products on the market. All controls are above the keys, minimizing width, but it hardly adds to the depth either! There are two touch sliders, two up/down touch selectors, four touch surface buttons, a three-digit LED, five rotary encoder knobs, and eight pads. Multicolor LEDs add a nice touch to see your relative values on the controls and pads. Of note, one of the touch buttons is an “alt” button, meaning that it will give the other controls a secondary function.

Ports on the back include a power switch (you can choose USB power or battery power from four AA batteries, as well as a not-included AC adaptor), headphone jack, quarter-inch L/R output jacks, a Gain switch, a pedal jack, and an input jack that is a combined XLR/quarter-inch jack with a switchable phantom power button.

Of note, the audio interface is explicitly a one-in-two-out interface, with fidelity up to 96k at 24-bit. Sadly, there is no MIDI port or even a mini USB port, but rather IK Multimedia's now-familiar, small DIN Device port, facilitating the use of different cables (i.e., USB to a computer, Lightning to an iOS device, etc.). The cables are very short, which is a little annoying, frankly. We used a USB extender to run from the included cable to our computer—otherwise, it would not have reached! This setup worked fine. Of note, included in the box is a stand that clips onto the iRig keys that enables you to place your iPad on top. It looks like this: 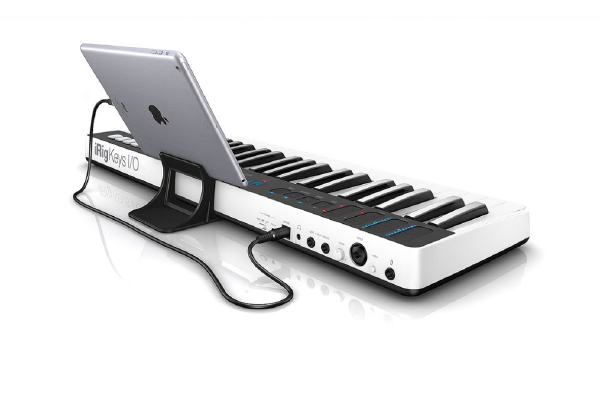 The iRig Keys I/O is a class-compliant MIDI controller and audio interface, so it requires no setup on Mac OS or iOS devices. We didn't test, but apparently on Windows 7/8 computers you'll need ASIO4ALL for the audio interface to function properly. This setup is not needed for Windows 10. Once registered, you'll get access to several downloads comprising the full version of SampleTank 3, the orchestral, SampleTank-powered, Miroslav Philharmonik 2 CE, Ableton Live 9 Lite, and Syntronik Pro-V. A very nice touch is that you get versions for both mobile devices/tablets/phones and your computer!

Additionally, on computers, you get the T-Racks 4 Deluxe mix and mastering suite plug-in. The other interesting software you get is a Logic/GarageBand controller plug-in, which similar to other manufacturers (i.e., Arturia, Native Instruments), gives you easy preset mapping for primarily IK Multimedia software. As we often say, we only wish there were built-in templates for Pro Tools, though it certainly works fine as a generic controller.

One thing we did find to be cool was that there are presets to help you with MIDI controls. There are five factory maps and 99 available user pages. Each preset can store completely different MIDI functions for nearly every button, knob, slider and pad on the surface. All presets can be recalled in a multi-step process via the data wheel, but there's also a fast recall option using the drum pads. Preset 1 is set up, for example, to work with IK Multimedia software, speeding up the process of patch browsing. Unfortunately, though, there's no software editor, so you'll be relying on the plugin's MIDI Learn feature to function in many cases.

IK Multimedia iRig Keys I/O sells for $299, which is quite a good deal considering you are getting 49 full-size keys, an audio interface, and some great software worth more than the cost of the keyboard. Overall, there's a lot to like, including integration with IK Multimedia software, and the ability to program custom templates. iRig Keys I/O is a solid performer with good usability on multiple platforms, and certainly worth checking out if you need a super-compact-yet-featureful controller.