--The Video Is Dedicated To Police Officers and First Responders Around The World Who Put Their Lives On The Line Every Day, Amongst Them A Hometown Hero Of The Band – Fallen Army Veteran and Las Vegas Police Officer--Charleston Hartfield--Who Lost His Life In The 2017 Las Vegas Mass Shooting Using His Own Body To Shield and Save Others From the Hail of Bullets--

FIVE FINGER DEATH PUNCH have released the clip of their new song “When The Seasons Change” today, Friday, September 14 (ET). Written by FIVE FINGER DEATH PUNCH guitarist ZOLTAN BATHORY, the video is dedicated to those Police Officers and First Responders around the world who selflessly put their lives on the line every day. Amongst them a hometown hero of the band--fallen Army Veteran and Las Vegas Police Officer--Charleston Hartfield--lost his life in the 2017 Las Vegas mass shooting using his own body to shield and save others from the hail of bullets. Watch the video for “When The Seasons Change” HERE.

When asked for a comment ZOLTAN BATHORY said: “Instead of giving you a typical quote about the music video, let me give you some data to ponder…Medical malpractice is the 3rd leading cause of death in the USA right behind heart disease and cancer. Some research says an average of 250,000 people die every year because of medical errors. In contrast, Police Officers make an average of 50 fatal errors annually, that’s 245,950 less - and most of them are due to split-second decisions in high-risk situations. Of course, loss of life is always tragic but we don’t put all medical professionals on blast or call them names, disrespect them and demonize them. Of course not. They’re doing their best and it would be just as ridiculous as the current, grossly unfair rhetoric against Police as a whole.”

A rare voice of support in the entertainment world, FIVE FINGER DEATH PUNCH have been longtime supporters of veteran and law enforcement entities. Just this week the group again made good on this promise and donated a portion of the ticket sales from their massive summer North American Outdoor Amphitheater Tour equaling $95,000 to C.O.P.S - Concerns Of Police Survivors--whose mission is rebuilding shattered lives of survivors and co-workers affected by line of duty deaths, through partnerships with law enforcement and the community.

Due to fan-demand, FIVE FINGER DEATH PUNCH and BREAKING BENJAMIN announced an expansion of this summer’s most-successful co-headlining North American Outdoor Amphitheater tour with additional dates that take both bands through Fall 2018 in Arenas. Co-produced by Live Nation and Frank Productions, the tour featured special guests Nothing More and Bad Wolves on the summer leg. On the Fall leg, global 2018 breakout rock band Bad Wolves will once again join the trek on select dates and Swedish heavyweights In Flames on other select shows. Chart toppers From Ashes To New will be supported on all fall dates. The artists on the tour are also dominating the rock charts with their most current singles: Five Finger Death Punch at #1 last week with “Sham Pain,” Breaking Benjamin at #3 with “Torn In Two,” Nothing More at #8 with “Just Say When,” Bad Wolves at #9 with “Hear Me Now (feat. DIAMANTE),” and From Ashes To New coming off a #2 hit. For tickets to the biggest rock event of the year, VIP offerings and more info, visit here and here.

After a three-year wait, the multi-platinum group exploded onto the album charts earlier this summer with their seventh studio album AND JUSTICE FOR NONE (via Prospect Park), which is now the #4 best-selling hard music album of 2018. AND JUSTICE FOR NONE has generated 170 million U.S. on-demand streams and over 300,000 U.S. digital song sales. At 15 weeks, AND JUSTICE FOR NONE has surpassed all 2018 hard music albums that preceded it in terms of commercial volume--on-demand and programmed streams, digital song sales and album sales. In the U.S. alone, FIVE FINGER DEATH PUNCH have sold over 4.3 million albums, over 9.7 million digital songs and generated just under 2 billion streams. The new single and video for “Sham Pain,” which hit #1 hit at Active Rock last week, marked the 6th #1 radio hit for the band. The first single “Gone Away,” went to Top 5. AND JUSTICE FOR NONE also marked the group’s fifth consecutive Top 5 album release. The album also had four #1 placements on other charts including: Top Digital Albums, Top Rock Albums, Top Hard Music Albums and AND JUSTICE FOR NONE is the #1 streaming Hard Rock/Heavy Metal Album of 2018. Purchase AND JUSTICE FOR NONE or stream the album here:https://fivefingerdeathpunch.com.

2018 marked the beginning of a new chapter in the history of FIVE FINGER DEATH PUNCH who overcame a well-documented legal battle with their label alongside a near break-up only to defy the odds and to come back together stronger than ever on AND JUSTICE FOR NONE. On AND JUSTICE FOR NONE, the band--IVAN MOODY (vocals), ZOLTAN BATHORY (guitar), JEREMY SPENCER (drums),JASON HOOK (guitar) and CHRIS KAEL (bass)--re-teamed with longtime producer Kevin Churko (Ozzy Osbourne, Disturbed) and once again stepped up their game maintaining their signature intensity, all while pushing themselves into new territories. 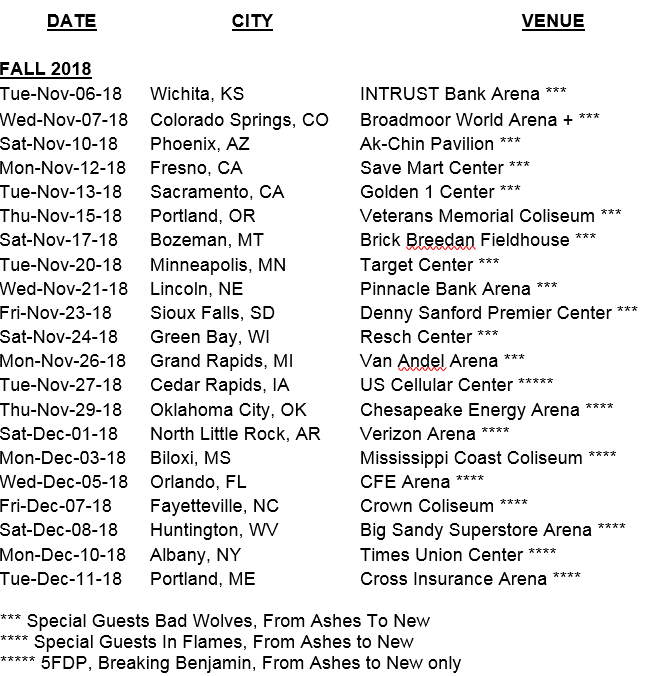 About Five Finger Death Punch
Confidently leading heavy music in the 21st century, Five Finger Death Punch continue to make the impossible a reality at every turn. Since their emergence in 2007, the hard rock band has achieved six consecutive RIAA Gold-certified albums, three of which have gone Platinum since, as well as a Platinum single culminating in their 2015 #1 album GOT YOUR SIX, while at the same time being one of the top rock streaming acts with over 2 billion global streams to date. In 2016, the band also received the prestigious “Soldier Appreciation Award” from The Association of The United States Army. 5FDP frequently play all major festivals globally from Download to Rock Am Ring to Rock on the Range and sell out arenas around the world to countless screaming “Knuckleheads.” Their 2017 Greatest Hits album A DECADE OF DESTRUCTION, featured 14 of their 20 top 10 singles – and both new tracks “Gone Away” and “Trouble” also became top 10 singles – making it a self-fulfilling prophecy. 5FDP’s seventh full-length album, AND JUSTICE FOR NONE was released on May 18, 2018 and marked the group’s fifth consecutive Top 5 debut album. The band just concluded this summer’s most-successful North American Outdoor Amphitheater Rock Tour with Breaking Benjamin and announced an expansion of the tour which will graduate to Arenas this fall. 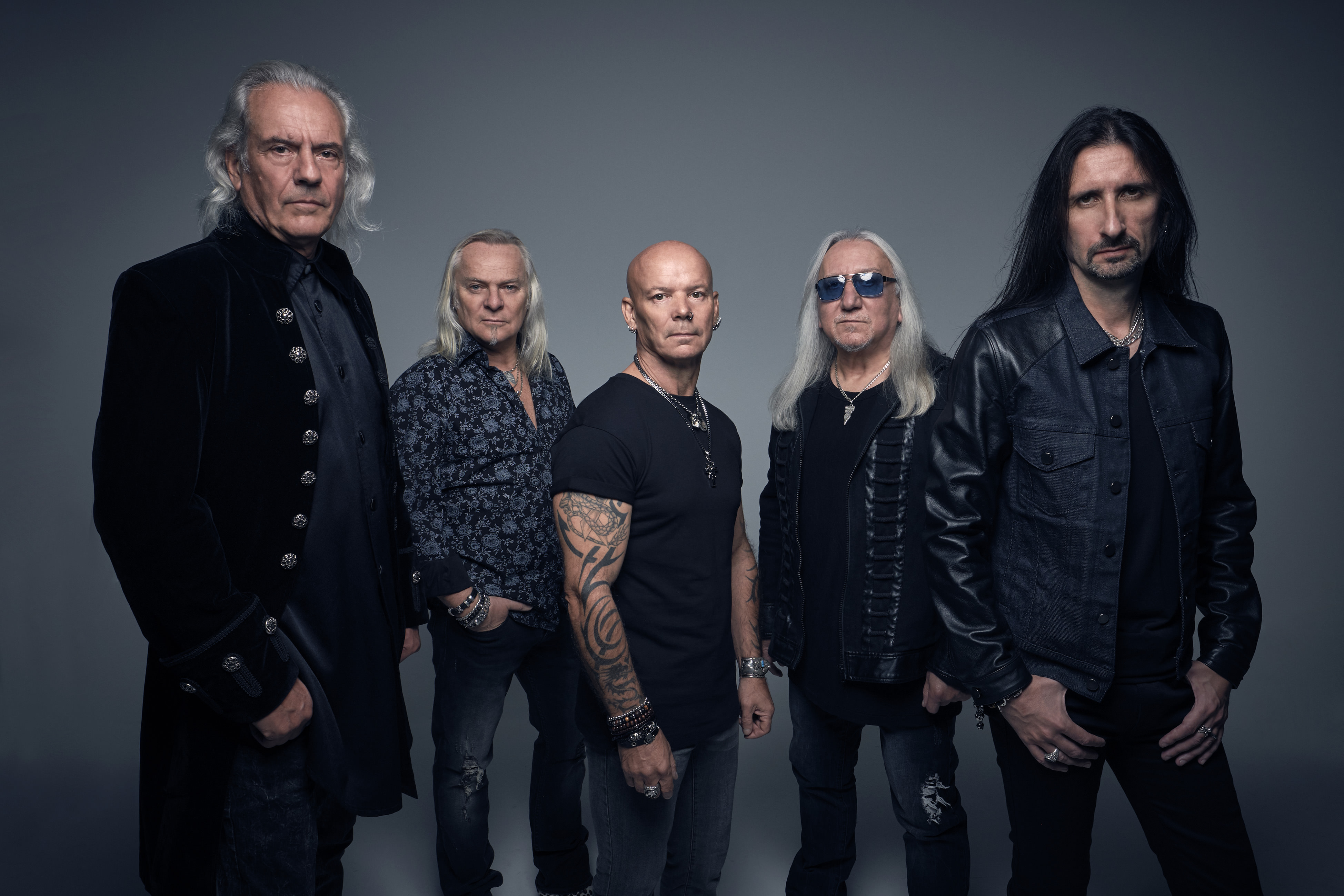