Last month, Slash ft. Myles Kennedy And The Conspirators--Slash (guitars), Myles Kennedy (lead vocals), Todd Kerns (bass), Brent Fitz (drums) and Frank Sidoris (rhythm guitar) called out to fans to help create their new live music video at the band’s electrifying two-hour show on the final date of their sold-out fall U.S. headlining tour at the Palladium in Hollywood. Fans shot live footage of the concert via the Cinebody app which was assembled by director and editor Clifton Collins to create the final video.

Watch and share the brand-new video for the song “Mind Your Manners” out today HERE.

"It was great to involve the fans to make this video,” says Slash. “They did an awesome job! Having Clifton shoot as well as edit it all together was just perfect."

Loudwire hailed “Mind Your Manners”--from the band’s new album LIVING THE DREAM--as “the album’s most infectious rock single” while Rolling Stone described the new song “The guitarist alternates between ragged power chords and squealing solos throughout the song; on the chorus, Kennedy layers his voice into stacked harmonies.”

Slash ft. Myles Kennedy And The Conspirators will continue touring worldwide in support of their acclaimed new album LIVING THE DREAM which spawned the first single, “Driving Rain,” and is officially a Top 5 hit at Rock Radio. In January 2019, the group head to Japan and will continue tours through New Zealand, Australia, Europe and the U.K. including performances high profile festivals such as Rock Am Ring and Download Festival. Expect more tours for 2019 to be announced soon, all current shows are listed below.

LIVING THE DREAM (Snakepit Records/RoadRunner Records) is the third full-length offering from Slash ft. Myles Kennedy And The Conspirators. The Los Angeles Times described the album as, “his best work since the demise of Velvet Revolver. …full of “unexpected funk, boogie, blues and garage rock influences.” While Rolling Stone declared the album, “a biting blues filigree at the end of a riff, weeping solos full of long notes, boogie-woogie riffs.” Elsewhere, Classic Rock hailed, “the bands third and Best Album, ‘The Great Pretender’ is the album’s masterpiece and one of the best things Slash has ever done.” Fans can purchase or stream LIVING THE DREAM HERE. Fueled by the Top 5rock song “Driving Rain,” its live-action, animated video as well as the best critical acclaim of their career, LIVING THE DREAM debuted with 10, Top 10 chart placements around the world. The first single “Driving Rain” which jumped to #5 this week and climbing--marks the band’s 6th consecutive, Top 10 single at radio and Slash’s fastest-rising single ever in his solo career.

Catch Slash ft. Myles Kennedy And The Conspirators on the LIVING THE DREAM WORLD TOUR 2019: 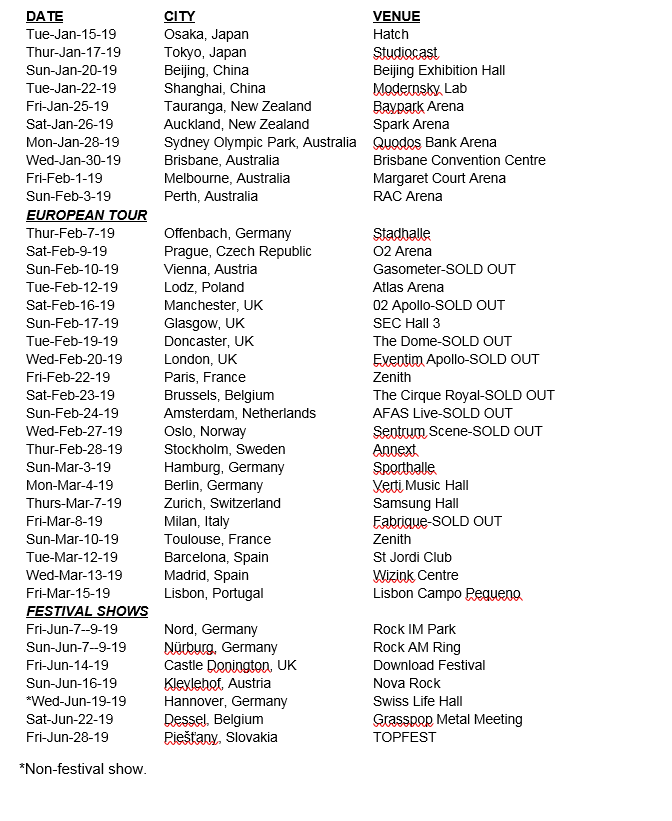 For more information on Slash ft. Myles Kennedy And The Conspirators, visit: