REMAGEN, GERMANY: Having turned heads and opened ears at The 2018 NAMM Show with its innovative Quantum Synthesizer flagship, this time high-quality synthesizer developer Waldorf Music makes a return trip to announce an upcoming update to the Quantum Synthesizer’s firmware, focused around a new synthesis capability created in close collaboration with fellow German company Vision 4 Instruments — itself a new and exciting venture, providing future-facing hard- and software platforms for electronic musical instruments — at The 2019 NAMM Show, January 24-27, in Anaheim, California…

So what, exactly is Kernel synthesis? Simply speaking, it is a modular approach in which up to six audio kernels can be freely combined into a single oscillator. Effectively, each kernel is an oscillator in its own right, realising a whole range of timbres — from using sine and classic waveforms via wavetables through to samples and noise. For example, users could combine three wavetables with a sample, a sine wave, and noise within a single Quantum Synthesizer oscillator.

On top of that, the kernels could modulate each other in audio rate using a variety of modulation methods, such as amplitude, frequency, phase, and ring modulation. Phase Distortion is also possible alongside unusual processes like audio rate wavetable- position modulation. Moreover, each kernel, of course, could also add self-modulation like classic FM feedback.

Meanwhile, kernel pitch can be set in relation to note pitch, as well as being set to fixed frequency in audio or LFO range. Pitch envelopes could be also applied to each kernel individually using the Quantum Synthesizer’s Modulation Matrix.

It is perfectly possible, then, to view Kernel synthesis as an oscillator construction kit, allowing for traditional approaches like a six- operator FM synth, as well as providing an experimental space for future-facing synthesis techniques.

To put this all into its rightful perspective, users could quickly start by using predefined kernel oscillator patches using the Quantum Synthesizer’s oscillator preset system, then continue to create a library of their own oscillator models. 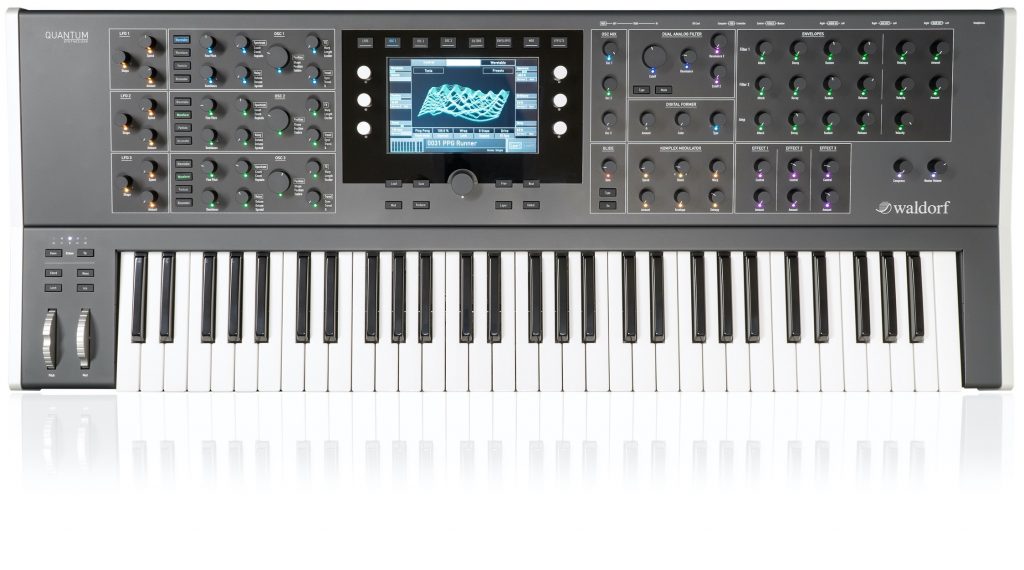 The latest (version 2.0) free firmware for the flagship Quantum Synthesizer will start beta testing after The 2019 NAMM Show, January 24-27, in Anaheim, California, where Waldorf Music will be represented by Korg USA on Booth 8802.

The well-known Waldorf Music moniker has been synonymous with high-quality synthesizers for 30 years; indeed, its innovative position in the electronic musical instruments marketplace dates back to 1989 with the release of the wavetable synthesis-based Microwave.This extraordinary reincarnation of the legendary PPG Wave series — arguably amongst the most coveted high-end synthesizers of the early Eighties — was instrumental in bringing the dominance of Japanese and American synthesizers to an end.Waldorf continued this unique technology tradition with successive synthesizer releases ranging from the mighty Wave — perhaps the most impressive, expressive, and user-friendly sound synthesis tool ever built — to raising the bar for VA (Virtual Analogue) synthesizers with the introduction of the popular Q series from 1999 onwards.The new millennium saw the trailblazing company making a timely move into the brave new world of music software with the release of its first VST Instrument, PPG Wave 2.V, a tradition it continues to this day with more recent software releases including its Nave advanced wavetable synthesizer. Subsequent successes in the high-quality hardware arena include the Blofeld synthesizer — forging sound and design into an unbeatable price/performance ratio in both desktop and keyboard versions — and Zarenbourg, a contemporary electric piano par excellence, as well as the cost-conscious Rocket (synthesizer), 2-Pole (analogue filter), and Streichfett (string synthesizer) desktop modules. Meanwhile,Waldorf broadened its appeal further still by introducing Nave to transform any iPad into an advanced wavetable synthesizer. 2019 (and beyond) sees a slew of new high-quality synthesizers set to take the Waldorf name to the hands-on musical masses, whether working with its recently-released Quantum high-class hybrid synthesizer flagship or other hardware (including a welcomed move into the popular Eurorack modular synth system format) or software (including iOS).