GRENOBLE, FRANCE: virtual instrument- and effect plug-in-specialising software company XILS-lab is proud to announce availability of XILS 201 — following in the virtual (instrument) footsteps of its XILS 505 paraphonic string machine exacting emulation (earlier this year) as another ‘numeric namesake’ plug-in par excellence, this time inspired by a certain headphone- and microphone-manufacturing German giant’s sensational Seventies-vintage VSM 201 Vocoder, an ultra-rare (and ultra-pricey) sound effect device designed to take the human voice into the electronic sound world, widely appropriated by German techno-pop trailblazers Kraftwerk (throughout The Man Machine album in 1978, including its classic cut ‘The Robots’) and also (some say) voicing the Cylon robot race in that same year’s Battlestar Galactica TV series amongst other notable users and uses of the time, including influential American jazz keyboardist Herbie Hancock, before being given a new lease of life by French electronic music duo Daft Punk (on 2013’s chart-topping Random Access Memories long-player, playfully rebooting late-Seventies and early-Eighties American music), and now realistically rebooted itself in software (at a much more realistic price) by its fellow French creators — as of July 2…

An appreciation of its iconic inspiration is virtually vital to truly appreciating the excellence of XILS 201, XILS-lab’s vocoder and vintage multi-effect plug-in par excellence, so stepping, briefly, back in time is inevitably of historical help. Let lessons begin: Vocoder — a portmanteau of voice and encoder — is a category of voice codec that analyses and synthesizes the human voice signal, invented in 1938 as a means of synthesizing human speech by Bell Labs’ Homer Dudley, whose work was developed into the channel vocoder for telecommunication transmission purposes, permitting speech transmission with very low bandwidth that results in somewhat distorted yet intelligible speech. Subsequently applied to musical signals, the results sound more or less like robotic speech or singing — think Teutonic techno-pop trailblazers Kraftwerk’s 1978 classic cut ‘The Robots’ (from The Man Machine album) and ‘Autobahn’ (a surprise international hit as a radio edit of the title track from the 1974 album).

And following the burgeoning breakthrough of electronic instruments, a certain headphone- and microphone-manufacturing German giant sought to take the human voice into that wonderful world of electronic sound with its VSM 201 Vocoder in 1978. Bolstered by several SPEECH AND SIGNAL INPUTS and REPLACEMENT SOUND INPUTS intelligibly indicated on its 470 x 260 mm front panel, this hopeful machine made musical sense in vocoder terminology, taking a carrier sound — synth waveform or any other sound containing sufficient harmonics — and articulating that sound with the human voice, much in the same way as a mouth articulates the sound coming from vocal cords, by detecting frequencies in the voice section and opening the corresponding frequencies in the carrier section. Since the VSM 201 Vocoder featured 20 frequency bands spanning a 100 Hz to 8000 Hz spectral range — remembering the more bands used, the better the resulting effect — it sounded sensational. Indeed, its creator succeeded in taking one of the original 12 units to Kraftwerk’s Kling-Klang studio in Düsseldorf — despite commanding a five-figure price tag — in time to make an appearance throughout The Man Machine album, but barely made it into double-digit sales figure territory thereafter. The sensational-sounding VSM 201 Vocoder was destined to remain ultra-rare and ultra-pricey, as evidenced when Kraftwerk’s musically-modified example — custom-controllable by an external Telefunken 16-band MIDI-to-CV/gate unit for live performance purposes — showed up on an UK online auction site with a starting price of £8,214.00 GPB (plus 21% VAT for European Community-residing bidders) almost 40 years later! Little wonder, then, that XILS-lab set its inventive software sights on accomplishing an exacting emulation since the Seventies-vintage VSM 201 Vocoder still sounds sensational today, thanks to its unsurpassed intelligibility, while the few surviving examples clearly command sky-high prices.

Put it this way: with the much more realistically priced XILS 201 vocoder and vintage multi-effect plug-in, anyone can effectively buy in to the ‘missing link’ between the likes of Kraftwerk and its vocoder-voiced Cylon contemporaries in the original Battlestar Galactica TV series and, appropriately, French electronic music duo Daft Punk. Putting XILS 201 into its rightful context in its user manual, XILS-lab extols its virtual virtues as follows: “XILS 201 is a virtual effect based on the architecture of one of the coolest vintage vocoders out there. One of the best vocoders ever created, XILS 201 can take you back in time to when sound was so important for the great artists who started the electronic music revolution, such as Kraftwerk, Herbie Hancock, and others.”

On the face of it, XILS 201 looks the part, paying homage to the sensational Seventies-vintage VSM 201 Vocoder’s distinctive appearance — all the way through to replicating its tolex-covered casing and convenient carry handle, albeit only onscreen courtesy of a photo-realistic GUI (Graphical User Interface)! It also accomplishes XILS-lab’s stated goal of being true to the original in sound and adding features that were just not previously possible. Fanciful features worth highlighting include its two (VARIABLE CHANNEL EMPHASIS and SPEECH ADDITION/MULTIFILTER) filter banks, each offering 20 frequency bands and capable of processing the incoming signal — voice or any other signal, such as drums — or carrier signal; the inbuilt (modelled) analogue SYNTH can be used as a carrier, immediately imparting XILS 201 with its characteristic (and readily recognisable) sound — as can any other incoming signal, such as an external synthesizer or another voice; the exotic-sounding SILENCE BRIDGING section hosts a multi-band frequency-dependent envelope follower engine that shapes the signal gain according to its harmonic content — very useful for processing percussive or rhythmic sonic material, or adding a contour to the sound. Saying that, ‘internal circuitry’ parameters that were not available on the original hardware unit have been effectively exposed, making it more versatile and powerful, with several vintage analogue-modelled effects — CHORUS, DELAY, and PHASER — and an early ‘digital’ REVERB also added with custom-configurable routing and order options.

One relatively straightforward scenario when working with a DAW (Digital Audio Workstation) would be to record a voice — not necessarily singing, then choose the XILS 201’s inbuilt SYNTH as the carrier and send MIDI (Musical Instrument Digital Interface) notes to that carrier to make the voice ‘sing’ those notes — or chords (since the synth engine itself is polyphonic)... et voilà! It is also perfectly possible to use XILS 201 more simply — as a filter bank/chorus/delay/phaser/reverb multi-effect plug- in. Try it on a Rhodes, Clavinet, or string machine patch to rediscover those once-coveted organic sounds that required a long chain of vintage effects. 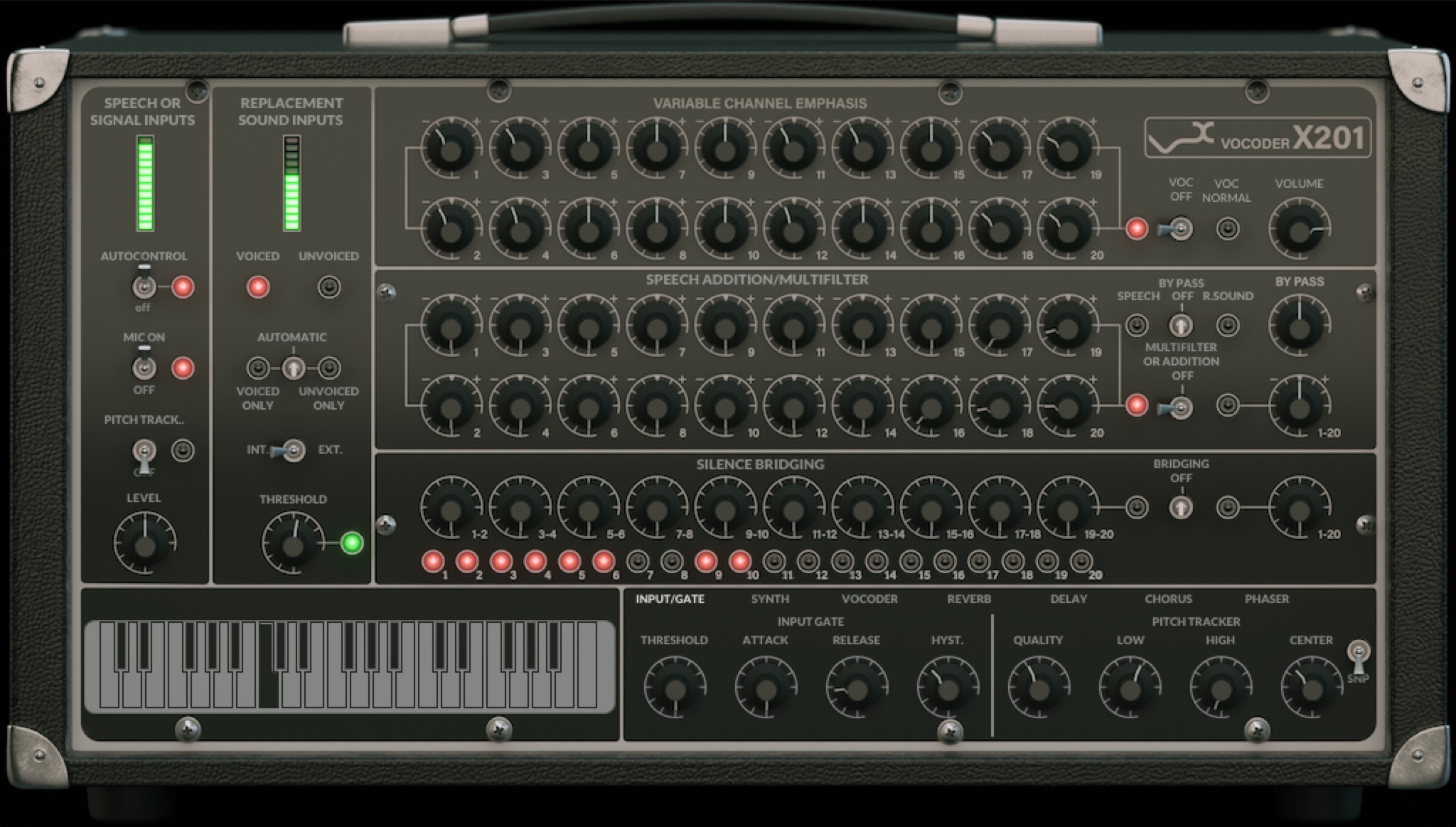 Sensational-sounding in its own right, XILS 201 is inherently musical — without necessarily needing to sound like a robot, though that, of course, can sound equally enticing, as ably demonstrated by Kraftwerk over 40 years ago during the burgeoning breakthrough of electronic instruments... back when men were machines!

XILS 201 is also available as part of the Analog Vocoders bundle together with XILS 5000 (as exacting emulations of two of the finest vocoders ever created, available as a single license) at an introductory promo price of €119.00 EUR until July 31, 2020 — rising thereafter to an MSRP of €199.00 EUR — from XILS-lab here: https://www.xils-lab.com/products/analog-vocoders-bundle-p-166.html

Note that owners of XILS 5000 can upgrade to the Analog String Machines bundle at an introductory promo price of €39.00 EUR until July 31, 2020 — rising thereafter to an MSRP of €59.00 EUR — from XILS-lab here: https://www.xils-lab.com/products/analog-vocoders-bundle-upgrade-p-167.html

Based in Grenoble, France, XILS-lab is an audio software company, created, and managed by Xavier Oudin. Having created some of the best known virtual instruments and effects plug-ins on the market for various companies over the last 20 years, today he focuses on bringing his passion for audio, instruments, and music to bear on his own company.Working with highly-skilled professional musicians and sound designers, the company collectively believes that a virtual instrument or effect is not simply a series of mind-boggling mathematical algorithms designed and scrutinised over by bookish PhD engineers but rather a useful and useable musical tool made for musicians. Moreover, XILS-lab loves to create virtual instruments and effects that inspire its users to create more imaginative music than they ever dreamed possible! 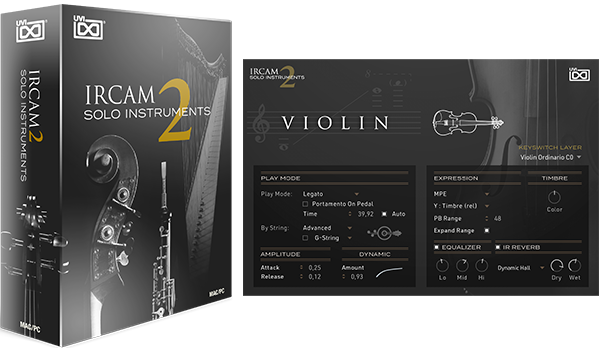