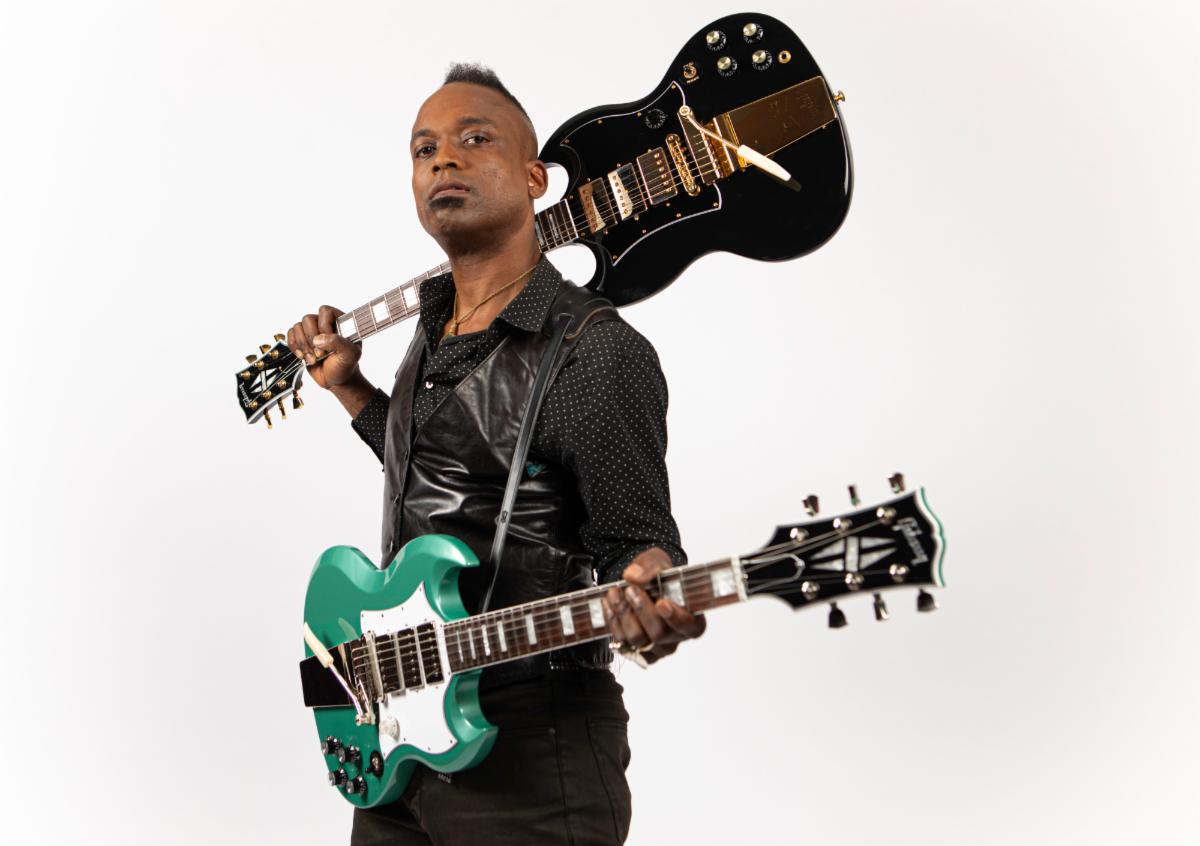 “What I love about the Gibson SG is I am able to get my Les Paul tones and I’m able to get the single coil pickup tones, this guitar is extremely versatile, and by utilizing the pull up feature on each volume knob you can get a lot of tones,” says Kirk Douglas. “I find with the SG you are able to get a lot of different musical colors, all out of this one guitar.”

“Captain Kirk Douglas is a talented vocalist, guitarist, all-around musician, and Gibson Alliance member who has taken a classic design such as the Gibson SG, and modified it with modern concepts that fit his playing style,” says Cesar Gueikian of Gibson. “It’s been an incredible journey for us and this guitar is a perfect example of how we put the Gibson Innovation Lab to work in service of our artists and the outcome in this case is pretty epic; we are all in love with this new signature SG.” 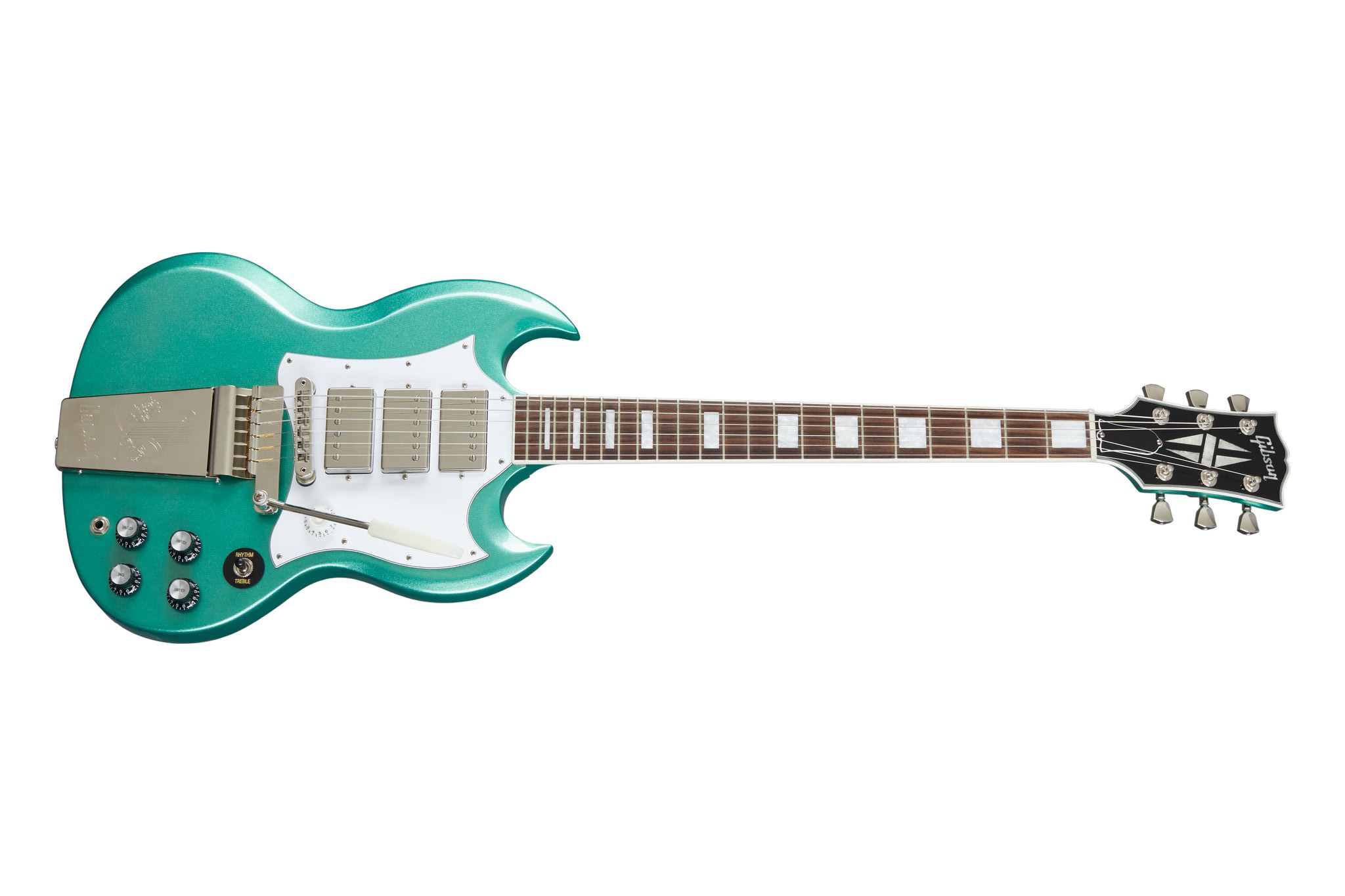 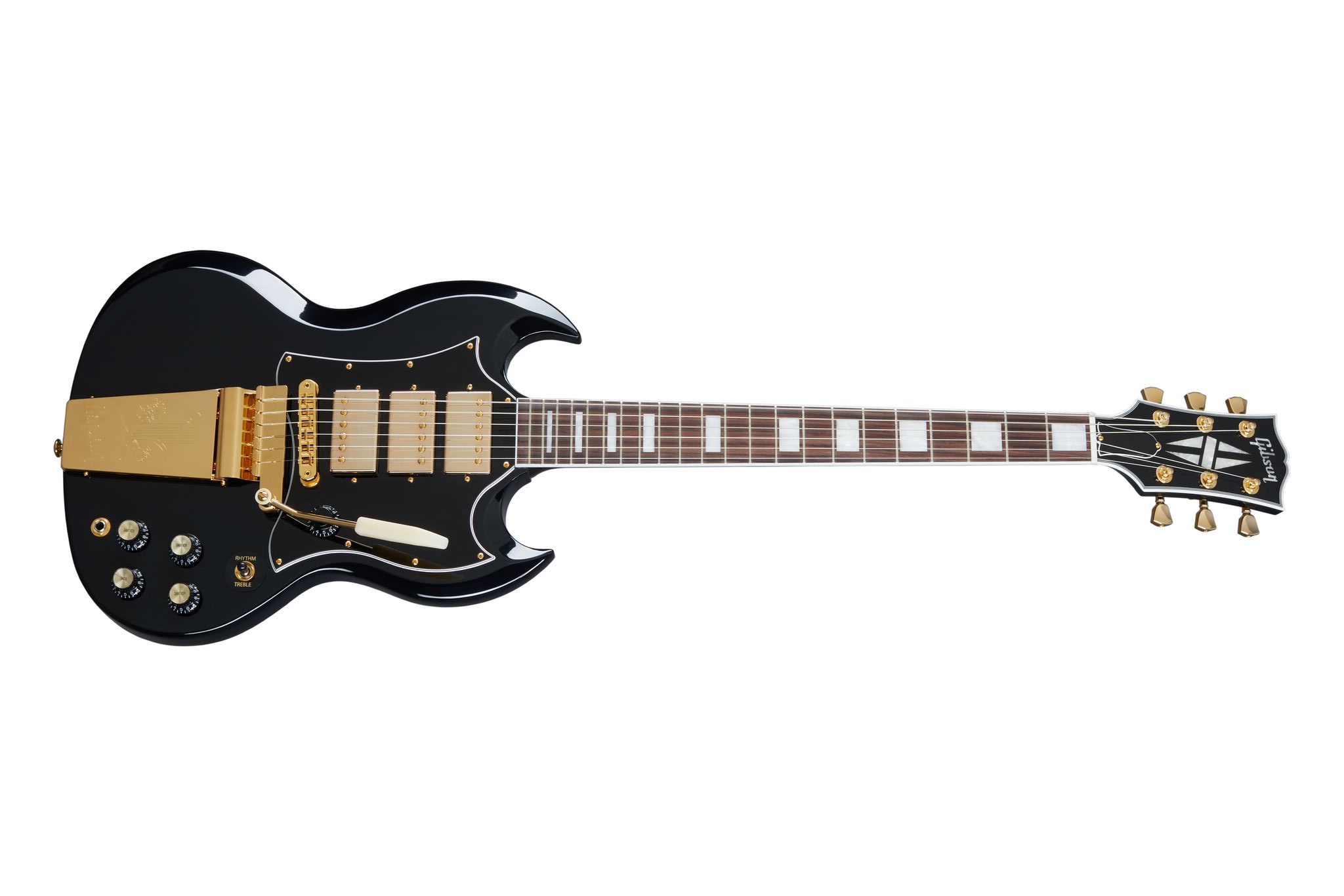 Above: the new Gibson Captain Kirk Douglas SG in Inverness Green and Ebony.

As the guitarist for The Roots, the beloved house band for Late Night with Jimmy Fallon on NBC, Captain Kirk Douglas has developed a well-earned reputation as a stellar player. His guitar collection includes several Gibson models, but arguably the best is his three-pickup Gibson™ SG™ Custom, which is now commemorated in the new Kirk Douglas signature SG from Gibson USA. The guitar features non-locking Keystone tuners, a mahogany neck and body, rosewood fretboard with 22 medium jumbo frets and large block acrylic inlays, a Graph Tech® nut, ABR-1 Tune-O-Matic™ bridge and Kirk Douglas signature "Captain" Lyre Tail Vibrola tailpiece, black Top Hat knobs with metal inserts, and three BurstBucker™ humbucking pickups. Like the Captain himself, the pickups and controls on his SG are incredibly versatile. On a basic level, they operate somewhat similarly to a two-pickup SG, but with significant added capabilities. The three-way toggle switch selects the bridge pickup, neck pickup, or both. Each of these pickups has its own volume control, and each is equipped with a push/pull pot that switches from humbucker to single coil when the switch is pulled out. A single master tone knob located in the usual lead tone control position, is provided, and where you’d normally expect to find the second tone control, an additional volume control (again, with a push/pull switch for coil tapping) is installed. This controls the middle pickup and can be used to blend its signal in with the other (one or two) pickups, regardless of how the three-way pickup selector switch is positioned. This means you can run the neck and/or bridge pickups alone or together, the neck and middle, bridge and middle, or all three pickups simultaneously, and at any relative volume amounts desired. Even better--once you have dialed up the exact balance you want, you can adjust the overall output level of the entire guitar with the pickguard-mounted master volume control.

Watch and share the interview below as Kirk Douglas talks about his music influences and the creation of his new Gibson Kirk Douglas SG HERE:

Captain Kirk Douglas fell in love with the guitar before he even had the chance to hold one. "There was a music store in the town where I grew up called Family Melody,” says Kirk Douglas. “I used to just gaze at the different guitars they had in there. Being able to hold one and try to play one felt so out of reach for me." Growing up in a Jamaican household on Long Island proved to be an inspiring atmosphere for a kid fascinated by music. "My parents would play reggae classics of the day, alongside melodic ballads by the Commodores and Bee Gees. Sunday mornings would always be Bach and Handel playing. But at school from 8am to 3pm it was a world dominated by Rock and Roll. KISS, Van Halen, Ozzy were in heavy rotation at the time. I soaked it all in from home and school. When my parents broke down and got me an electric guitar (a one pickup baby strat from a company called Memphis) my world was never the same." By the time his teens rolled around Kirk’s tastes grew to appreciate Motown and Zeppelin. Then Living Colour and Fishbone and then bands like the Smiths and the Cure. All while trying to figure out how to get the guitar to make the sounds and songs like the bands mentioned.

After moving into New York City, Kirk made connections with fellow musicians and found himself playing with over 10 bands at one time, which provided Kirk’s biggest musical education. Playing with a wide array of musicians of various styles and approaches this led to a few chance meetings with the Roots. After being recommended to them by many sources Kirk auditioned for the band and got the gig that would alter the course of his life. Since joining the Roots, many dreams have been fulfilled including getting to tour the world playing music, playing guitar with his childhood musical heroes and recording an album of his own with his solo band Hundred Watt Heart. 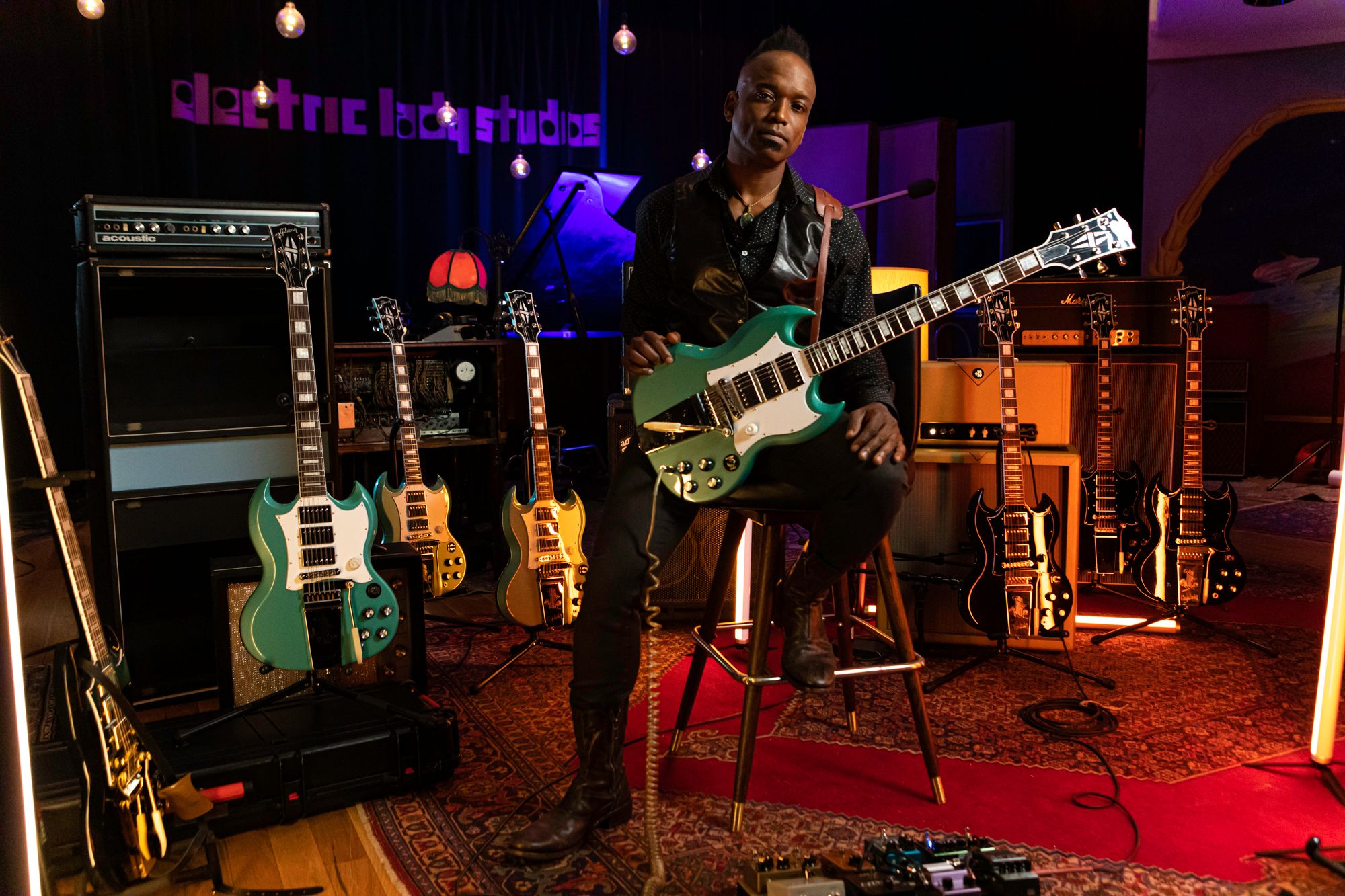 Kirk is currently in midst of making the follow up to his last album Turbulent Times, all while simultaneously playing with the Roots on the Tonight Show with Jimmy Fallon and working on what will be the next Roots album. "I feel extremely fortunate to have a place to channel the joy and frustration of the human experience,” explains Kirk Douglas. “Music has always given me that gift. A way of processing the world that just leaves me feeling better about life itself.”

Tune-in on Wednesday, February 20 at 6:30pm CT to watch a live interview with Kirk Douglas on Gibson TV, Facebook and Instagram. 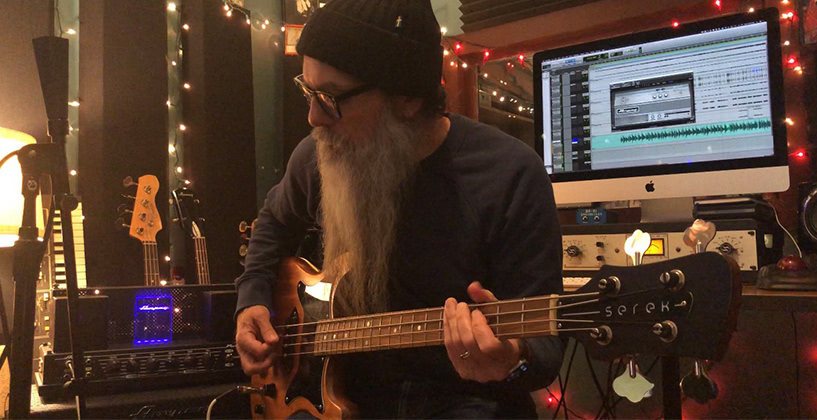 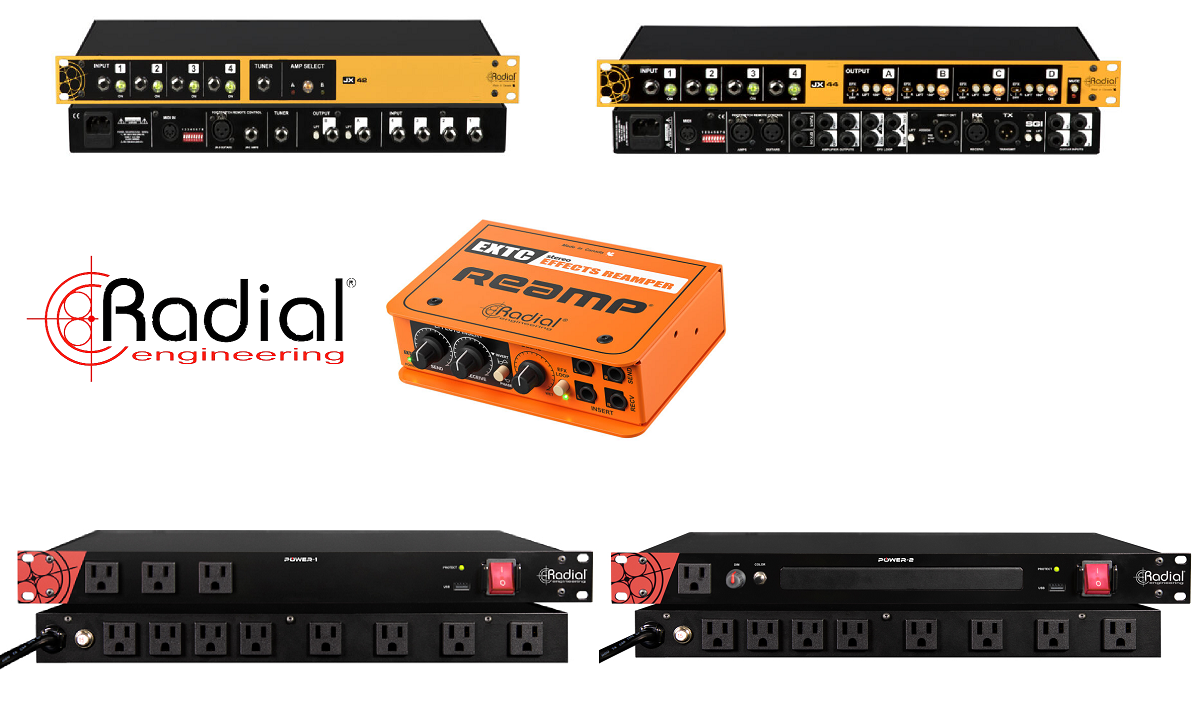