Taylor Guitars has been building many of the finest sounding acoustic guitars since 1974, revered by professionals for their brilliant and smooth tones, effortless playability, and outstanding woodwork. Acoustic guitars, by very nature, rely heavily on construction technique and quality of their tone woods to either sonically sink or swim, and these are certainly hallmarks of the brand.

In a bold move, Taylor has revamped the 600 Series, revising both features as well as construction techniques in what is certainly one of their most widely played lines. We got our hands on the new Taylor 614CE and put it through its paces on a studio recording session, at full band rehearsals, and on the big stage with a popular tribute band. Everyone who played or listened to the new Taylor 614CE loved it. But first, we insist you love our review.

Taylor’s 614CE features their most popular body shape, the Grand Auditorium. Being Taylor’s middle-of-the-range model in terms of body size, it is their most versatile offering. The body’s dimensions are 20” in length, 16” in width and 4 5/8th in depth. Players looking for the Swiss army knife in the product line will find it in the 614 series. The Grand Auditorium was designed to cater to flat pickers, singer songwriters, and finger-style alike.

The 614CE features a Sitka Spruce top that has been torrefied. What the heck is that, you ask? Torrefaction is a process through which Taylor essentially bakes the wood in an industrial oven, causing crystallization on a molecular level that normally happens within wood over many years. Truly, the tone is baked into the wood.

The back and sides of the 614CE are cut from maple. Maple, being known for a snappy, focused response has been re-voiced for 2015 in the 600 series guitars to give the instruments an increased frequency range, especially in the lows and low mids. Subtle but extremely effective building techniques such as new bracing and relief routs carved into the inside of the top help achieve this enhanced frequency response.

Taylor has finished the body of this guitar with what they call a hand rubbed, brown sugar stain (which makes us both hungry and want to play guitar, two of our favorite activities). This finish brings out the beauty in the maple that will give your best Brazilian rosewood a run for its money in the looks department. We couldn’t find specs on the grade of maple used, but our best guess is AAA or AAAA maple—it certainly wasn’t lacking on our test instrument.

Taylor describes the clear coat on the instrument as the thinnest in the industry. In the ‘90s, Taylor stopped using nitrocellulose lacquer because it wasn’t environmentally friendly, and, interestingly enough, for one of the reasons many guitarists like nitro: cold checking and yellowing. Good move, as we don’t want our prized (and pricey) acoustic beauty to show signs of age beyond the wear and tear we impart through decades of play. This move was more than merely cosmetic, however. Their polyester finish can be applied thinner (as little as three thousandths of an inch!) and therefore enhance resonance of the instrument. Hearing how remarkably this instrument sustains, we will trust their judgment on this.

Rounding out the body of the 614CE’s aesthetic appeal incudes a striped ebony pick guard and an ebony bridge. Even the bridge pins are ebony. The ebony on this guitar is black as night, aside from the pick guard. Darker ebony is far more desirable, and in a series of videos, Bob Taylor explains that only one tree out of ten contain this desirable wood, while the rest of the trees were left felled in the forest to rot! This practice has stopped, in large part thanks to Taylor’s conservation efforts, and they plan to use more striped ebony in the future. The rosette, although an anticlimactic single ring, features an intricate ebony/abalone/grained ivoroid construction. Elegant; not gaudy.

Taylor’s on-board electronics, the Expression System 2, has a host of refinements over its predecessor. Taylor has moved the pickup sensors from under the saddles to behind them, and they claim this will produce a less shill, less brittle sound compared with traditional Piezo pickup placement. The entire system is also 25% hotter than before. Plainly stated yet aesthetically blended volume and tone controls are logically found on the topside of the instrument. They’re blended so well, in fact, that it’s not immediately apparent this is an acoustic/electric! The ¼” input jack, as well as the battery compartment, are found on the lower strap button and aren’t immediately apparent, either. Taylor really minimizes just how much needs to be cut into their guitar bodies.

The guitars neck is hard rock maple and its width is 1¾”.  Typical neck construction hinges the fingerboard at the 14th fret, gluing the rest of the fingerboard to the body. Taylor Guitars in the 600 series (among others) feature the NT (new technology) neck, a bolt-on design which features a continuous piece of wood underneath the fingerboard all the way to the 19th fret (compared with typical acoustic instruments that only have solid wood up to the 14th fret, with the remainder of their fingerboards glued to the tops of the instruments). Taylor’s design assures a straighter neck that can withstand more movement as temperature and humidity vary, not to mention significantly more straightforward maintenance work.

The ebony fingerboard is a nice touch as well. Housing 20 frets and ebony binding, it rounded out the instrument nicely. The grained, ivoroid wings elegantly state your finger position on the guitar’s fret board. The 614CE also features a Tusq nut, which divides the ebony between the fingerboard and the headstock. The headstock overlay features an ebony veneer and the company’s logo. Six nickel-plated tuners complete the build, and our test guitar shipped in a deluxe case with a healthy dose of case candy. It can be hard to appreciate just how well built, musical and comfortable Taylor acoustic guitars are until you’ve played a number of other guitars and realized their inherent shortcomings. We constantly found ourselves thinking, “The Taylor doesn’t do that!” A lot of little things being right on a guitar adds up to a perfect score, and the Taylor 614CE delivered on all fronts. For instance, a perfect fretboard, perfect action, and meticulous fretwork yielded uninhibited playing. Every single note sounded without buzzing, fretting out or other anomalies. We constantly compared it to playing a well-tuned piano. When something sounded not quite right, it was pilot error, each and every time. After all, we are human and miss sometimes.

We tried a variety of tunings and always came up happy. Taylor’s tuners turn smooth and evenly, and you wouldn’t know the guitar has a nut because the strings slide so smoothly across it. The guitar always stayed in tune, and was always right where we left it, at times only off by a cent or two the next day we picked it up. The Elixir HD Light .13 gauge strings shipped on the guitar were a good match, and nothing we would personally seek to change.

Taylor’s Expression System 2 worked perfectly in the concert setting. Turning the system on was as easy as plugging the guitar in, and EQing the sound to taste.

We brought the Taylor 614CE to a local park, just to recreationally strum a little while. It was a nice day, with 45% relative humidity, of course! The 614CE sounded full, rich in dynamics, and always true to pitch. Chords came together perfectly intonated. The overtones of the instrument were extremely present, and they seemed to jump off the strings. Dynamic range went from a whisper to spiritedly loud strumming. Pianissimo strumming, however, was difficult to achieve due to the abundant resonance in this guitar. We felt this was a good thing, though, because our softer strumming was well defined and projected, as opposed to other acoustic guitars with less musical sound projection.

Overtones and resonance were the two features we felt contributed to the spirit of our test guitar. We heard overtones sustain on a low, open E (standard tuning) for 92 seconds!

After making the ladies in the park swoon over us, we brought the Taylor 614CE to our band rehearsal and plugged it into a mid-level PA system. We found the frequency sweeps of the electronics tone knobs to be well selected and musical. As we have stated in previous reviews, no electronics system can take the place of a well miked acoustic guitar. But given that fact, we felt the electronics were more than adequate. They did not sound thin and airy, and definitely sounded more organic than other acoustic guitars we owned in the past.

Rehearsal was one thing, but stage volume is something else. So next, we brought the 614CE to a big stage gig with our seven-person tribute act. The Taylor was plugged into a house-supplied DI and then out to a PA system of significantly more power. We dialed up the guitar’s volume control to about 7 or 8, and there was no feedback. Most importantly, the acoustic filled the venue floor with beautiful acoustic sound. Tone controls were left on center and sounded great there. If you have enjoyed the sound of the Expression system in the past, it’s subtly improved here. We liked it before and had no issues with the tone, and now it’s even more natural sounding.

Finally, two of our other editors put the guitar through its paces in the studio (tracking a modern rock record), miking the guitar with premium condenser microphones, and they came away with continued admiration, but noting a very different vibe than with previous Taylor guitars they have played. Having recorded with a wide range of Taylor instruments previously (reviewed here, of course), we found some appreciable differences in tone between the new 614CE and some other instruments in the Taylor line.

While Taylor guitars tend to be known for the brilliant high-end sparkle—making them a huge hit with Nashville artists (not to mention others in the pop world), this particular guitar doesn’t have that sound, and isn’t the right one in the product family if it’s that sparkle you crave. Rather, we think that this one would better suit the classic rock strummer and the alt rock crooner, or the melancholy singer songwriter with a baritone voice, as it has a warmer tone with less high end brilliance. It retains the smooth, balanced tone string-to-string that we expect and love from Taylor guitars, as well as the piano-like quality that floors you when strumming those open voicings in the studio. But, the top end is not as bright as other favorites of ours in the line such as the 816CE.

It’s nice to hear that Taylor has something for all variety of players, so as always, play a few models to hear the differences for yourself if you’re not really sure which tone you’re after.

Demo of the Taylor 2015 614CE courtesy of Taylor Guitars.

Included was a wealth of information, most importantly short- and long-term care instruction for acoustic guitars. Taylor recommends the Planet Waves Humidipak, which we subsequently purchased and started using (because this guitar fit this particular reviewer like a hand to a glove and was destined for purchase).

Looking into proper guitar care and further information for this review, we found several guitar care videos by Taylor staff—and even Bob Taylor himself.

The Taylor 614CE (MSRP $4,198) sells for approximately $3,200. Although it’s not inexpensive (you can lay on a beach at a tropical island for about a week for this price), we feel that it is certainly priced right for an instrument of this pedigree. And, long after you’ve forgotten about that beach vacation, you’ll still be playing this guitar. 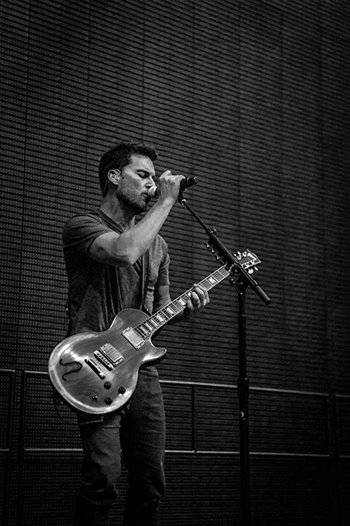