MPc: Let’s start with a 30-second summary of your musical life.

RO: I grew up in Japan. Started playing piano when I was three years old, in Osaka. I moved to Tokyo when I was fifteen, worked there for seven years, then I moved to L.A.

MPc: What brought you to Los Angeles?

RO: Music. I was 22. I did my solo record, called Making Rock. It came out in Japan, on Canyon Records. It was the guys from Toto: Steve Lukather, Jeff Pocoro, Neil Stubenhaus on bass, David Foster the producer was my second keyboard player, and Jay Gradon was playing guitar. That was my first time visiting L.A., and then I decided to move to L.A. after that. I went to the Dick Grove School of Music, four years, then started getting local gigs.

Our strength is the live performance.

MPc: Who were some of your influences?

MPc: How has songwriting evolved in Spock’s Beard over the years with different singers?

RO: The first six CDs were all about Neal [Morse, who co-founded the band with his brother Alan]. He wrote 100% everything. It was easy. We just got the demo from him, we’d play, arrange, and re-arrange in the studio. Then after that, when he left [the band], I said oh my god, we have to start writing.

We struggled in the beginning. It was so hard for us, because Neil’s writing was incredible. Now, we don’t really think about who’s singing, or their style. We just try to keep Spock’s style as much as possible.

MPc: How would you describe Spock’s Beard’s style?

RO: It’s just Spock’s Beard. It’s different than everyone else. Of course Ted is great, we came up with a good CD (2013’s Brief Nocturnes and Dreamless Sleep). Our strength is the live performance. It’s so much fun. So much energy. A lot of characters on stage. That’s what makes us different than other bands. So many other prog bands, on stage, they just sit and quietly play, but we’re jumping around on stage. Fun to look at. [laughs]

MPc: When you write now, is it mainly you and Alan writing?

RO: We all write songs and send them out to everybody. At the end, right before we go into recording, we audition the songs and decide which songs are good for Spock. Then we record it. We record about 80-90 minutes of material so we can choose which to use, and the leftover is bonus tracks for the European market, or our market, or Japan.

MPc: Something I’ve always appreciated about Spock’s Beard is that you guys aren’t afraid to embrace pop songs.

RO: We don’t really think about it, being commercial or being so prog. We just give feedback to the writer and it just comes out that way.

MPc: Vocal harmonies are a big part of the sound.

RO: Everyone sings so well, especially [our drummer] Jimmy. He sings his ass off. He has a high voice in that little body [laughs].

MPc: There are certain staples in the Spock’s Beard keyboard sound. Let’s talk about your keyboard rig.

RO: Hammond. Gotta’ be there, the Hammond phrasing, distorted sound, percussion, some reverb, gotta’ have that for prog, and the Mellotron, definitely.

MPc: What is it you love about the Mellotron?

RO: The sound. It’s so different when you hit it. You just set the mood for prog. It creates a whole scene. You know, it only makes three sounds: string, choir, and flute. But when you have it, “Oh, it’s prog.” And, a Minimoog.

MPc: Would those be your three desert island synths, then?

MPc: Which virtual piano do you presently use on the road?

RO: Right now I’m using [Apple] Mainstage. I started using it two years ago, and I’m finally getting the hang of it. It’s so easy to program. I use the True Piano plug-in, and some samples, some Yamaha pianos. I like Arturia’s [V-Collection], and the Mainstage sounds. I have tons of different Minimoogs and Prophets.

I take my Minimoog on tour, but not here. I didn’t this time because it’s a one-off gig [in New York City], and it’s hard to set up four keyboards. Hammond, Minimoog on top, and on the other side piano, synth on top, for the European tour. But one-off like this, I just use two keyboards, an organ and synth.

MPc: How do you feel about having a laptop as part of your keyboard rig. Has it made things better or worse for you?

RO: Yes and no. It’s definitely easy to edit. But a computer fails sometimes. It doesn’t freeze, but I’m having trouble finding a good foot controller for patch changes. Sometimes pushing the program, it doesn’t go, and I have to reach over to the computer and change patches.

When I’m playing the Hammond, sometimes it’s hard to reach other keys, like Hammond and piano sounds. But now, I’ll push a volume pedal down to get Hammond sounds, and volume up will mute the organ and at the same time kick in the piano sound. You’ll see that tonight. I just figured this out this tour, Mainstage makes it really easy to do.

MPc: Many Spock’s Beard songs have many layers of keyboard parts. How do you go about translating those parts to a live performance?

RO: You’ll hear it tonight! [laughs]. Especially when Neal was in the band, he played keyboards. Mostly he played piano sounds and some synth sounds, and I played Hammond, Mellotron, and Minimoog. After he left I had to cover both keyboard parts. Whoa.

I try to play everything just like the CD. That’s why I need four keyboards! So when I turn around, I have everything. And that’s why Mainstage makes doing everything so easy, switching between one keyboard having two or three different sounds, muting and unmuting sounds.

I was really trying to use different soundsall throughout the album this time around.

MPc: What are some of your favorite songs to play live?

MPc: On your 2013 record, Brief Nocturnes and Dreamless Sleep, how did you get that cool riff sound at the start of “Afterthoughts?”

RO: I really like the intro sound on “Afterthoughts.” The Hammond going through a Leslie with a real cheap distortion effect, we cranked it up. That was fun to do.

MPc: Do you use a real Leslie in the studio?

MPc: You seemed to embrace a broader palette of sounds on The Oblivion Particle than I’ve heard on previous Spock’s Beard albums. Tell me about the changes you made to your keyboard rig for the new record.

RO: Well, I acquired a new grand Yamaha piano, so that is featured extensively throughout the album. Also I’m using Arturia plug-ins in addition to my regular rig.

RO: Nothing actually changed, we just did what we usually do. I think our writing has improved due to all of us becoming better writers with each album!

MPc: “Bennette Built a Time Machine” is one of my favorite songs the band has ever written. Tell me about the song, and the interesting synth sounds you brought to it.

RO: It’s one of my favorite songs on this CD, as all of us contributed heavily to the writing of this song. It’s truly a group composition. As for sound design, I used the Arturia soft-synths to get some different sounds from what I normally use.

MPc: There’s some cool keyboard soloing going on in “A Better Way to Fly.” What did you use for those lead sounds?

RO: For the lead sound I again used my new Arturia soft synths. I was really trying to use different sounds all throughout the album this time around.

MPc: “The Center Line” opened with some great classical piano. Tell me about your inspiration for that piano section. There was some nice piano soloing in “To Be Free Again,” too. Was there a conscious decision to play more acoustic piano on this record? And was that your new Yamaha piano or virtual/sampled piano?

RO: I used the Yamaha grand for both tracks. No sampled piano is used anywhere on the album. As for inspiration, I was trying to write something similar to “The Doorway,” but it got more complicated than “The Doorway” ever was! On “To Be Free Again,” I was going for a Bruce Hornsby kind of sound, something a bit more like contemporary fusion. 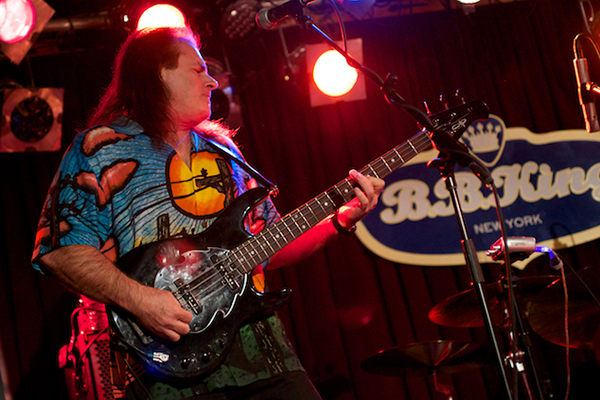