FOLLOWING A SOLD-OUT SCREENING IN CAMDEN, LONDON THEATRICAL DATES ARE BEING SET ACROSS THE U.K./EUROPE WITH NORTH AMERICAN DATES BEGINNING FRIDAY, SEPTEMBER 14 AT THE METROGRAPH IN NEW YORK CITY

New York, NY / Los Angeles, CA / London, U.K., June 19, 2018 – In celebration of Public Image Ltd.’s (PiL) 40th Anniversary, Abramorama and Verisimilitude have released the first official trailer and poster of the new music documentary The Public Image Is Rotten. The career-spanning documentary, tells the story of music icon John Lydon and his pioneering group PiL with a level of depth and intimacy never before seen. Following a sold-out screening at Camden London’s Odeon Cinema, the film will be released in multiple theaters across the United Kingdom and select European cities throughout the summer, followed by a North American theatrical tour in the fall kicking off at New York City’s downtown Metrograph on September 14. Watch the trailer for the film The Public Image Is Rotten HERE.

Directed by Tabbert Fiiller, The Public Image Is Rotten features in-depth interviews with John Lydon,former and current bandmates as well as Flea (Red Hot Chili Peppers), Ad-Rock (Beastie Boys) and Thurston Moore (Sonic Youth) among others, and the film is loaded with electrifying archival performance and interview footage.

Abramorama’s Chief Operating Officer Karol Martesko-Fenster and West Coast Head of Acquisitions & Business Development Evan Saxon added, “We’re thrilled to be working with Verisimilitude’s Tyler Brodie and Hunter Gray, alongside John Lydon and longtime PiL manager John Rambo Stevens on the global release. John Lydon forever changed the face of music and pop culture in many of the same ways Elvis did. The timing of this is perfect as PiL is touring the world and giving fans an amazing live show like never before. We’ll leverage the theatrical campaign to work closely with the fantastic team at Universal Music to drive awareness for their comprehensive box set also titled The Public Image Is Rotten.”

After the breakup of the Sex Pistols, John Lydon (John Rotten), formed Public Image Ltd. his groundbreaking band which has lived on nearly 15 times as long as his first one. A creative originator, Lydon has kept the band alive ever since, through personnel and stylistic changes, fighting to constantly reinvent new ways of approaching music, while adhering to radical ideals of artistic integrity. John Lydon has not only redefined music, but also the true meaning of originality. With his trademark acerbic wit and unpredictable candor, Lydon offers a behind-the-scenes look at one of music’s most influential and controversial careers.

Widely regarded as one of the most innovative and influential bands of all time, PiL’s music and vision earned them 5 UK Top 20 singles and 5 UK Top 20 albums. With a shifting line-up and unique sound, John Lydon guided the band from their debut album ‘First Issue’ in 1978 through to 1992’s ‘That What Is Not’. After a 17-year hiatus, Lydon reactivated PiL in 2009 by taking them back on the road worldwide. In 2015 the band released their 10th studio album ‘What The World Needs Now…’ which followed the huge critical success of 2012’s ‘This is PiL’, the band’s first album in 17 years. ‘What The World Needs Now’ peaked at number 29 in the official U.K. album charts and picked up fantastic acclaim from both press and public. (The album also peaked at number 3 in the official UK indie charts and number 4 in the official UK vinyl charts). ‘What The World Needs Now…’ was self-funded by PiL and released on their own label ‘PiL Official’ via Cargo UK Distribution.

John Lydon and his PiL bandmates Lu Edmonds, Scott Firth and Bruce Smith, are currently in the midst of a 36-date tour of UK/Europe and Japan. They are the longest stable line-up in the band's history.

About Abramorama:
Abramorama is the preeminent global theatrical distribution and rights management partner for music films today and is recognized for the consistent high quality of its work on award winning feature films. An innovator in the focused, personalized form of film distribution and event cinema, Abramorama provides invaluable alternatives to filmmakers and content owners. An industry leader in marketing, promotion, and distribution, Abramorama continues to trail-blaze exciting new pathways for filmmakers to find their audience.

About Verisimilitude:
Verisimilitude is a film company with a steadfast commitment to tell challenging, unique stories in the most compelling of ways. We work with directors to create cinematic visions which span the full spectrum of style and imagination, while always striving to find the truth, and verisimilitude within the story beneath. For more information visit www.verisimilitude.com. 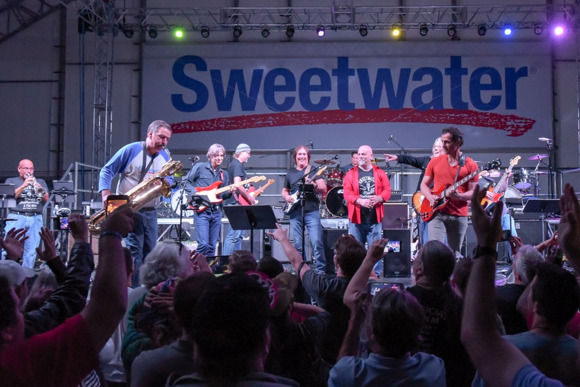