ALL THE BEST OF BRITISH ROCK IN MUST-SEE SHOW FEATURING YES, ASIA WITH THE RETURN OF FOUNDING MEMBER STEVE HOWE IN A SPECIAL PERFORMANCE, JOHN LODGE OF THE MOODY BLUES, AND CARL PALMER'S ELP LEGACY WITH GUEST VOCALS BY ARTHUR BROWN 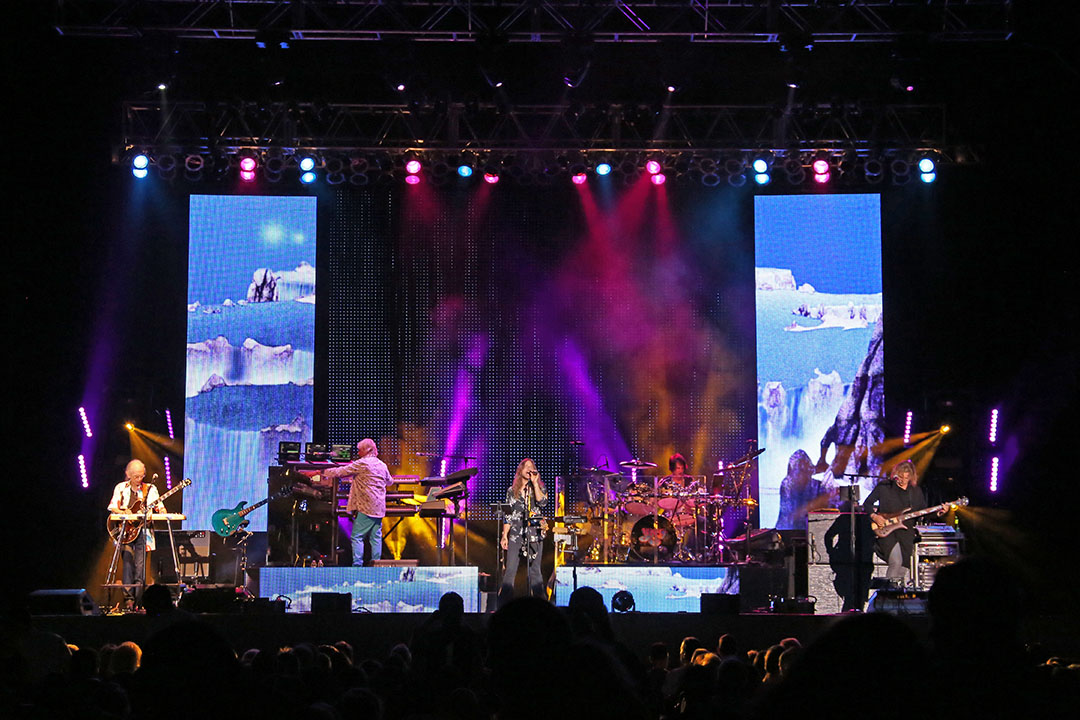 The 2019 summer concert calendar has just been lit up with the announcement of YES' North American concert tour, "The Royal Affair Tour." Headlined by prog rock pioneers and Rock & Roll Hall of Fame inductees YES, who triumphed last year with their acclaimed and hugely successful #YES50: Celebrating 50 Years of YES tour, this must-see best-of-British-rock show will also feature Asia with the return of founding member Steve Howe in a special performance, John Lodge of The Moody Blues, and Carl Palmer's ELP Legacy with guest vocals by Arthur Brown.

The first set of dates for "The Royal Affair Tour" has been announced. The trek will launch Wednesday, June 12 in Bethlehem, PA and visit cities including Holmdel, NJ; Toronto; Nashville; Hollywood, FL; Phoenix; Las Vegas; and Irvine, CA before wrapping Sunday, July 28 in Saratoga, CA. Most shows go on sale Friday, April 5. More dates will be revealed in the coming weeks.

See below for full list of tour dates and go to www.yesworld.com/live for ticketing information.

YES is Steve Howe (guitar -- joined 1970), Alan White (drums since 1972), Geoff Downes (keyboards; first joined in 1980), Jon Davison (vocals since 2011) and Billy Sherwood (guitar/keyboards in the 1990s and the late Chris Squire's choice to take over bass/vocals in 2015), with Jay Schellen on additional drums. See quotes below from YES.

Look for YES to perform songs from throughout their storied career, one of rock music's most prized bodies of work, and their set will honor the memory of YES members Chris Squire and Peter Banks.

Carl Palmer will honor the memory of his fellow Emerson, Lake and Palmer members Keith Emerson and Greg Lake, with vocals by British vocalist Arthur Brown.

As part of the evening's British theme, there will be Alan White of YES' tribute to John Lennon; White was the drummer on Lennon's solo material including the recording of "Imagine."

Steve Howe: "Yes is delighted to headline this celebration of British music which has been so warmly received in America over the past five decades."

Alan White: "I'm looking forward to joining a number of classic British talents that have delighted so many fans over the past half century."

Geoff Downes: "This is a unique celebration of the British contribution to classic rock over many decades. It will be inspirational to be a part of. And I know it is what John Wetton would have wanted." 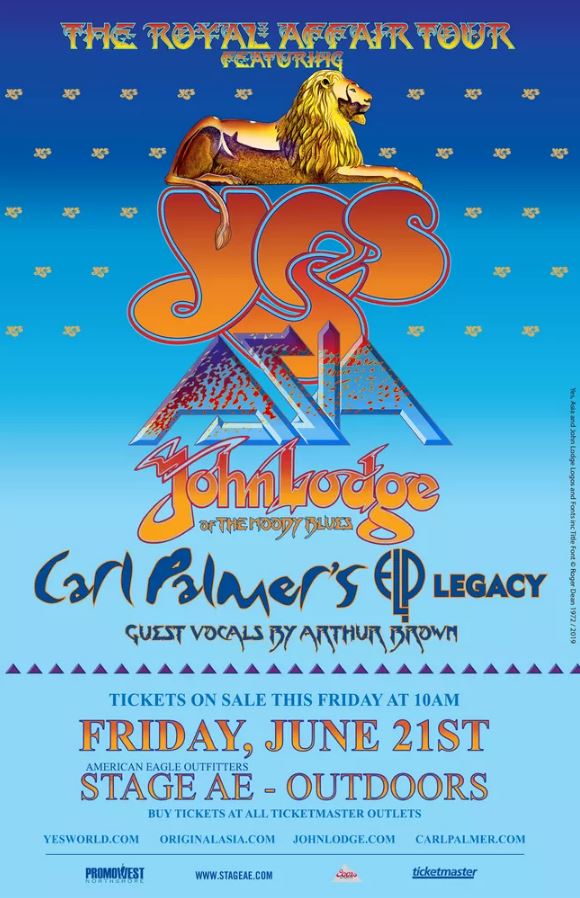 The initial dates for "THE ROYAL AFFAIR TOUR" are as follows, with more to be announced soon:

"The entire band over hours delivered sights and sounds that consumed the theater with tone and texture while nudging us into lyrical leaps down rabbit holes...Yes was sweeping and spectacular."
--John Barry, Poughkeepsie Journal, 7/25/18

"When [Tony Kaye] showed up in Anaheim, you could feel an extra surge of excitement...[Steve Howe] indulged the audience with the shrill of the steel [guitar] on the 'Soon' portion from 'The Gates of Delirium.' That one still makes the hair on my arms stand to attention. Slender and sleight, the guitarist attacks his instrument with pointed passion and precision...Tonight, there was simply no way to ignore [Howe's] brilliance...Kaye played with abandon, asserting his might at the breaks and on an extended solo during 'Roundabout.' By the time the grand sweep of 'Starship Trooper' spread its sonic space dust over the bedazzled crowd, the majestic history of Yes couldn't have been more apparent...Tonight proved the bar has been set high."
--Shawn Perry, Vintage Rock, 6/20/18

"YES is the type of band that always puts on an unforgettable show and takes the audience on a journey through decades of great music. [The Ford Theatre in Los Angeles] was the perfect venue to see YES at."
--Alex Kluft, Music Connection, 6/22/18

"The opulence of the John Anson Ford Amphitheatre [in Los Angeles] with the captivating majesty of the YES experience was the absolute winning combination. As the sun was beginning to set, the legendary YES made their way to the stage, ready to celebrate their 50 Year Anniversary with the concert of a lifetime. Out onto the stage arrived a collection of the most respected musicians on the planet and what a dazzling set of YES songs they all had in store for the audience!...The grand finale was nothing short of mesmerizing...YES at 50 presents each and every member at the height of their creative energies, unleashing timeless compositions that will remain within our consciousness for an eternity. Do not miss YES 50 when they arrive to captivate your town with their thrilling auditory tapestries!"
--Ken Morton, Highwire Daze, 6/26/18

"For a band to persevere through 50 years, and still perform with the virtuosity for which Yes is known, is a stunning accomplishment...No other '70s' prog-rock group has survived with the vitality and widespread fanbase of Yes. This night at the Warner [in Washington, DC] showed us why Yes music is still the gold standard of prog-rock."
--Marc Caicedo, Parklife DC, 7/27/18

"The current configuration [of Yes] hearkens back to its heyday while striving to remain contemporary...Yes was always perceived as a band that combined otherworldly lyrics and vocals with superb instrumental prowess. This version remains as muscular as ever, and Howe has emerged as an honest-to-God guitar hero, as opposed to simply the brilliant guitarist he's always been."
--Ross Boissoneau, Local Spins, 6/29/18

"The night featured a wide range of songs from across their 21 album catalog...This wasn't meant to be a 'greatest hits' show, but a celebration of the diversity of styles across the band's 50 year history, and an homage to the late Chris Squire...YES put on a great show and it was fantastic to see Tony Kaye perform with the band that he founded 50 years ago."
--Kevin Keating, SF Bay Area Concerts, 6/21/18

"YES played some of their most eccentric songs which also showcased the band's musicianship and playing ability. 'Perpetual Change,' 'Does It Really Happen?' and 'Soon' were played to near perfection and the audience showed their appreciation with standing ovations at the conclusion of each song...The band put on an exceptional performance and it was an awesome evening of great music."
--Michael Baltierra, VNYLDEN.com, 6/16/18

"Howe's guitar playing was stellar and watching his nimble fingers move effortless across the neck of any guitar is worth the price of admission...A perfect evening of YES playing as good in 2018 as they did in 1968...actually maybe even better."
--Pat Francis, Pop Culture Beast, 6/25/18

"These Rock and Roll Hall of Famers delivered a set for connoisseur fans of the band...Musically, oh my, is this Yes awesome; as musically proficient as any that ever taken the stage since [they] first played together in public as Yes..."
--Steve Smith, Classic Pop, Rock & Country News, 7/3/18 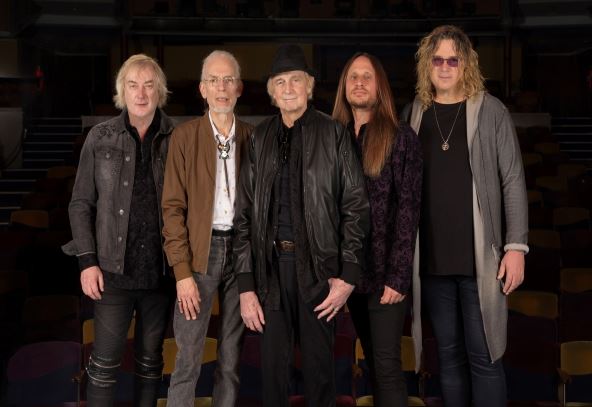 About YES:
Founded in 1968 by the late Chris Squire and Jon Anderson, Grammy-award winning recording artists YES has created some of the most important and influential music in rock history, such as iconic pieces "Roundabout," "Close to the Edge," "I've Seen All Good People," "Owner of a Lonely Heart," "Starship Trooper," and countless others. The band's albums, including Fragile, Close to the Edge, Tales from Topographic Oceans, Relayer, Going For the One and 90125, have been certified multi-platinum, double-platinum, platinum, and more by the RIAA, and have sold over 50 million records total during the band's long and successful career that has so far spanned over five decades. Among the world's most influential, ground-breaking, and respected progressive rock bands, YES continues creating masterful music that inspires musicians, fans and music lovers around the world. 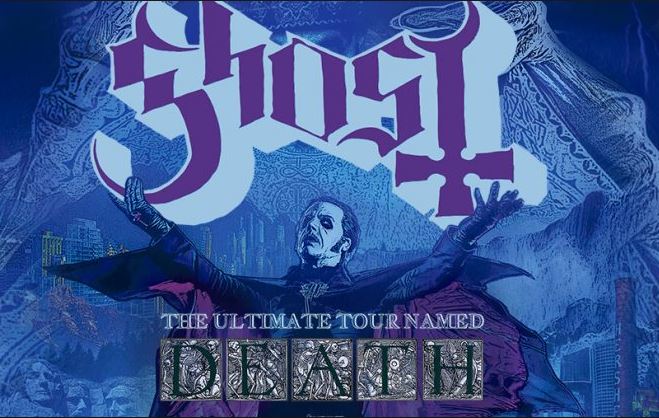 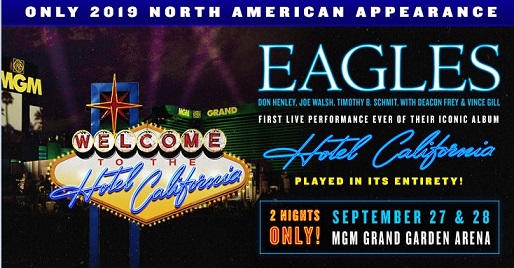