Black Corporation surprised us with Deckard’s Dream. To quote the website, “Deckard’s Dream is an 8-voice polyphonic analogue synthesizer inspired by a certain cinematic sound from the late 1970s and early 1980s.” Black has essentially recreated the classic Yamaha CS-80 and fit it into three rack spaces (four if you count the optional expander). It sports eight-voice polyphony with two independent synthesizer layers per voice, with discrete waveshapers to help reproduce the oddities of the original waveforms. Autotune keeps all 16 VCOs tracking perfectly, but you can detune and microtune settings for a more vintage feel.

With the addition of MIDI, 256 presets, an OLED display, and an upcoming software editor provided by Spektro Audio, this vintage recreation has become quite modern in its capabilities.The 1U rackmount expander provides 16 assignable CV inputs, analog ring-modulator and chorus, along with Sustain I/II controls. It may be also be used as a standalone effects box and a CV-to-MIDI converter. We were quite impressed by the sound, though the $3,749 price and three-month build time may hold some people off. Still, it’s quite a bit cheaper and far more practical than owning an actual CS-80. And for those truly brave souls, a DIY kit is offered for less money as well.
—JB Korg introduced the Prologue, the next evolution of the analog Minilogue and Monologue lines. The two Prologue models offer 8-voices/49 keys and 16 voices/61 keys respectively. Both have 500 voices (250 preset and 250 user), four modes (poly, mono, unison, chord), the ability to split and layer, an arpeggiator, multiple, 32-bit digital effects, and two (small) screens including the Oscilloscope seen on the Monologue.

Interestingly, KORG is providing a Prologue SDK (Software Development Kit) that allows developers to program, customize and extend the capabilities of the multi-engine and digital effects and is expected to be available for download in the spring of 2018. Our limited time with the synth at the show revealed great sounds and a great feeling keyboard. The 61-key model also features a VU meter that governs the analog compressor/booster. Expect a full review soon.

Korg also introduced the Volca Mix. The volca Mix is a four-channel analog performance mixer that lets you construct a live setup combining multiple Volca units. There are two mono inputs and a pair of stereo inputs, as well as DC connectors to power three other Volca units. There are three faders, a LO/HI CUT filter, gain control, and RCA stereo line outputs with a master volume LED VU. There’s also a send/return jack for connection to an external effect unit. Finally, there’s an analog sync jack which allows for tempo sync, as well as start/stop options.
—JB

Native Instruments decided to make their foray into the sample market with the launch on Sounds.com. Currently, the reigning champion of sample packs and sounds for loop-based music creation is Splice. However, NI has made it clear it wants a share of the market, and at the price points they are advertising, Free or Pro ($9 a month), Splice is in for some serious competition!

Not only is NI offering a great sample library, they also are offering a 50/50 split with sound providers. Additionally, they have created a software interface to use as a plug-in companion to sounds, so you can easily search while in a session to find the instrument or vibe needed. Although a new product category for NI, it seems they have done their homework and are poised to make a big impact.
—JL

We were waiting eagerly to see an expanded, rackmount version of the popular Key Largo mixer-in-a-pedal, and the KL-8 was introduced. In this 1U mixer, you get: inputs for up to four stereo keyboards, and two USB computer audio interfaces (for failover between two computers). There’s an insert loop for shared effects/processing, and separate mains and monitor outputs (transformer isolated XLR, of course). From the front panel, you can press a Cue button to pull any instrument out of the mains and monitors and send them straight to your headphones, useful for auditioning sounds and troubleshooting without interfering with your main output. It’s also a MIDI interface for your computer and is built to typical Radial standards (tour-grade construction). A pair of stereo auxiliary connections are useful if you want to connect a few of these together, which may be necessary for anyone with a large keyboard rig.
—SK

Roland Cloud continues to expand, and now includes full reproductions of the original TR-808 and TR-909 rhythm composers as VST and AU plugins. There was also a preview demonstration of the new SRX Orchestra virtual instrument, which should become available in a Roland Cloud update shortly. The SRX Orchestra is the first of Roland's famed SRX Expansion Library to be made available as an individual virtual instrument, and we’re super excited about this. The SRX Orchestra complements the recent inclusion of a virtual JV-1080, bringing more of the distinctive sound of ‘90s-era Roland instruments to Roland Cloud. Roland hinted there will be other SRX reproductions, and our fingers are crossed in hopes for a virtual “Ultimate Keys” SRX instrument.

In the hardware department, most models remained unchanged from 2017. Roland was displaying their refreshed KC keyboard amplifier series, and we were impressed with the variety of models and love the compact models that can run off batteries and mount on a microphone stand, perfect for personal monitoring and impromptu barbeque gigs. We’ll be taking an in-depth look and listen soon.
—JB Look out, mighty A-Frame! Your days are numbered based upon the fantastic new stands we saw coming out of the new Sequenz brand (a new line from KORG). The rugged and modern design leaves room for your pedals on the floor and provides multiple angle, width, and height adjustments.

You can easily put three large keyboards on one of these stands in a compact arrangement. We’ll be reviewing these shortly as we couldn’t judge for ourselves how easily they set up/tear down for stage use.
—SK

Perhaps the most intriguing synth we saw at NAMM was Waldorf’s Quantum digital-analog polyphonic synth. Combining digital digital oscillators with analog filters, classic wavetables with new additions from the revered Nave synth (including speech synthesis and wavetable generation from audio), sampling, and an impressive high-resolution, multi-touch display results in a synth that really “wowed” us.

Each parameter section has knobs highlighted by a specific colored LED, and when you turn any given knob, a large graph appears on the screen to show you not only what the parameter value is, but how you are affecting the shape of the element visually. Watching envelope shapes adjust on the fly as if working with a soft-synth provided a whole new level of visual feedback that we loved. There’s a premium Fatar TP8, 61-key keybed that feels great, eight voice polyphony, 4GB of internal flash memory (preloaded with 1 GB sample data), effects, an arpeggiator, and external CV connectivity! There’s a lot of horsepower to be discovered here, and while the finishing touches are still being tweaked, it sounded great already. We look forward to getting our hands on this one when it ships later this spring. Waldorf was also showing off the STVC synth as well. Essentially a string synthesizer with a vocoder, it is based upon Waldorf’s Streichfett, which ironically had neither keys nor a vocoder. There are several sections: the string section starts with an oscillator bank using octave dividers, followed by a mixer, an equalizer and an ensemble effect, similar to string machines from the ‘70s. A single knob sweeps through mixer and EQ settings for Violin, Viola, Cello, Brass, Organ, Choir and more for creating rich and creamy sonic textures. The Solo section is a 16-voice synthesizer that complements the string sounds. The Vocoder replaces the equalizer in the string section with the filter bank that models the vocal tract from the speech input. This can produce quite intelligible speech or singing using the fully polyphonic oscillator bank. Formants can be modified, which can result in a perceived change of gender. Adjustable jitter of the string oscillators renders the voice hoarse, creaky or a complete whisper. Admittedly, we had fun at the booth playing with the vocoder, but overall this intriguing synth sounded very good as well. —JB

Yamaha introduced us to the Genos workstation keyboard in a private event the week before NAMM. We were skeptical about it being a typical “arranger” keyboard, but it has great sounds for writing, arranging, and orchestrating. The MSRP price of $6,799 is sure to frighten a few players, but given that the sound engine sports twice the processing power of the flagship Montage synth, you know you’re in for a sonic heavyweight here.

Sporting 76 keys, 500 preset styles, over 1,500 sounds, 1.8GB of user memory space, and two LCD displays, there’s a lot of power on tap here, packaged behind an interface that appears to be far less complex than your typical workstation keyboard. While possibly useful to already-established (successful) composers, we wonder how many aspiring singer/songwriters will have the means to take advantage of this power. We’ll be putting it to the test shortly, and will let you know more.  —JB and SK 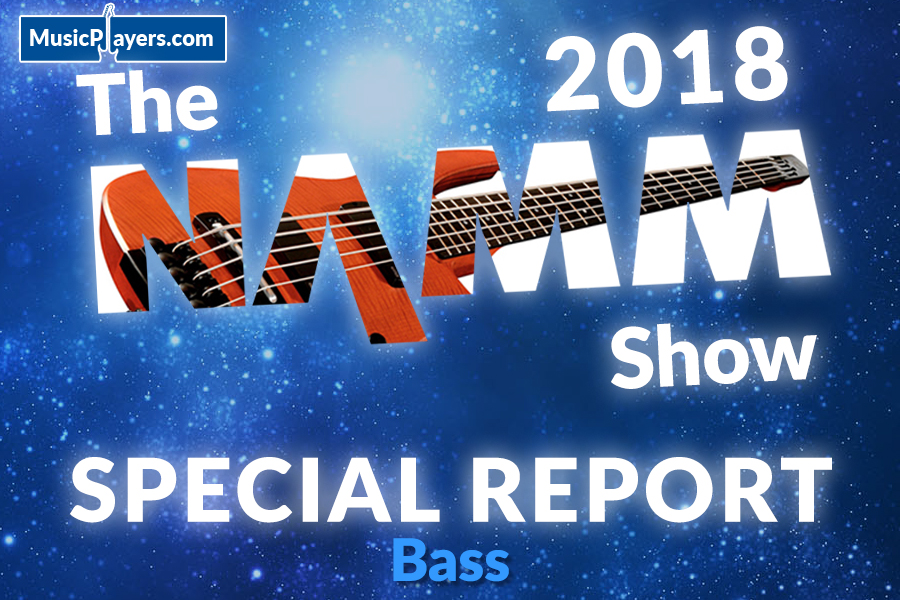 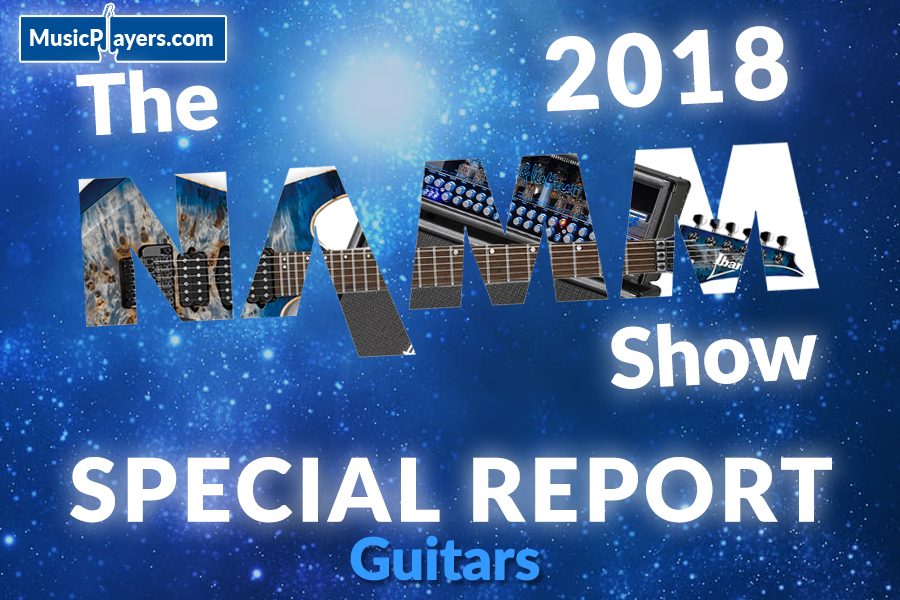