ANNOUNCE NATIONWIDE U.S. HEADLINING TOUR THIS FALL IN CELEBRATION OF THE 15th ANNIVERSARY OF LANDMARK SECOND ALBUM ‘THE REASON’ TOUR KICKS-OFF OCTOBER 25 IN PORTLAND, OR WITH SPECIAL GUEST SECONDHAND SERENADE

Q&A WITH DOUG ROBB OF HOOBASTANK

In celebration of the 15th anniversary of the release of their landmark second album The Reason, the Multi-Platinum band HOOBASTANK, have announced they’ll launch a nationwide U.S. headlining tour this fall. “The Reason Tour” will see the band perform the pivotal album in its entirety alongside fan favorites and new songs off their recently released sixth studio album PUSH PULL, available now via Napalm Records HERE. The trek will kick off October 25 in Portland, OR and hit 24 major cities across the states (see all dates below). Renowned singer-songwriter, Secondhand Serenade (aka John Vesely)—who is celebrating the 10-year anniversary of his platinum debut Awake: Remixed & Remastered, 10 Years & 10,000 Tears Later-- is slated to open on the majority of the cross-country trek. Fan club ticket pre-sales start August 14 at 10AM local, (password PUSHPULL2018) and public on-sales start Friday, August 17 at 12PM local everywhere HERE.

2018 marks the 15th anniversary of The Reason which was produced by Howard Benson. The title track became a worldwide hit #2 Billboard Hot 100, #1 US and World Modern Rock charts (#10 Australia, #12 UK, #15 Germany), following the first single "Same Direction" (#9 Modern Rock, #16 Mainstream Rock). The album reached #3 on the Billboard Top 200 album chart and set a record in Canada, with 21 weeks at #1. Below is a Q&A with frontman DOUG ROBB and Guitarist DAN ESTRIN of HOOBASTANK where they describe the anniversary and what fans can expect from the fall U.S. headlining tour.

HOOBASTANK’s first new album in six years, PUSH PULL delivers the large-scale, muscular, alternative rock sound the band is known for while re-establishing their presence in the current pop-rock spectrum. Additional album highlights on PUSH PULL include “True Believer” and “Buzzkill (Before You Say Goodbye)” which show the band maturing from adolescent to adult relationships and examining the difficulty of keeping alive what fuels them. “We Don’t Need the World” and “There Will Never Be Another” explore the memories which bind two people together. Additionally, DOUG’s lyrics to the headphones-worthy “Fallen Star” were inspired by a memory of watching a military family of a soldier who died in combat, while the go-for-broke “Just Let Go (Who Cares if We Fall),” sums up HOOBASTANK’s current attitude.

Here’s a Q&A with lead vocalist DOUG ROBB of HOOBASTANK reflecting on his inspiration as an artist and songwriters; his most pivotal albums; the night of his best show ever; and what surprises him most about their career so far.

Can you talk about how you came up with the set list and what the 15th anniversary of The Reason means to you?

DOUG ROBB:
“We are playing the entire 12 songs off The Reason album. The remaining songs we will change up from night to night. Most likely, we’ll do some combination of singles off of other albums, songs we, enjoy playing and some new songs off Push Pull.”

“The Reason tour signifies a lot. First, we get to revisit a time in our career that was so exciting and groundbreaking for both us and our fans. You don’t get that opportunity too often. Second, it reminds us how fortunate we have been to be able to do this for so long. It’s humbling. Each show will be like a time machine for our fans and us.”

How do you feel today when you see people’s reaction to the song “The Reason” when you play it live?

DOUG ROBB:
“It’s always great to see audiences react positively to your music. That song being 15 years old now makes it even sweeter. That it still connects after so long is special.”

What was the inspiration behind “The Reason"?

DOUG ROBB:
“Lyrically it was a collection of old post-breakup letters and journal type writings that I had collected over the years. I read through them, pulled phrases that I liked out of them, found themes throughout them and put it all together.”

On PUSH PULL you diversified and it’s reflected in the music. It’s a mix of rock, indie and even pop. What inspired you to keep musically expanding?

DOUG ROBB:
“I think we really let this album happen “organically”. Meaning we didn’t try to make a song a “rock” song if it wasn’t want to start with. We let each song turn into what it was. If it was pop, fine. If it was indie, fine. Instead of over censoring ourselves we just let it come out naturally. The inspiration behind that approach would probably just be freedom. Not feeling like we had to satisfy anyone except ourselves. Not worrying about it not fitting into any previous style.”

On the new record you cover “Head Over Heels”; why did you choose that song to cover?

DOUG ROBB:
“We’re kids of the 80’s and 90’s and have fond memories of the music we grew up listening to. Tears for Fears are a great band whose pop songwriting we admire and ‘Head Over Heels’ is one of our favorites of the entire era. We got to relive and recapture those fun, nostalgic feelings and we hope our version does the original justice.”

What inspired the sentiment behind the song ‘Push Pull’?

DOUG ROBB:
“It’s about being yourself. Doing what you want and what feels best to you. About not being caught up with far-off goals and living more in the moment. Doing these things and being aware of the “gifts” and good things that come to you because of it. It’s about honesty to yourself. Sometimes you get so preoccupied and obsessed with something you’re chasing that you change who you are in order to get it when in reality you should just be yourself and be happy with all that comes with that.”

What would you like for people to take away from listening to PUSH PULL? Did any song in particular surprise you? Why?

DOUG ROBB:
“Everyone has taken such different messages and ideas from our music that I couldn’t really tell anyone what they should take from Push Pull. Instead of hoping for something for them to take away, I’d rather just let them listen and have them tell me what they took from it. Just like ‘Push Pull’ itself. I’m not going to force anything, I’ll let them hear it and let the cards fall where they may.”

What were the pivotal albums in your life, growing up?

Describe your best night on tour, ever.

DOUG ROBB:
“That’s WAY too hard to remember. There have been so many amazing nights for so many different reasons. I couldn’t remember just one let alone describe it. I just feel lucky that I’ve had so many great tour experiences.

DOUG ROBB:
“I couldn’t pick one in particular, but I’m sure it would have to do with either being sick, having a bad show or missing my family. Maybe even a combination of all three. That sounds like a recipe for a terrible tour night and it’s happened for sure.”

What’s the single best piece of advice that you’ve been given? What has surprised you most in your career?

DOUG ROBB:
“Probably that once we had signed a record deal that we hadn’t “made it” and that we had only just put the metaphorical ladder up against a huge wall and now we had to climb it. That most artists would be back at their original jobs within 5 years. All that kept us grounded and extra focused I think. One of the biggest surprises in our career has been that we’ve actually sustained a career in music for 18 years. I think that’s something to be proud of.”

Below are the HOOBASTANK fall U.S. headlining tour dates. For tickets: http://www.hoobastank.com/tour.html. 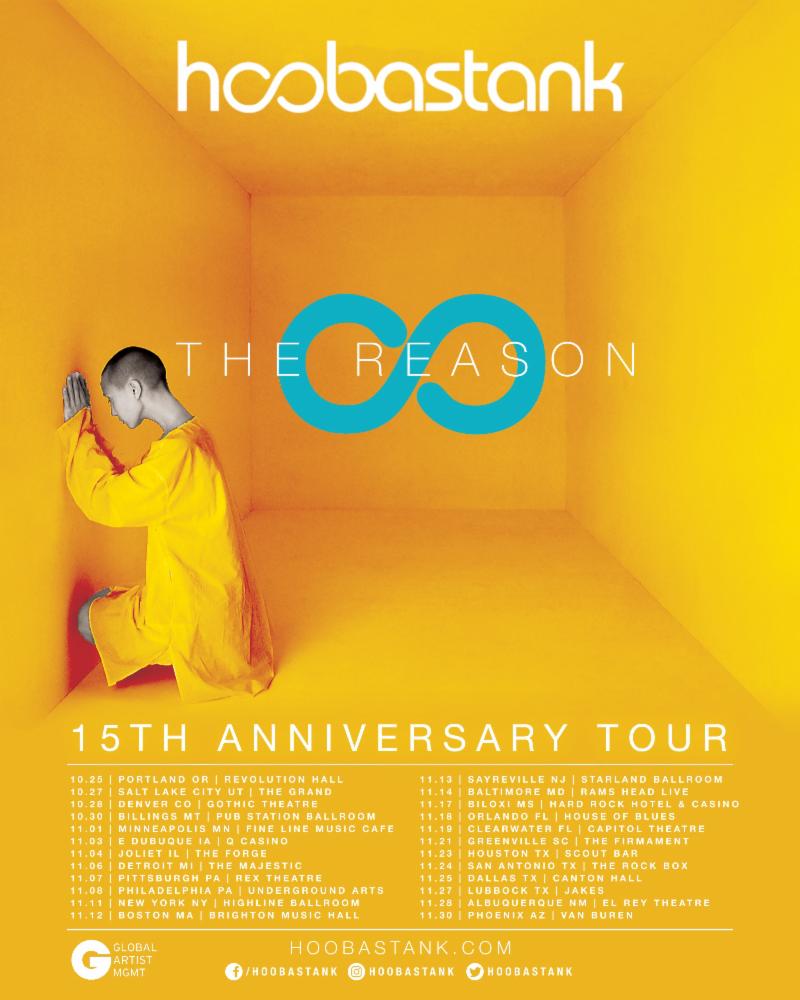 For more information on HOOBASTANK, visit: 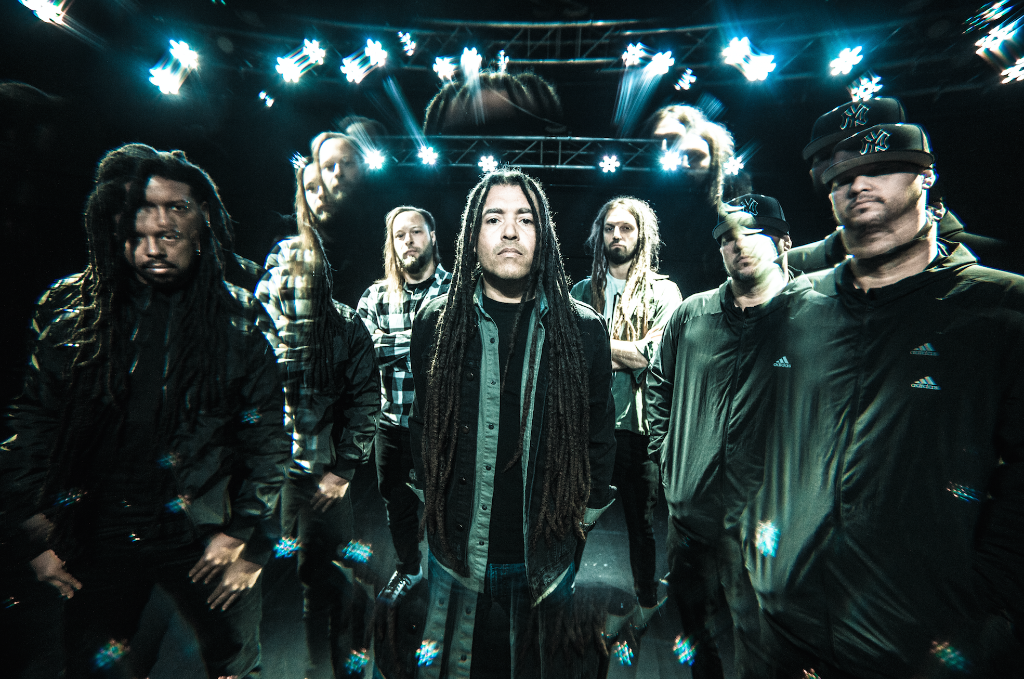 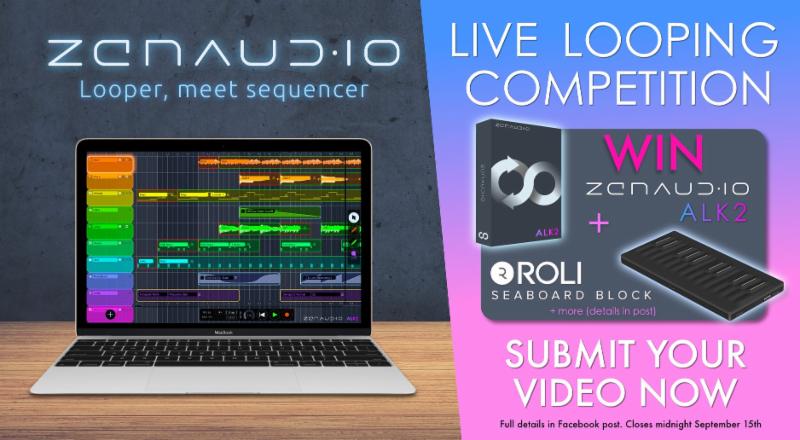