Cumberland, RI USA (April 4, 2019) — Akai Professional, a leading manufacturer of music equipment for performers and producers, announced today in conjunction with Splice the immediate availability of Splice integration in Force, MPC Live and MPC X; a pivotal series of updates that offer users immediate wi-fi access to their own Splice library directly from the touch user interface – perfect for ultra-fast auditioning of sounds for use within Force and MPC projects.

Splice Sounds offers artists millions of easily downloaded sounds, from Dry claps to Buzzy 808s to 747s landing to that rare Zildjian 20-inch thin China crash, and everything in between. The possibilities for layers, filters, distortion and effects are virtually endless. Millions of musicians - from Top 40 hitmakers to bedroom producers - come to Splice to get started or unstuck, move forward and make progress on their music. 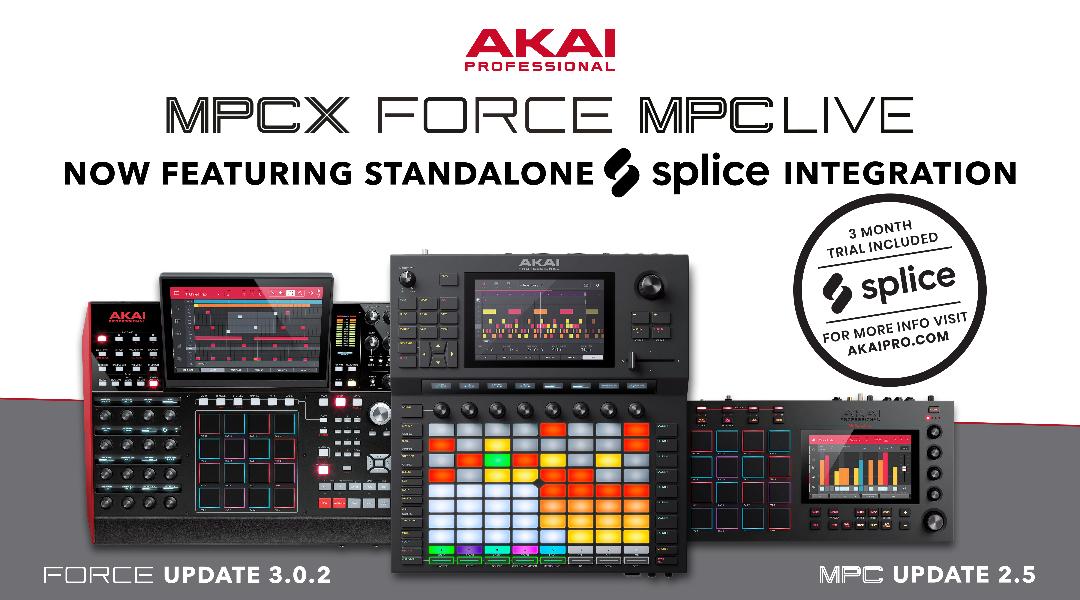 “Force and the MPC Series have taken the world by storm, offering a series of true production and performance powerhouses, creative sketchpads and modern performance essentials for the music making community,” said Dan Gill, Akai Professional Product Manager. “Now with Splice integration, our Standalone Series provides immediate access to some of the most sought-after sound content available, for a degree of expanded creative potential never before seen in standalone devices – a virtually limitless world of class-leading, in-demand sound content is now quite literally at your fingertips.”

“Akai Professional has engineered the next evolution in tools for immersive creative expression and it is fitting that Splice integration is included as part of MPC and Force’s new feature-set” said Matt Aimonetti, Splice Co-Founder and CTO. “Splice has spearheaded the trend for on-demand sample content provision, and with immediate access to user’s libraries directly from Force’s and MPC’s touch interface, creating something new or adding that missing piece to your latest masterpiece has never been this easy or intuitive”

Splice integration is included as part of update 3.0.2 for Force, and update 2.5 for MPC Live/X; both updates are available immediately.