Options for playing live without a real amplifier have come a long way in the past ten years. Just think. There were no iPads ten years ago, and amp modeling was still in its infancy. But today, if you don’t want to use a tube amp and pedals or rack gear, you have numerous options. However, some of those options are rather cumbersome or jury-rigged for use in the live setting.

Some of the sonic nuances that we drool over when playing alone with our premium amps and effects are indistinguishable in a live setting where less expensive gear my suffice. Thanks to IK Multimedia’s iRig Stomp I/O, we can now access thousands of dollars’ worth of equipment with just a swipe of a finger. However, taking the leap into the virtual world is tough for musicians who aren't used to virtual instruments.

Running a virtual guitar rig off of a tablet hasn’t been as straightforward as using a dedicated modeling foot controller, but iRig Stomp I/O definitely makes using your iPad a practical live solution. It’s an audio interface and MIDI controller that provides real footswitches plus an expression pedal in a relatively compact setup. The device is meant to work seamlessly with AmpliTube and other IK Multimedia programs but can also be configured to work well with other programs that respond to MIDI control.

The iRig Stomp I/O features 24-bit A/D/A conversion with sampling rates up to 96 kHz.  The device can be USB bus powered when used with a computer or DC IN when used with iPhone/iPad or a laptop. Connections are via USB B-Type and Mini-DIN.  The device is housed in a durable metal enclosure and features a rubberized device bay that accommodates many different sized devices

Top panel controls on the unit includes four metal foot-switches with one dual color (red/green) LED for each. There are two analog potentiometers for input gain and output volume, each with a four-segment i/o meter.  There is a “Stomp Mode” LED and a “Phantom 48V” LED.  In addition, there is a continuous expression pedal equipped with a virtual switch (press down hard) with its own dual-color LED. 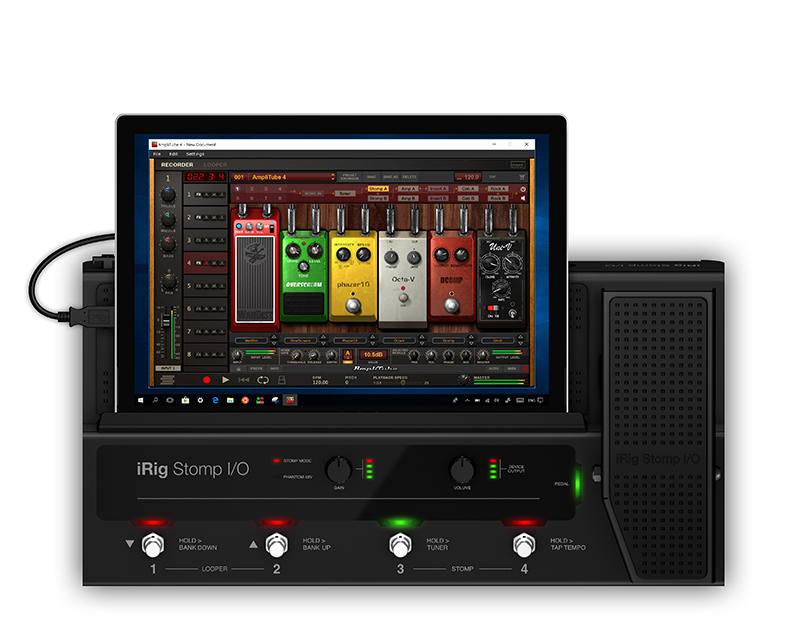 The rear panel of the device includes all the inputs and outputs. There is a Neutrik combo socket for the microphone/instrument input (auto selecting), a +48V phantom power switch, ¼’ headphones output, two ¼’ TRS balanced floating line outputs, MIDI I/O five-pin DIN connector, two ¼” TRS external controller sockets, B-type USB socket for connection to a computer (MAC/PC), Mini-DIN iOS connector for connection to an iPhone or iPad, and a barrel DC-in socket for powering up the Stomp I/O and charging your iOS device at the same time.

Compatibility for iOS devices and computers can be found at https://www.ikmultimedia.com/products/irigstompio/index.php?p=specs .

The first thing we noticed was that the mostly-metal unit was very solid and well built. This wasn’t made with cheap plastic. The controls were well laid out and the lights made it very clear when a switch was on or off and what mode the unit was in. All the plugs and dials seemed well made and sturdy. The matte black color was very contemporary and stylish and the rubber pads on the bottom kept the unit stable and prevented it from sliding.

With the enclosed cables, we had to place the iPad either on/in the device bay or adjacent to the unit as the included lightning cable was fairly short. The device bay allowed for different size phones and iPads and kept them in place with its rubber padding. This device flexibility is very desirable as it will allow the unit to be used for a long time regardless of changes to phones and tablets. Using a longer lightning cable will facilitate moving your iPad or iPhone to a mic stand for an alternate setup. 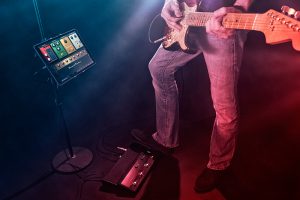 As an audio interface, it was basically plug and play. We connected the unit to the power supply, attached headphones, hooked up an iPad Pro, and pulled up AmpliTube and other programs and we were ready to play. AmpliTube worked without a hitch, though there was an occasional glitch with other programs where the sound would suddenly cut-out and we had to unplug and reattach the lightning cable. On one of the programs, we had to start the app first and then plug in the lightning cable. This was more likely due to the program itself and not a fault of the Stomp I/O.

The inputs and outputs were well laid out and with some basic reading of the manual, we were able to connect it to any output we desired whether it was headphones, powered speakers, or a computer.

As a MIDI controller, we decided to dedicate some time to reading the manual before trying it on the iPad. It is meant to work seamlessly with AmpliTube and other IK Multimedia apps but can also be set-up to work with the other popular guitar/bass apps including ToneStack and PositiveGrid programs Bias, Bias FX and JamUP, and Agile Partners AmpKit.  As a MIDI controller our enjoyment of the unit varied based on the program we were using. Each of the programs we tested it with had different ways of setting up the MIDI programming and assigning CC messages. Guitarists like plugging things in and playing so setting-up the unit to work with each program can be a little tedious, but that is no fault of the iRig Stomp. Stick to AmpliTube and you’ll never have a configuration challenge.

After updating to the most recent version of AmpliTube on our iPad Pro 2017 model, when we started up AmpliTube and went into Live mode (button in upper left corner of the AmpliTube app), the four active rigs (presets) were listed clearly on the bottom and labeled one through four to coincide with the four footswitches on the Stomp IO. The four footswitches sent Program Change (PC) messages to the four banks. To change to the next bank of four presets, we could either swipe the iPad screen or utilize the Bank Up/Down features of the Stomp IO. Holding down switch 2 for more than one second switched to the next four presents. To go back to the first four presets, we just held down switch 1 for more than one second. With memory for up to 128 presets, this hardware/software combination has your next gig easily covered. And, we could easily access the tuner by holding down switch 3 for more than one second.

Within a preset, we could switch to Stomp mode by holding down switches 3 and 4 simultaneously where within a preset we could turn individual pedals on and off. For instance, turning on a boost pedal for a solo section.

The tuner was easily accessible, and having a nice, large, well-lit tuner displayed on the iPad screen made tuning simple.  Also, there is an additional feature of the tuner in that the LEDs on the footswitches also showed if we were sharp or flat.  Unfortunately, however, when activating the tuner, the sound was not automatically muted on the iPad. This should be resolved as it’s an important concern for live use.

There was a bit of a learning curve to using the built-in phrase looper, as the manual for the Stomp IO only explains what each switch does but not really how to use the looper.

With other programs, we were able to use the iRig Stomp IO as an audio interface and a generic MIDI controller. For most basic functions, there are limited MIDI messages that need to be programmed for the main uses of the iRig Stomp IO. A guitarist is mainly going to use the four footswitches (on/off), the expression pedal, and the virtual switch (on/off) for the expression pedal. Configuring them in our different guitar apps varied by program being used. Also, in the non-IK Multimedia programs, we had to be careful to save our programming or all was lost the next time we pulled up the program.

Looper and tuner options were not available in the non-IK Multimedia applications we tested.

Other than the variety of outputs available, the real feature that sets this apart from other products is the combination of an expression pedal with a virtual switch. With any other product on the market or set-ups that people have jury-rigged, the on/off of the expression pedal is a separate switch. Would you want to turn on and off your wah pedal with a switch separate from your wah pedal? No way! So the virtual switch allows you to turn on and off the expression pedal by pressing down firmly on the pedal just like a real wah. But it’s a virtual switch and not an actual switch like the other switches on the device. Although the wah pedal and virtual switch worked right out of the box with the stock wah in AmpliTube once we recalibrated it, we did have to program the pedal to work with other expression pedals added to AmpliTube after the fact such as the Slash Wah Distortion, available as an add-on purchase.

The biggest problem we found, which was consistent across the board when using the switches in AmpliTube, was the very slight but noticeable latency from hitting the switch to the patch change. Turning a pedal on and off or switching presets all experienced a slight delay, that although brief, was noticeable. This seems to be more of a problem with virtual switching even when using a mouse or touching the screen but could be an issue in certain playing situations.

There are a number of different ways to use the iRig Stomp I/O. In its simplest form, it is a durable audio interface that can also power an iPhone/iPad. You can of course plug in some headphones and enjoy the quality of today’s amp modeling programs without disturbing anyone. But the robustness of this device comes from its outputs and being able to connect to a mixer and PA system in a live setting and leave your amp and pedals at home. The device itself is a middleman between your instrument and the tablet or computer while at the same time providing a diverse number of outputs. Overall, the tone was excellent. The sounds and feel were more dependent on the program being used rather than the device itself.

One of the problems with software and virtual devices is explaining how to use in an easy-to-use and straightforward way. As stated, this is an audio interface and MIDI controller. It is recommended that the user learn some foundations of MIDI and get a basic understanding of Program Change (PC) messages vs. MIDI Control Change (CC) messages [read our tutorial here].

The manual lacks depth for someone who has little experience with MIDI, so taking a little bit of time to learn the basics of MIDI can really help. A supplementary manual was created by IK Multimedia with brief explanations how to use and program the device on the iPhone/iPad with the main amp modeling programs of AmpliTube, Bias, Jamup, Tonestack, and  AmpKit.

A carrying case is available separately for purchase for $49.99. 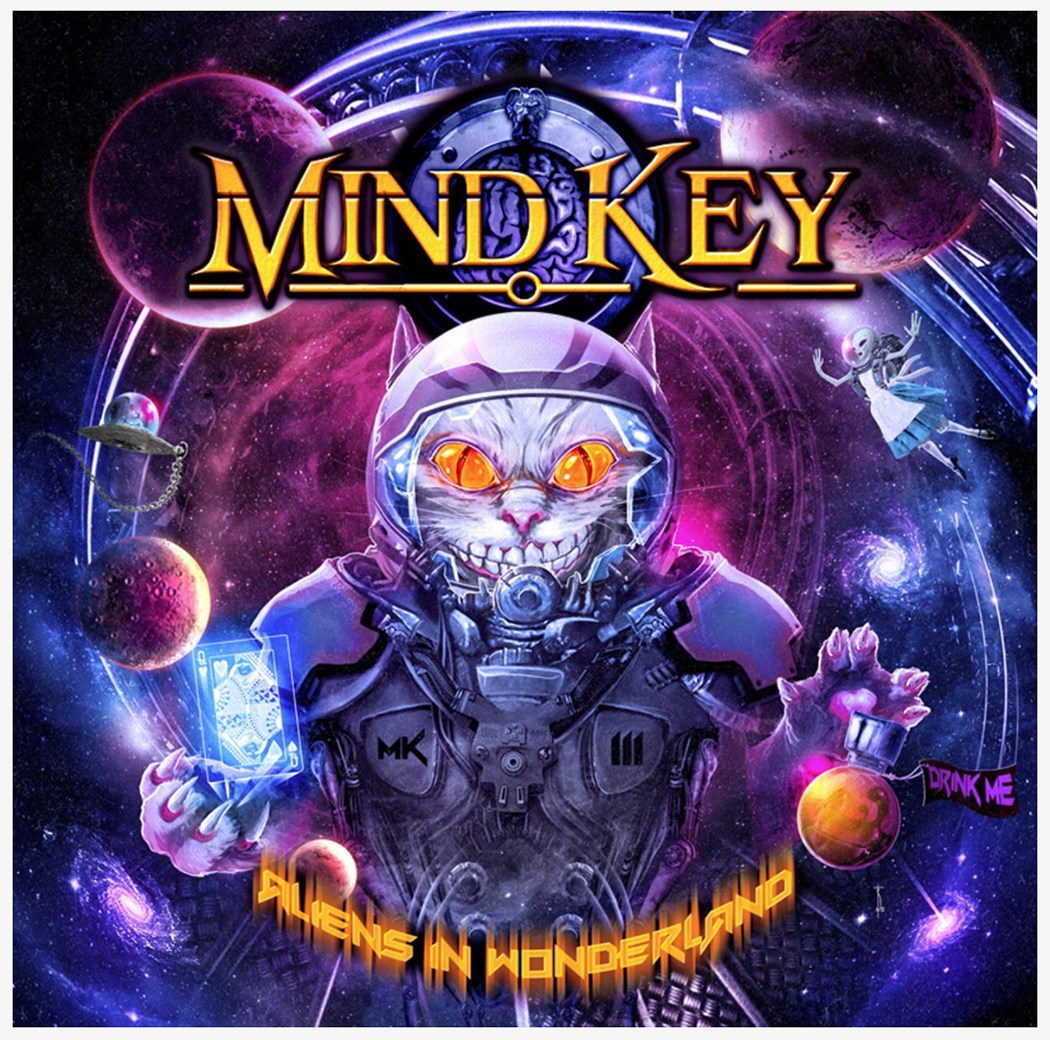