Here we are… again! Yamaha has received a lot of attention for their flagship Montage synthesizer since we first reviewed it in 2016.  You can read our in-depth review of the Montage synth here.

Then, earlier in 2019 we reviewed the Montage OS 2.5 update, which is detailed here.

Not ones to sit around, Yamaha continues to update and improve the Montage, bring us to the latest OS update, now at version 3.0. To quote Yamaha, the 3.0 release offers:

While it sounds trivial at first, the expanded range of the LFO opens up new sonic possibilities. You can go really slow, making the sounds very organic and analog sounding, or really fast, making sounds sound very industrial or insect-like (if that’s your thing). This extended range is actually switchable, so you don’t always have to use it.

The effects Yamaha are referring to are Virtual Circuit Modelling (VCM) Mini Filter and Mini Booster respectively. The VCM Mini Filter is a classic four-pole 24 dB/octave filter, perhaps made most famous (and certainly often copied!) by Moog synthesizers. The Cutoff, Resonance, Dry/Wet mix, Input Level and Output Level can all be assigned to a Motion Sequence, the Envelope Follower or actual physical controls (Super Knob, Assignable Knobs, Modulation Wheel). There are several presets to get you started, labelled 1970s LPF, 1980s LPF, modern LPF, and so on, and presets for HPF as well. You can also pick a texture type from retro, standard, and modern, generally getting brighter sound as you “move through time,” so to speak.

The Mini Booster’s parameter settings are similar, with retro/standard/modern setting as well as 70s/80s and modern Boost presets.

The Wave Folder effect is interesting. Instead of clipping, which removes the top part of a given wave that exceeds the peak value accepted, the Wave Folder effect “folds” those previously clipped peaks under the threshold line, resulting in an increase in harmonic content.

There are 52 new performances, representing new sound additions to both the Montage and MODX. This brings the onboard content total to 2,707 Performances.

One of the more notable new features is a Pattern Sequencer. Essentially, this adds multitrack, loop-based sequence recording to the Performance Recorder. This can get quite complex, as each pattern has up to eight Sections and each Section has up to 16 Tracks. Sections are selected by using the Scene buttons on both the Montage and MODX. Players who create music using loops will have quite an arsenal of possibilities at their disposal. Yamaha explains it as below: 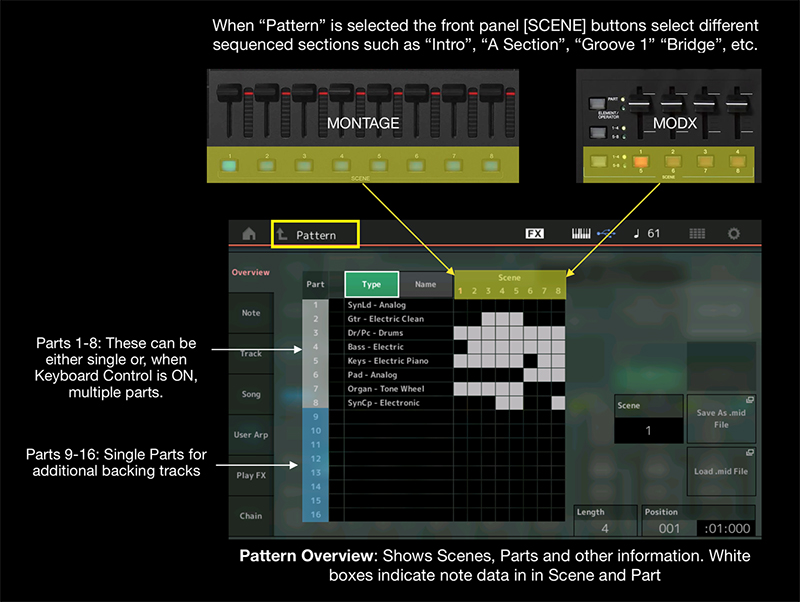 A nice feature is that each track can vary in length, up to 256 measures. Each track can even have its own time signature. Wow! In addition, the “PlayFX” allows for quantization, note, clock, velocity, and swing adjustments in a non-destructive way, allowing the track feel to be adjusted as you see fit. Changes are committed only after you press the “normalize PlayFX” button.

Also on the subject of patterns, adding a rhythm pattern (i.e., a drum part with arpeggio) to a performance has been introduced to the Montage (it previously existed in the MODX). Hold [SHIFT] and then press [CONTROL ASSIGN] and the Rhythm Pattern screen appears for you to select a drum kit along with a corresponding drum arpeggio. This is a great way to quickly add a backing track to your music.

The new USB MIDI Host function is pretty cool. It enables you to play the internal MONTAGE sounds directly from a class-compliant USB MIDI controller without a computer. There is also increased MIDI choices within the OS, in the form of “Hybrid MIDI I/O mode”. In Hybrid MIDI I/O mode, you can separate the Parts you want to play and control locally from the Parts you want to control remotely.

Overall, we think the updates are welcome additions, and will be most useful in the studio for sound sculpting and loop creation, though banks of new sounds are always welcome regardless of your specific need. Still, our previously-asked question remains: can Yamaha design a CS-80 emulation be put into the Montage? Now that would be something!