No matter how technology progresses with effects, amp modeling, and signal processing, one simple fact remains constant: you have to connect your guitars to your amps! Wireless systems have been around for some time, and Audio-Technica’s 3000 Series wireless system is a solid performer that maintains a very good balance of features, ease of use, and price.

Sonically, this is a good system, though it isn’t as refined as other products in its class. We were very happy using it since the audio quality was good, and it was fairly easy to troubleshoot the few times we needed to. However, there were a few elements we wished were different, most notably the poorly-designed power supply. While there are some easy workarounds for the few issues we had, they limit this unit from being the ultimate plug-and-play wireless system.

The 3000 Series is a 200-channel UHF wireless system designed for a wide range of applications. We tested the ATW-R3100 receiver and ATW-T310 UniPak™ transmitter.

Both the transmitter and receiver have LCD displays that are easy to read. However, unlike the receiver, the transmitter does not have a backlit screen – likely to preserve battery life. The transmitter runs on two AA batteries (not included).

The receiver shows the transmitter’s battery life at all times (in addition to the transmitter), which is a very nice touch since it’s easier to glance at your rack than at the transmitter attached to your guitar strap during a performance.

Although the included rack ears made installation into our guitar rig easy, there was no provision for moving the antennas from the rear of the receiver to the front of our rack, common with other products in its class. If your wireless system is placed beneath deep equipment in a rack, you may have difficulty aligning the antennas upward in a 45-degree angle (as recommended by Audio-Technica), and having the antennas hidden behind your rack could cut down on the system’s usable range. An optional kit is available for relocating the antennas to the front of your rack, something you’ll need to purchase when placing this system into a guitar rack.

Further, the ATW-T310 UniPak transmitter does not include the special instrument cable necessary to connect your guitar to the transmitter. Be sure to review our price section to make sure you order all the parts necessary to get up and running with this system.

There were some minor but surprising items that arose with this system. Though we were evaluating the instrument version of this product, unbeknownst to us, the receiver’s default setting was for receiving a microphone signal. As a result, our system (using a guitar) did not produce any sound when we hooked it up.

After checking everything a few times, and making sure the frequencies were correct, we finally discovered in the User’s Guide that the default settings were for a microphone signal and needed to be changed for instrument use. We think a bright-colored “Read This First” paper notice would be useful to include with the packaging of the transmitter so that musicians will know immediately that an adjustment to the factory defaults is necessity (of course, MusicPlayers.com readers shouldn’t have any problems since you’re now aware of this minor-but-crucial detail).

Settings on the UniPak transmitter were navigated by a series of simple menus, which include Input Selection (microphone/lo-impedance or instrument/high-impedance), RF Power (to boost the signal, though it means shorter battery life), Audio Input Level (to choose between -6 dB or other levels), and Frequency. We found the meter hold function particularly interesting: when set to On, the receiver displayed the highest and lowest audio signal levels received as bars on the LCD display, useful for initial system configuration or troubleshooting.

We used the ATW-3110a system in two settings. The first was with a five-piece band utilizing two other wireless systems from other manufacturers. Our Audio-Technica 3000 system worked very well with no problems. Dropouts did not occur, and there was no interference to or from other systems.

Our biggest complaint has to do with the horrible power supply. Rather than an internal power supply, or even a typical wall wart, the Audio-Technica system uses a “middle of the cord” wall wart. While this may be suffice if you are placing the unit on top of a guitar amp, it is not acceptable to have a loose wall wart rolling around in the back of your equipment rack. Tape or Velcro will provide a simple fix inside your rack, but a better-designed power supply should have been implemented.

The ATW-3110a system sounded very good. The system was quiet and did not produce any distortion or noise in our guitar signal. The sound was almost as good (or as bad) as our playing!

If you’re just stepping up from an older and less expensive system, you shouldn’t be disappointed. The frequency response is rated at 70 Hz – 15 kHz. Your guitar’s normal frequency response falls slightly below 70 Hz, and we found the wireless guitar tone to sound slightly compressed compared to our wired tone.

Tests using a single-coil Fender standard strat and a Schecter guitar with Duncan Design humbuckers and a piezzo bridge revealed that sonically, our wireless sound was full and rich, but the wireless sound was slightly brighter than our wired sound, apparently getting a mid-high EQ boost with a slight roll-off of the lowest bass string frequencies. While you can compensate for this with slight adjustment to the EQ on your amp, if you routinely switch back-and-forth between wired and wireless (during rehearsals vs. live on stage), this could become a minor annoyance.

The bass roll-off combined with the very slight compression resulted in less overall richness or depth of tone, but it was only apparent when strumming acoustic passages using the piezzo pickup in our Schecter or playing other clean rhythms on the guitars. For our distorted sounds, the Audio-Technica system sounded great. In a live setting, your fans should not be able to detect this subtle difference in your acoustic tones.

Overall, Audio-Technica did a good job of explaining features and how they work. Unlike many other manuals, there were even brief explanations of terms used in sound production. This was a well-designed, to-the-point manual that will enable anyone to get up and running with the system… but it should still draw better attention to the details regarding Mic and Instrument level settings!

The Audio-Technica ATW-3110a wireless system ($699 MSRP) sells for closer to $400. You need to add the AT-GCW instrument cable ($24), and if you plan to install this in your rack, also be sure to order the ATW-RA1 kit ($48) for mounting the antennas in front of your rack.

Despite the “a la carte” offerings, this system is still well priced compared to other systems in its class, and this may place a good UHF wireless system within your price range. 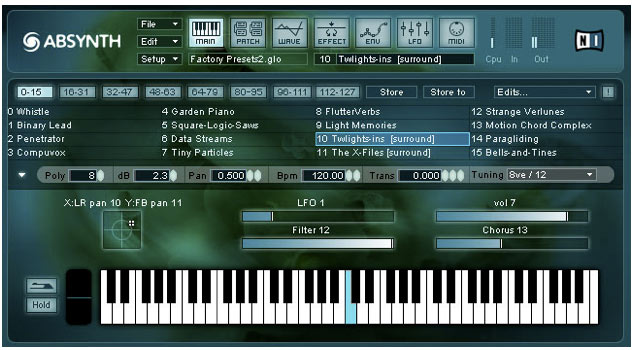